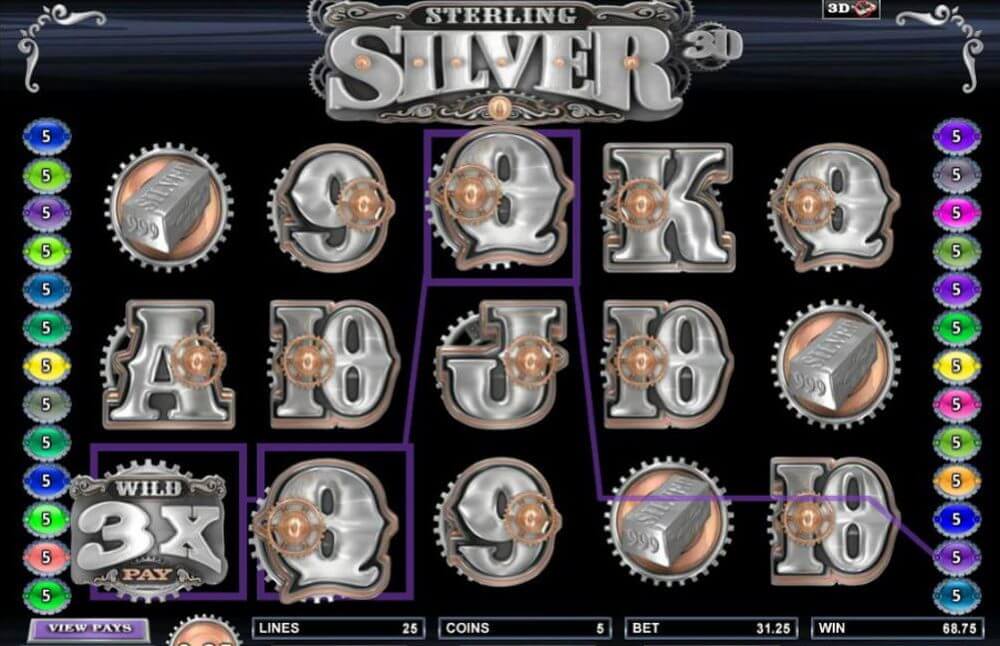 We’ve seen plenty of 3D movies and video games, but what about online slots? Read through our Sterling Silver 3D slot review to find out if there's any difference in how to play a three-dimensional title, compared to regular 2D game. We’ll explore whether 3D slots offer any interesting additions, or if they’re simply a gimmick.

In our review of Sterling Silver 3D slot, our experts analyse various aspects of Microgaming’s title. Some of the topics we’ll cover include:

Better grab those 3D glasses before you play…

A shiny bonus round

Get 15 free spins with a 2x multiplier, or random multiplying Wilds

Upon first play, the Sterling Silver 3D slot appears to allow players to adjust only their bet at the bottom of interface. However, you can find more options to the left. You can adjust both the coin size and number of coins per line. This makes for a bigger Max Bet than it first seems.

Set your bet size and check out the paytable – always make note of where the game’s paylines lie. After that, you’re ready to start spinning the reels (after donning your 3D glasses, of course). If you have none, the game does have a 2D version. The only thing is that it differs slightly in the bonus round, which we’ll talk about in more detail later.

As for its layout, it’s fairly standard at 5x3. When looking at graphics and gameplay, there is one clear disadvantage in Sterling Silver 3D slots. All the shiny, silver symbols look very similar – this can make it difficult to see whether a win is developing on the reels. Some symbols or markers in a more diverse colour scheme could have prevented this. The game’s music is also curious. It sounds almost Middle-Eastern in style, which doesn’t seem to echo its theme.

As well as the symbols listed above, the game features a Sterling Silver Wild. This can substitute anything except Scatter, but only appears on certain reels. Speaking of Scatters, landing three of these will award you 10x your total bet. Not only that, you also get a round of 15 free spins. In Sterling Silver 3D’s bonus round, enjoy a multiplier of 2x throughout.

There are different features in the two-dimensional version of the game. In this, multiplying Wilds between 2x and 10x simply appear at random. Although both options are profitable, players may be more drawn to the 2D version’s potential.

At 1000x, the base Sterling Silver 3D jackpot is $62,500 when playing at Max Bet. Remember that bonus round multiplier as well though. As for the jackpot, you can trigger it with five ‘Three Silver Bars’ symbols. It’s not a shabby payout, but does not chime particularly well with the name of the title. Players drawn to this game, fascinated by glitz and wealth, will be expecting a far bigger sum than that.

There is a mobile version of Sterling Silver 3D, but not everyone may be keen to play on mobile. Even the biggest fans might not be committed enough to wear 3D glasses on the move. It’s bound to attract a few stares if you’re playing on public transport for example!

Both the 3D and 2D versions of the mobile slot game have compact gameplay areas. The game will play smoothly on iPhone, Android or other smartphone screens. There’s just one problem. As mentioned earlier, it’s not easy to differentiate between the similar silver symbols. When you’re playing slots on mobile, this becomes even more difficult. It’s not something that should stop you from trying it out, but is something to consider before playing on a mobile device.

Despite some disappointing features, Microgaming deserves a lot of respect for launching Sterling Silver 3D. The launch of a 3D game was wonderfully innovative and exciting at the time. However, released in 2015, it may be the case that it jumped the gun. Even in 2023, 3D casino games haven’t become quite as mainstream as many imagined.

To add to this, the general gameplay isn’t very compelling. Playing in three dimensions doesn’t add much to a game with run-of-the-mill symbols and animations. It’s certainly a novelty that a few other titles may look to adopt in the future. That said, 3D play doesn’t really feel necessary to enjoy the game. It’s especially strange that the bonus rules differ between the 3D and 2D versions. Overall, nothing here makes Sterling Silver 3D a must-play slot game. As for the shiny game visuals, it’s worth a few spins if you have some 3D glasses handy.