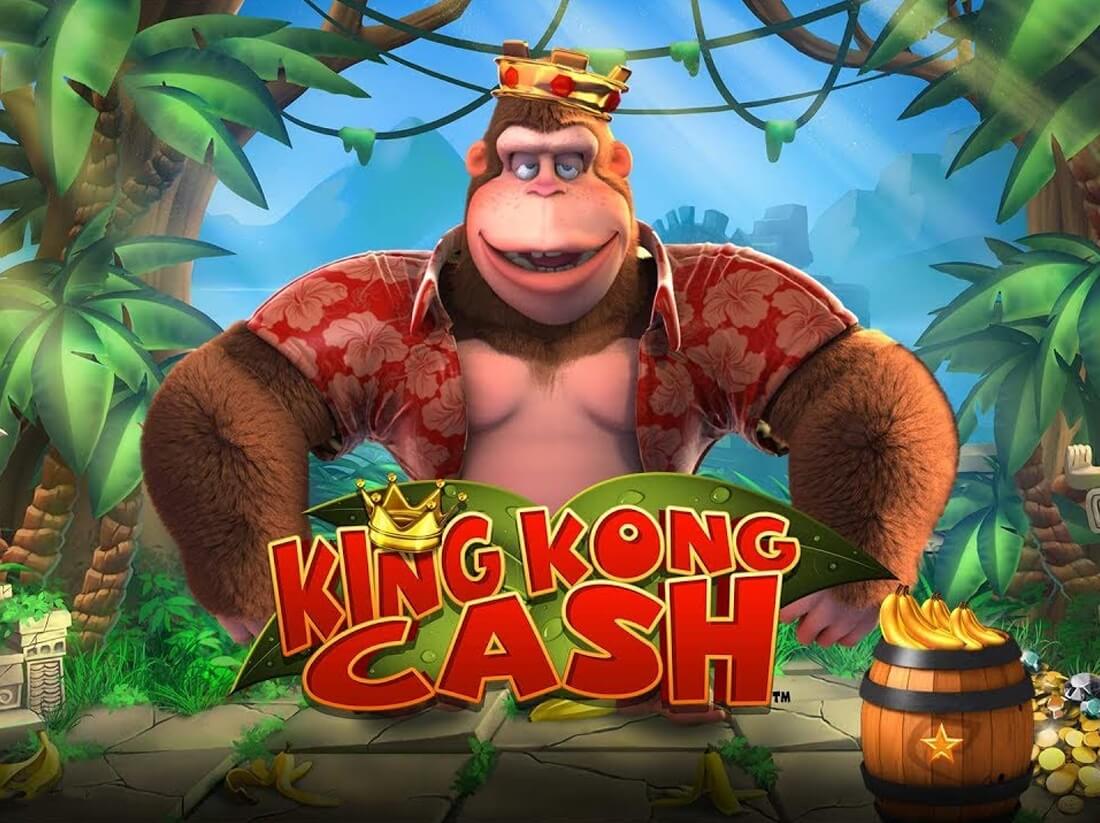 From developers Blueprint Gaming, the King Kong Cash slot is based on the legend of the giant monkey Kong. This 20-payline machine is packed full of bonus features. No less than 9 of them in fact.

Players can enjoy spinning the 5 reels from as little as 20p stakes and see their bankroll boosted with 1 of 5 monkey modifiers, together with a bonus big money feature that could net you up to 1,000 your bet amount.

In this King Kong Cash review we'll take you through the game's many special features, showing you precisely where the most money can be made playing this virtual video slot machine for real stakes in 2022.

Read on to learn:

Land a top payout of up to 1000 times your stake amount.

Discover 20 ways to win in this top Blueprint Gaming slot.

If you're the type of player who gets a kick out of multiple bonus features then you'll love the King Kong Cash online slot. This amazing virtual machine from Blueprint Gaming offers players 5 reels and 20 paylines from just 20p stakes. With a whopping 9 bonus features, the slot gives players even greater chances of walking away a winner.

Plus if you like to bet big, the King Kong Cash slot machine accepts wagers of up to £500 a spin, so there's no shortage of action for high rollers to get involved in. Not least of all, there's also a chance to trigger payouts of up to 1000x your stake.

Try out the King Kong Cash slot right now for free, or if you want to advance to real moey betting, click on any of our top rated casinos on this page.

There's no shortage of symbols flying by as you spin the reels at King Kong Cash. But while you might think the monkey delivers the highest returns, you'd be wrong. In the main game at least it's the King Kong Cash symbol that will award you up to 500 coins for five matches across a payline.

When King Kong wakes, players are in for a treat

You could be forgiven for thinking that waking a sleeping giant monkey is a terrible idea, but in King Kong Cash it's just the opposite. Whenever the snoozing ape suddenly stirs, a great bonus is about to be unlocked.

Banana Canon Wilds - fired from Kong's cannon, will turn reel symbols into wilds at random. The Golden Barrel Super Spins launch exploding barrels onto the reels which change into the same random symbol, awarding players with an extra win.

There's also the Spin Streak feature, where King Kong hammers the reels with a mallet to trigger re-spins. These continue until a winning match is made. Finally, there's the Bonus Boost, where barrels added to the reels increase your chance of unlocking the slot's main bonus features.

When you land three of the King Kong symbols on the reels you'll unlock the best bonus games this Blueprint Gaming machine offers. A spin of a wheel will reveal which one it is you've been lucky enough to land. There are four bonus games available to play, these include:

Empire Free Spins, which catapults players from deep in the jungle to the top of the Empire State building in New York. You'll be playing this game on a completely unique set of reels. The idea is to gather as many golden money symbols as you can before a bomb symbol shows up.

If you land Barrel Blast, you need to pick 3 of the same barrels to win a prize, while 3 Golden Monkeys will take you to the Big Money bonus game. In King Kong's Trail, the action takes place in an old school video game, where again 3 Monkeys can trigger the main bonus. Last but not least is the Free Spins feature, where you'll play on 5 reels with 40 paylines, and collect wilds for a chance to land super spins.

The final of King Kong Cash slot's 9 incredible bonus features is the Big Money Bonus. This is where that top payout of 1000 x your betting stake can be unlocked.

You can only make it to this level via one of the previous 4 bonus games, so pray that you land those lucrative Golden Monkeys (whilst in any of King Kong Cash's bonus features) as these are your golden ticket to that x1000 stake prize.

Slots traditionalists might be put off by King Kong Cash's features, but not us

With 9 different bonuses breaking up the reel action on the King Kong Cash online slot we can appreciate why some old school slots players might give this one a swerve. For us, King Kong Cash Slot scores top marks for offering these fun bonus features.

We're big fans of games that take advantage of the online platform, but not at the expense of style over substance. With medium variance wins, even at lower stakes, no one can accuse King Kong Cash slot machine of that.