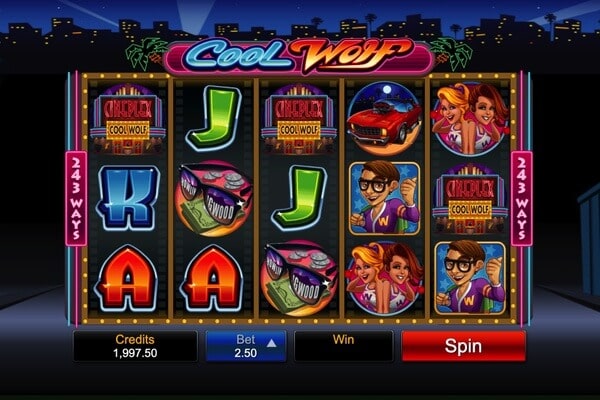 Created by Microgaming, Cool Wolf is a five-reel slot that adopts a ‘60s high school theme – with a terrifying twist. Players will follow the life of a spectacled school kid who transforms into a werewolf by night, decked out in cool shades, and ready to terrorize the town. The theme is without a doubt a key selling point to Cool Wolf and channels cult horror classics through the world of teens, cheerleaders, and all things that go bump in a night. Beyond the design, the game has 243 different ways to win as well as free spins, multipliers, and Microgaming’s trademark cascading reels. Keep reading for our full Cool Wolf Slots review.

Find more winning combinations on each and every spin

The more you match up, the more spins you’ll get

How to play Cool Wolf slot

Playing Cool Wolf will be familiar to lots of players. This is a standard five-reel, three-row slot with 243 different ways to win. All this means is that players won’t have to pick how many lines they want to play, instead, every possible winning combination across the reels will score a win. It makes the gameplay easy to understand – just line up three or more matching symbol from left to right for a payout.

The reels are loaded with symbols that suit the theme and have everything players might expect from a retro American horror film. This includes a Chevrolet under a full moon, two cheerleaders, a cinema billboard, a cool pair of shades, and the glasses-wearing protagonist of the game. All of these icons are mixed in with standard playing cards which make up the lower value symbols.

To bet, players can place as many as 10 coins on each line. There are some useful in-game customizations available too including an auto play mode which lets players continually spin the reels without clicking the ‘Spin’ button over again. Overall, Cool Wolf is a simple slot with straightforward rules and that’s enjoyable to play.

Free spins are a big part of Cool Wolf. The movie ticket symbol is the game’s scatter – land three or more anywhere on the reels and you’ll get to spin for free. Hitting three scatters gives 15 free spins, four gets you 20, and five gets you 25. The cascading reels feature will also be active while you’re spinning. This will replace any winning slots with symbols that tumble down from above, causing a multiplier of up to 10x for each consecutive win.

Then there’s the ‘Howling Wild’ bonus – this feature is randomly triggered throughout the game and turns one of the reels entirely wild. This is a nice feature and more often than not guarantees a win. We also found that this bonus feature was a pretty regular occurrence and added a real thrill to the game. It’s worth noting here that cascading reels are not in place once the ‘Howling Wild’ bonus is activated.

Cool Wolf is not a progressive slot, so there’s no jackpot prize on offer. Though this may not sound ideal, we were pleased to see that the maximum payout still reaches a huge $105,000! There’s a good range of bonus features here to take advantage of, and overall the gameplay feels simple, fun, and suitable for all skill levels. Cool Wolf definitely lives up to Microgaming’s powerhouse reputation.

Like the majority of Microgaming’s slots, Cool Wolf works well on mobile devices. The gameplay is fairly simple which means that it converts well to the small screen without limiting any of the bonus features. We tested it out with different devices – both iOS and Android – and the game worked well across the board. We were impressed with how sharp the graphics looked – another nice touch is the rock ‘n’ roll soundtrack with spooky sound effects. It’s a small detail, but it’s great for mobile players with headphones on.

We’re fans of Cool Wolf. Though the 5-reel format of the game itself is pretty standard, the unique theme really elevates the game. It’s original, creative and really well executed, from the soundtrack to the wolf claws that scratch off winning symbols. We would have liked to have seen a jackpot bonus, but the regular scatters and free spins occur regularly enough to make up for it. If you’re looking for something that reinvents the wheel in terms of effects and paylines, this isn’t it. But if you want a fun and familiar game wrapped up in a really imaginative theme, look no further than Cool Wolf.