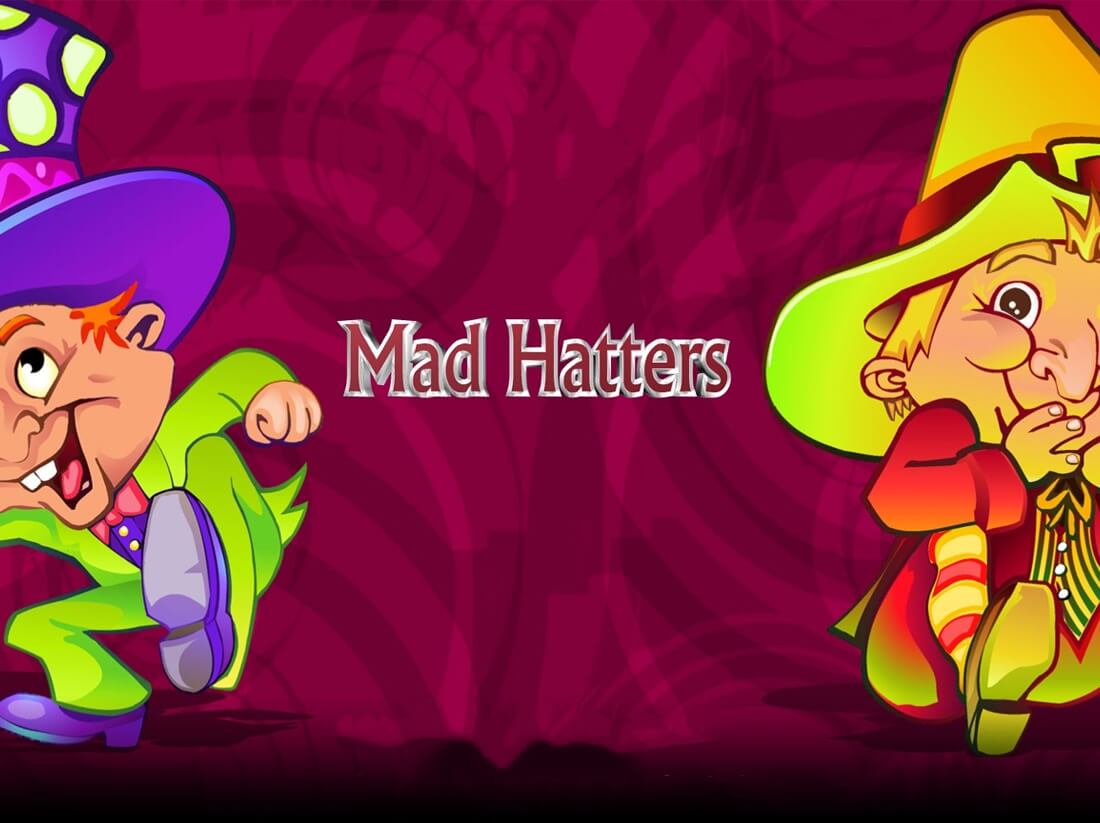 Take a trip down the rabbit hole with Microgaming's Mad Hatters slots. While they don't draw a literal connection to Alice in Wonderland (probably for trademark reasons) the inspiration is clear. With symbols like a crazy cat, tea party accessories, and three different Mad Hatters, anybody who loves Alice in Wonderland will go crazy for this game. Even if the theme isn't your cup of tea, you still owe it to yourself to give Mad Hatters online slots a chance for its many special features and reasonable betting limits. Read on as we cover all of these points in the review that follows.

This game makes use of a simple layout with five reels and thirty paylines. The high number of lines will scare of the super low limit players, but most people will relish the opportunity, especially considering the fact that you can bet up to ten coins on each of these lines. Sure you can cover every line for a mere £0.30 per spin (with £0.01 coins), but the maximum 300-coin wager can be as large as £75 if you are comfortable playing with the £0.25 coins.

Expanding wilds spread across the reels

Get anywhere from 10 to 50 free spins

The Mad Hat is the wild symbol in this slots game. As you may already know, this means that it substitutes for all other symbols in the game with the exception of the scatter symbols (the Bunny and the Cuckoo Clock symbols). This isn't just any old wild symbol, though. It is a special expanding wild! When a Mad Hat symbol shows up on the third reel (the middle reel), it expands to cover the entire row! This makes it significantly easier for you to end up with some kind of winning combination. Not to mention that if you get five Mad Hat symbols in a row (not just the expanding wild feature), you will get the Mad Hatters slot machine's top prize of 20,000 coins!

You can expect frequent wins with Mad Hatters thanks to it's low volatility. However, the pay table below doesn't reflect the maximum wins available with multipliers and free spins.

The top payout available in the entire game

The first scatter symbol, the Rabbit, serves two functions. First, if you see three to five of these on the screen at the same time, they will be good for a 5x, 50x, or 300x total bet payout! This can end up being worth as many as 90,000 coins: the top payout available in the entire game! Additionally, three, four, or five Rabbit symbols will also give you 10, 25, or 50 free spins (respectively). All prizes are doubled during the fee spins and you can choose one of the mad hatter brothers (John, James, or Jeff) to act as a second expanding wild symbol!

The final cool feature offered by Mad Hatters slots is the Cuckoo Clock Bonus Game. To launch this, you will need to see three, four, or five adjacent Cuckoo Click symbols. This is easier said than done, but the bonus game that hides under the surface is worth the wait. When it starts, you will see a collection of cuckoo clocks. Depending on how many symbols were used to launch the game, you will have one to three chances to choose which clocks you think are the luckiest. Click to reveal the prizes, which can be as high as 13,500 coins!

If you're looking for a fun and exciting tea party, you'll need to check out this online slot game. With expanding wilds and excellent bonus rounds, there are plenty of exhilarating moments during the game. Plus, thanks to frequent wins, it's ideal to play no matter what your bankroll looks like. It's surprising to see such a great jackpot on a game giving out so many wins! With £75 000 as a maximum prize, it's obviously why we're all madly playing Mad Hatters.