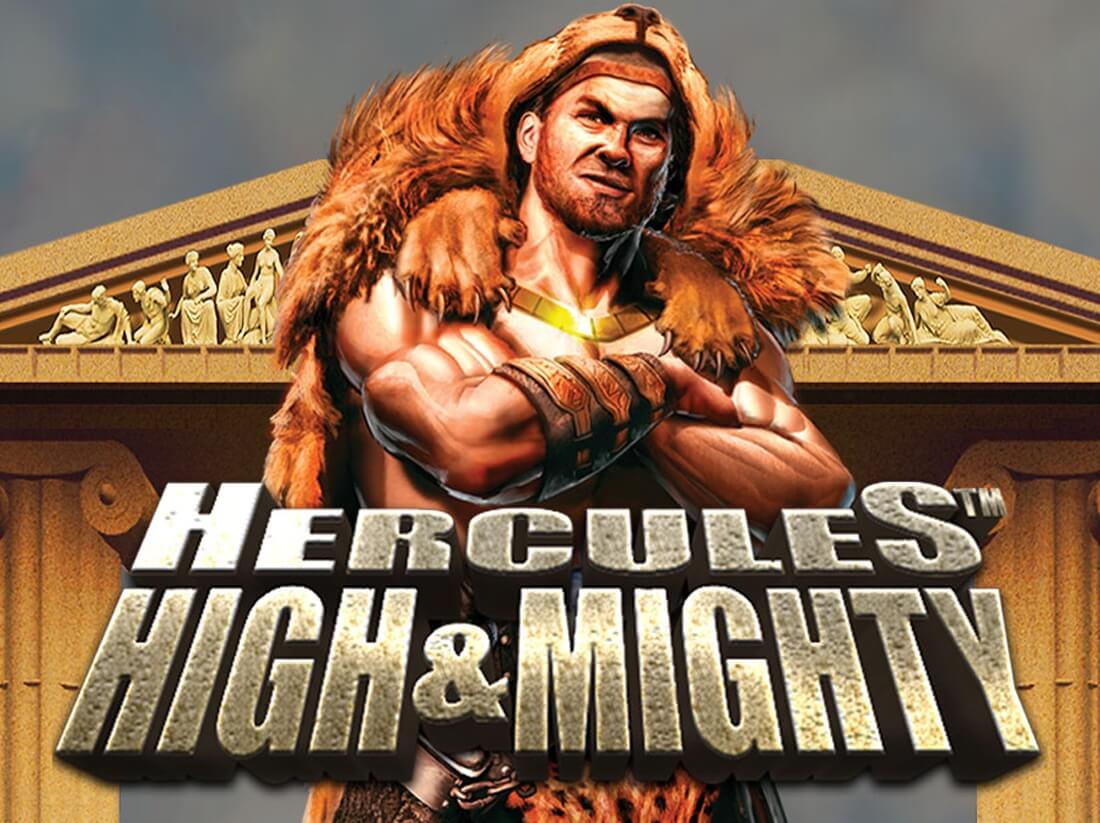 From software developers Barcrest, the Hercules High & Mighty slot is based on a Greek mythology theme. Where Hercules (son of Zeus) is the Wild symbol and Zeus (God of thunder) is the highest paying symbol. The slot has 5 reels and a maximum 100 paylines, depending on the line bet you wager.

Higher stakes in Hercules High & Mighty equal more paylines. And it's wagers of 50p plus that unlock the main game's maximum 50 paylines. This then automatically doubles to 100 when play enters Mighty Reels mode.

Intrigued, our team put their money on the line to bring you this first hand Hercules High & Mighty review, betting with both high and low stakes to test out the slot's main features, including:

Up to 100 paylines available to play in Mighty Reels gaming mode.

High rollers can wager up to £500 per spin on the Hercules High & Mighty slot.

A familiar slot theme updated with a few unique features

There's something about Greek mythology that seems to appeal to online slots developers. So the Hercules High & Mighty slot was always going to need a unique edge to separate it from the pack. Especially since this isn't the first real money game to emerge with Hercules as the hero character.

Thankfully, Barcrest deliver on giving the Hercules High & Mighty slot a few tricks to make it legendary in its own right. First off, it's whacked 100 paylines into the equation. Making this one of the biggest ways to win slots in the Greek myth genre. Secondly, it's come up with an interesting way to introduce Wilds that sees the core game expand in height when these are activated.

True to form, the Hercules High & Mighty slot uses reel symbols straight out of a Greek textbook. There's Pegasus the horse, the Namean lion (who Hercules eventually killed), along with our hero's parents Zeus (God of Thunder) and his wife Hera. The latter of which make up the two highest paying symbols.

Even though Hercules High & Mighty slot has up to 100 possible paylines, the amount in play at any one time is directly influenced by the size of your line wager. So it isn't possible to bet low and access all the paylines.

This privilege is reserved only for those who wager 50p per line or above. And even then only 50 paylines are active in the core game. It isn't until the Mighty Reels mode that players (at the highest betting level) can benefit from all 100 paylines Hercules High & Mighty slot machine offers.

When the expanding wild crops up the game really gets going

Hercules is the Wild symbol in this namesake slot. But instead of replacing symbols on the reels to make winning matches, when Hercules appears the Mighty Reels mode triggers.

In Mighty Reels the amount of paylines you're playing with automatically doubles. You'll know when this is about to happen, as not only will the Hercules Wild expand to fill a whole reel, but you'll also see the game 'lifted up' by the chains it's attached to, revealing more reels as a result.

The free spins scatter is represented by a gold coin and it pays (no pun intended) to land 3 or more of these anywhere on the reels. Doing this gives you up to 20 free spins - without having to eat a penny more into your bankroll.

Finding 3 coins will get you 8 spins, 4 coins 12, and 5 results in 20 - the highest amount possible. If this happens during Mighty Reels you'll automatically retrigger the number of free spins you were awarded. Transforming 20 free spins into 40.

Something our reviewers enjoyed as they conducted this Hercules High & Mighty review is the Big Bet feature. This lets you buy 5 spins for a one-off payment of £20, £30 or £50. The latter two also remove lower value symbols from the reels, increasing your chance of netting bigger payouts.

This is just another way that the Hercules High & Mighty slot seeks to establish its own identity against other Greek mythology themed games in the market, something we can’t help but praise. Add to that the fact you can also play this slot on smartphone and tablet too, and Hercules High & Mighty's stock just keeps on rising.

Even if you're tired of slots that rehash the ancient Greek theme, we'd urge you to give this one a go.