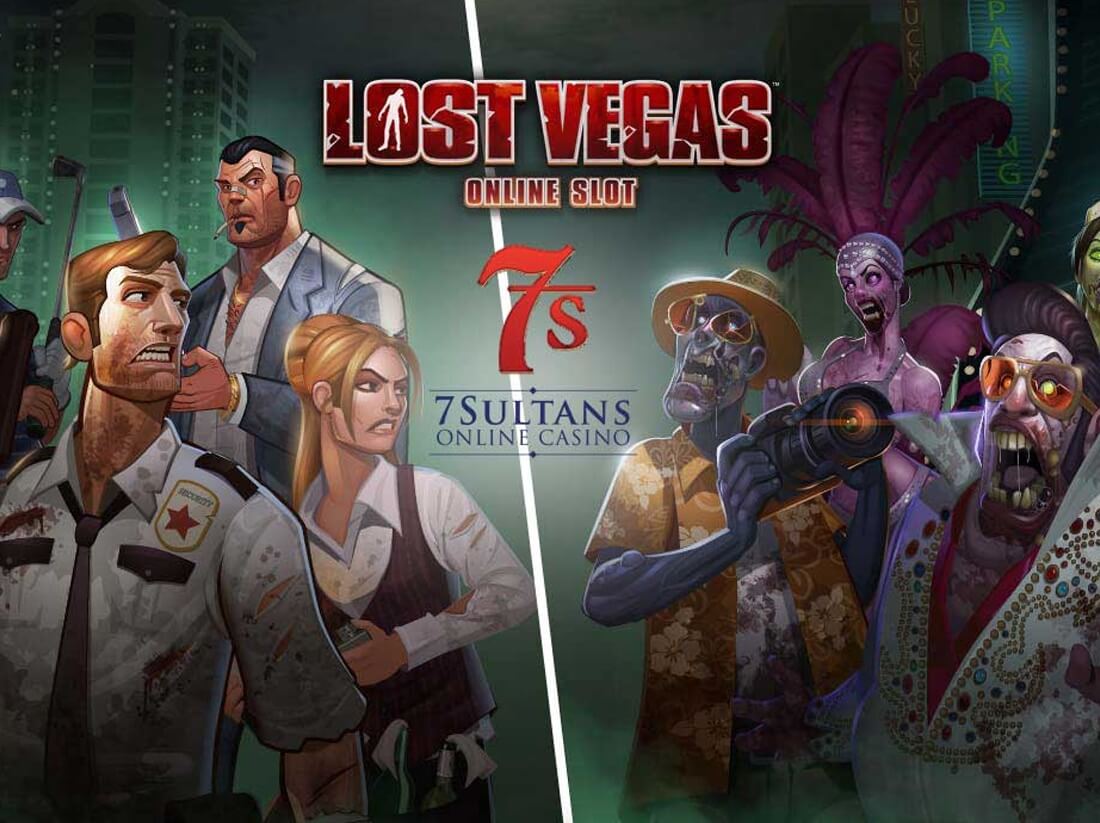 This fun slot from Microgaming offers players 243 ways to win. Set in a Las Vegas casino, the action picks up after this gambler's paradise has fallen foul to a zombie invasion.

The game gives players the option of playing as survivors or as zombies. There are two cool free spins features, plus the chance to place a low entry wager of 30p, all the way up to £45 a spin.

In this Lost Vegas slot review we'll show you the difference between playing in zombie and survivor mode. You can also get key Lost Vegas playing tips to help you take on the reels for real money. Read on to:

Decide whether to play as survivors or flesh eating zombies.

The Lost Vegas online slot is set in a post apocalyptic version of this famous casino mecca. The gamblers have long since bolted, and zombies roam freely looking for human flesh. What's interesting about this game is you can play it from two perspectives - zombie or survivor.

Both modes feature their own unique free spins features, and the reel symbols and background art will differ depending on the theme you select. Go the zombie route and you'll see living dead style characters including Vegas showgirls and a Zombie Elvis. Opt for survivor mode and you'll see characters brandishing weapons in a bid to stay alive.

Take a look at each of the Lost Vegas slot's different modes for free in our demo game, or try them out for real stakes at our top rated casinos online.

In either mode it's the character symbols that payout the highest

No matter if you play Lost Vegas slot in Survivor or Zombie mode the reels each feature 5 unique characters related to the theme, together with 5 lower paying playing card symbols. At any rate, it's landing 3 or more of a matching character across a winning payline that will earn you the biggest payoffs.

The same base game bonuses apply, whether you’re a zombie or a survivor

There's no shortage of cool features to take advantage of in the Lost Vegas online slot. The best part? Two of the top bonuses are playable in either mode. These are the Zombie Fist of Cash and the Blackout Bonus, both of which trigger entirely at random, but only after a non-win.

In Zombie Fist of Cash a zombie's fist will randomly appear - earning you a lump cash sum. In the Blackout Bonus the game will revert into night vision, when the highest value symbols on the reels offer up a random cash payout. If you happen to have a scatter on the reels when this feature triggers, you'll also automatically unlock one of the slot's 2 free spin features.

Playing as a survivor gives you the opportunity to remove low paying symbols from the reels when the free spin feature triggers. You can unlock free spins by landing 3 or more Hazard scatters anywhere on the reels. As soon as the feature triggers you'll be handed a cash prize, although this gets set-aside until the free spins feature ends.

With each spin that occurs you'll get the usual shot at making winning matches across an active payline. The amounts you earn will also be stashed until the feature finishes, at which point you'll be awarded your total free spins winnings in one lump payout.

If you're playing the Lost Vegas slot machine as a zombie you can trigger the free spins feature in just the same way (landing 3 hazards on the reels). In Zombie mode however free spins are accompanied by an Infection Feature that can result in stacked zombie wilds taking over the reels.

Free spins in zombie mode only finish when all 5 reels are 'infected' or you've reached 50 free spins. So either way, playing as a zombie in Lost Vegas slot opens up some great win potential. In fact, it's even possible to earn over 2,000x your stake (per spin) when playing in this mode.

With 2000x your stake available in zombie mode, if big returns are what you're seeking look no further. Lost Vegas slot's 243-ways to win are incentive enough to play here. Add to that those 4 great bonus features, and it just seems as though the cash can't stack up quick enough.

We also love being able to switch between the two different playing styles (which incidentally you can do at any point during the game). So there's plenty to keep players entertained and engaged with the Lost Vegas online slot, not to mention the thrill of seeing some potential big payouts land in your bankroll.