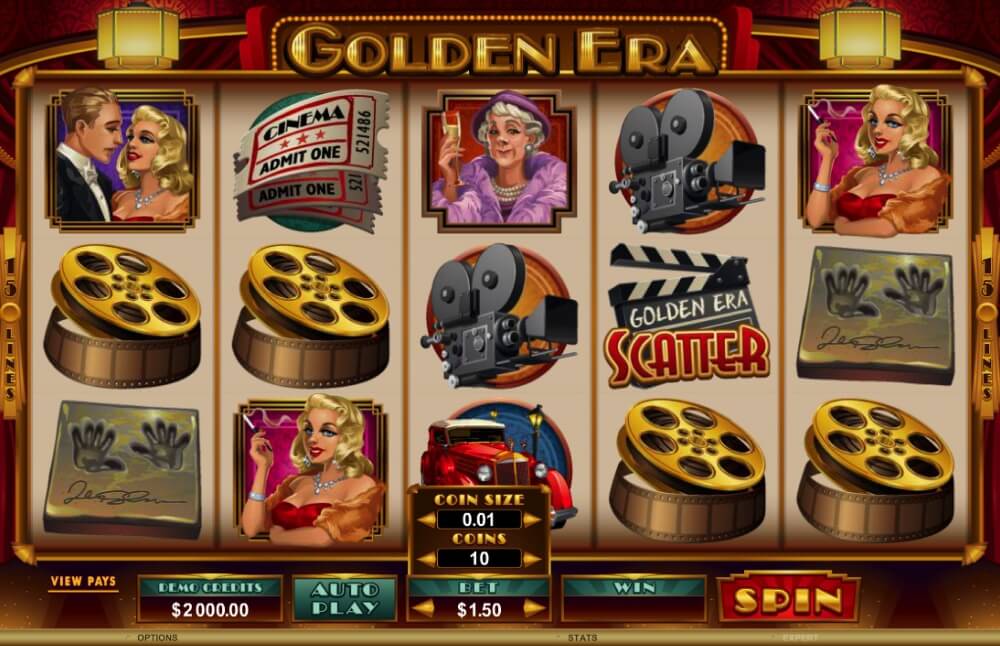 Golden Era is a Hollywood-themed slot by Microgaming, designed to take players back to the 1940s. The vintage style slot has five reels, and there are 15 paylines for players to choose from. With its wide range of bonus features and randomly-awarded cash prizes, there’s great potential to win real money here.

Golden Era is atmospheric and immersive, with a strong design and a brilliant collection of theme-specific symbols. It’s fast-paced, exciting and great fun to play, whether you opt for the free or real money version. Play on mobile or desktop and see what happens when you take a trip back in time to the Golden era of Tinseltown.

Pick me round with cash prizes

Go back in time with this game

How To Play Golden Era

Golden Era is a five reel game with three rows and 15 paylines. It’s not a difficult game to master, so it suits beginners as well as more experienced players. To begin, players simply need to choose their bet and activate their preferred paylines.

The more you activate, the greater your chances of winning. Once paylines have been chosen and a bet has been entered, it’s just a case of hitting that spin button to start. Once the reels stop, the game will let you know whether you’ve been lucky, and whether any special bonus features might have been triggered.

This game is fully themed, and set against the backdrop of a stage, ready for the day’s big performance. There are luxurious red velvet curtains with gilded accents, and the screen is topped with glittering gold lettering in an art deco font.

On the reels, you’ll find all kinds of themed symbols to take you back to Hollywood’s heyday. There are actors and actresses, cinema tickets, champagne toasts, awards, photographers, luxurious cards and much more. The game’s scatter is a vintage clapperboard, and the wild is the slot’s art deco logo.

Golden Era has a few different bonus features, all of which are in keeping with the slot’s vintage Hollywood feel. The bonuses are activated via the clapperboard scatter; players simply need to land three or more at any one time to start the bonus fun.

If three or more scatters are landed, players get a choice between two bonuses. The options are a free spins game or a pick me style round with cash prizes and multipliers. The free spins option is fairly generous, offering 12 free spins with two completely wild reels. The pick me bonus also has the potential to reward some lucrative prizes. Players simply need to choose different cinema posters to reveal cash prizes. The round continues for as long as it takes players to land on the ‘pop’ logo, which ends the game. There’s also a hidden multiplier behind one of the posters. Find this and payouts from this round will be doubled.

Throughout the game, players can take advantage of wild symbols, which can be substituted for any other to help create winning combinations and trigger payouts. The game’s wild symbol is the Golden Era logo in gold art deco lettering, with two spotlights lighting up the words.

Golden Era is a mobile-friendly game which works well on Apple and Android devices. The game can be played on tablets as well as smartphones, and it’s possible to play via a mobile casino in just a few clicks. There’s no lengthy set up involved, and most casinos won’t require you to download an app to play. The slot’s bold symbol design and colourful graphics make it a great choice for mobile gaming, and it looks impressive on screens of all sizes.

Celebrate the Golden Age of Hollywood with this immersive Microgaming slot. The themed game is packed full of fun bonus features, and there are so many ways to boost your payouts. We’re huge fans of the two bonus rounds, allowing players to choose either a pick me game or a free spins round. The mobile version is notable too, offering a high-quality experience no matter which device you play on. Spin the reels and see what prizes Tinseltown could have in store for you.