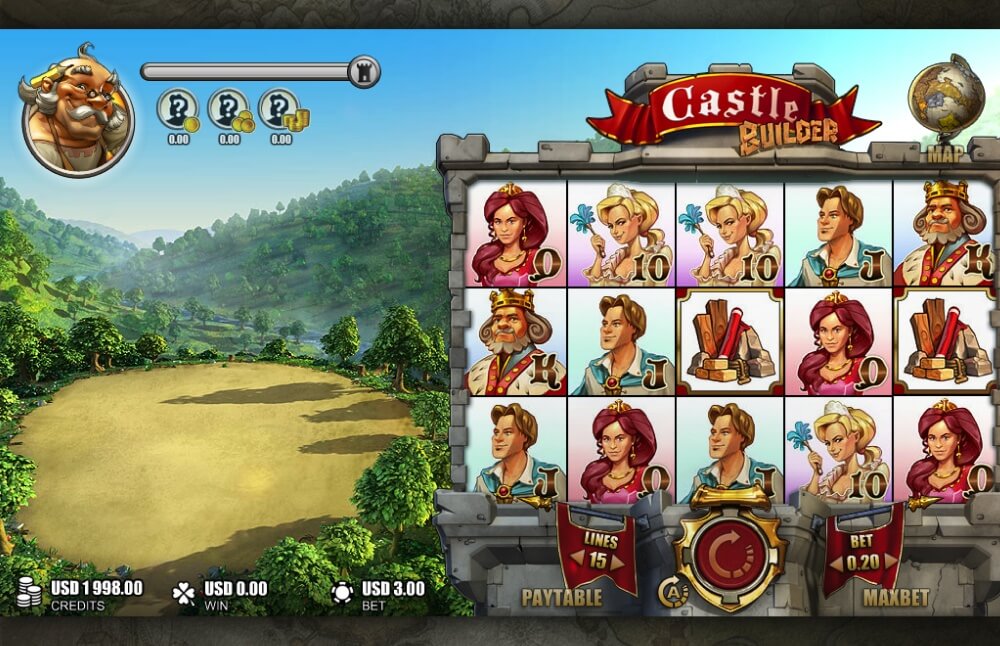 First released in 2014, Castle Builder is a fun themed game by the team at Rabcat Gaming. There are five reels in the game, and 15 paylines to choose from.

As the name suggests, castles play a prominent role in this game. There’s an atmospheric fantasy aspect to this slot, which takes inspiration from fairytales and folklore.

The backdrop and symbols have been designed in accordance with the castle theme. Gameplay is fast-paced and entertaining, and the bonus features are hugely important in adding to the thrill of the game. The castle construction bonus round has the potential to pay out big prizes, with the chances of winning increasing as the game goes on.

Play Castle Builder for free or try the real money version to unlock some huge cash prizes. There’s a 20,000x jackpot up for grabs, and plenty of other fun cash prizes to be discovered.

Play on a smartphone or mobile device

Themed sounds add to the fun

How to play Castle Builder

Castle Builder is a five-reel game, with 15 different paylines available. The game follows a standard slot machine gameplay style, but players need to choose which paylines to play before they spin.

Setting up the game is simple. It’s just a case of selecting the title, and then waiting for the game to appear on screen. Once it’s ready, you just need to choose your paylines and decide how much to bet per spin. The more paylines you play, the greater your chances of winning. However, spinning with more paylines active will cost more, so there’s a larger sum of money at risk when the reels are spun.

This game has hugely impressive graphics, and the theming is up there with some of the best fantasy-inspired games available. The castle inspiration has been taken seriously, and the game is set against a stunning scene of a fairytale castle set against a mountain scene, with bright blue skies and luscious green lawns.

The symbols are all fully themed, and include icons like gold and red treasure chests, vast wooden castle gates and bags stuffed full of treasure and money. There are also the typical lower paying playing card symbols in this game, but each one is symbolised with a fairytale character, with Kings, Queens, Princes and Princesses. There’s a wild symbol too; it’s depicted as a grey-haired King emblazoned with the word ‘wild’ in golden lettering.

There’s a strong narrative running through this game, which is brilliantly in keeping with its fairytale, story book theming. The bonus round is a great example of how much consideration has been given to theming in this game. Known as the castle construction round, it’s a mini bonus game where players can help to build a castle over time.

Every time building materials appear on an active payline, players will start to add blocks to the castle that’s under construction. As the castle begins to take shape, the chances of activating a lucrative bonus round improve. Once the castle is finished, players will see the King’s daughter appear, along with some potential suitors. It’s then just a case of choosing a suitor for the Princess, to reveal a cash prize.

If the castle is constructed successfully and a Prince or Princess is married off, the castle will disappear and construction will begin on a new castle. So, players can win the castle construction cash prizes multiple times as the game goes on. The game will keep note of all castles constructed and marriages arranged, and players can check on these by pressing the map button at any time during gameplay.

Castle Builder is a very detailed and intricate game. There’s a lot going on besides the spinning of the reels. This might make the game seem overly complex, but it actually works surprisingly well, and really adds to the overall experience of the game when playing on mobile.

Castle Builder’s bonus features have all been included on the mobile version, so players get the full experience of this Radcat Gaming slot no matter which device they choose to play on. Castle Builder works on all kinds of devices, from Apple to Android. It’s perfect for smartphones, but it also looks great on tablets, which benefit from a slightly larger screen size.

Castle Builder is an engaging and compelling game with a strong theme and plenty of bonus features. This action-packed online slot machine has been inspired by the magic of fairy tales, and it really does bring the spirit of some of our best-loved stories to life. The slot has five reels and 15 paylines, but it’s the bonus game that really makes this game. Collect building materials to slowly but steadily construct the castles, and arrange marriages for the King’s children to win big cash prizes. This game is perfect for mobile and desktop players, and it’s always hugely entertaining to play.