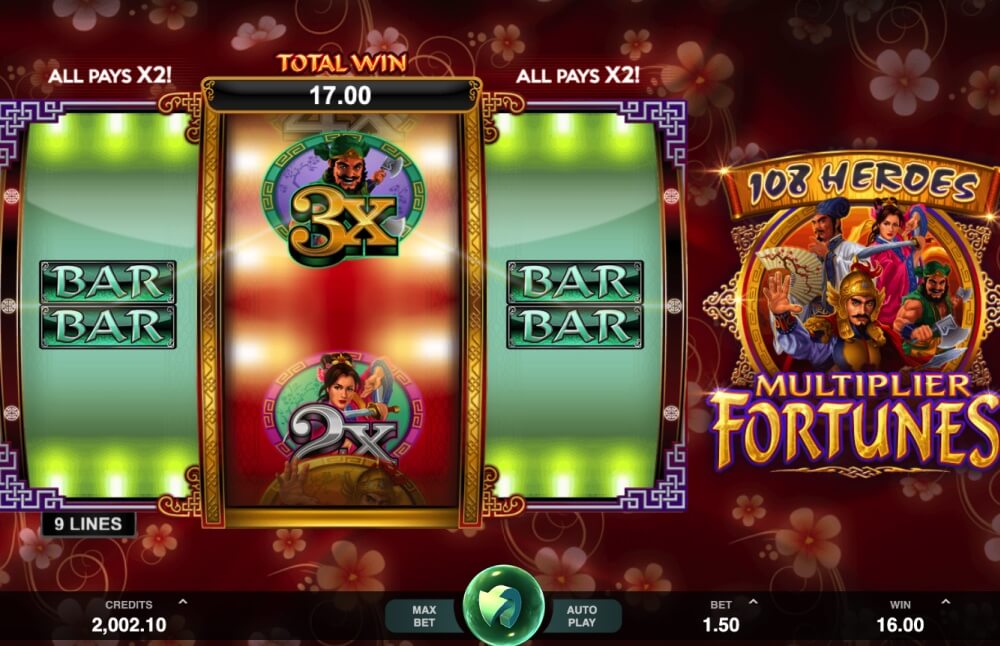 For a sequel to the 108 Heroes slot, Microgaming takes us back to the East. This exciting game has lots in common with old-school fruit machines. With wild multipliers and re-spins, don’t underestimate the potential winnings.

Our 108 Heroes Multiplier Fortunes slot review covers everything players need to know. From why the game’s minimal paylines aren’t as restricting as they seem, to how it makes up for having no bonus round. Specifically, we’ll look at:

Single icons multiply by up to 5x

A small amount which the game makes up for

Particularly large for a 3-reel game

All of which include a 2x win multiplier

How to Play 108 Heroes Multiplier Fortunes

Released in 2017, the style of Microgaming’s 108 Heroes Multiplier Fortunes slot feels like a bit of throwback. Despite this, it mixes things up in a way that works for players in 2023. Graphics of the game’s characters sit alongside stylized number imagery and BAR symbols. With most of the graphics being borrowed from the original 108 Heroes Slot, the result is not particularly flashy but looks great.

Online slot games don’t come much simpler than 108 Heroes Multiplier Fortunes. With only three reels and nine paylines, even newbies should have no problem getting started. Everything will feel very familiar to classic fruit machine fans in particular.

Just click on ‘Bet’ to adjust your coin size and the number of coins you want to play with. You can make a total bet of anything between $0.15 and $150 per spin. As soon as you hit ‘Spin’, you’ll become familiar with the re-spin feature, which requires no extra player input.

Unfortunately, Microgaming’s 108 Heroes Multiplier Fortunes has no bonus rounds. There’s no dedicated feature, free spins or otherwise, to be found. It does however have certain features that we could consider to be bonuses.

When two or more Wild Multipliers appear, a re-spin is triggered. Reel two is locked, which is ideal if that’s where a multiplier lies. Then reels one and three spin again. In this instance, wins are also doubled. Although this feature offers impressive payouts, the lack of a formal bonus round may be off-putting to some players.

On the other hand, the $10,000 jackpot might take the sting out of the missing bonus! In 3-reel games, with the exception of Mega Joker, such large jackpots are rare. In this respect, 108 Heroes Multiplier Fortunes can even compete with big-name 5-reel slots in 2023.

108 Heroes Multiplier Fortunes has large icons and simple reel animations. This game may well have been designed with mobile slot gaming in mind. Players only need a few buttons – Max Bet, Spin, Auto Play and Bet adjustment. This simplicity means the interface is visible even on small smartphone or tablet screens.

The absence of a bonus round is potentially good news for 108 Heroes Multiplier Fortunes mobile players — it makes it very easy for you to dip in and out of gameplay. Without a bonus round to chase, you don’t feel pressured to play on until you reach a set of free spins. Instead, big wins can drop at any time during standard play. This is an attractive feature for gamblers planning a quick session on their iPhone or Android device.

This title’s Multiplying Wilds and solid maximum payouts make for a fun playing experience. Make no mistake though, 108 Heroes Multiplier Fortunes slot won’t impress everyone. For many, it will feel too far from a typical slot game structure. Players in 2023 have come to expect a 5x3 video slot with a bonus round of 10-15 free spins. Beginners to slots, or advanced players willing to look past this, should really enjoy the gameplay.

As you’ve read in our 108 Heroes Multiplier Fortunes review, there’s excellent win potential here. Despite its appearance, there is a lot more going on than in a standard 3-reel fruit machine. Give it a try before you count it out!