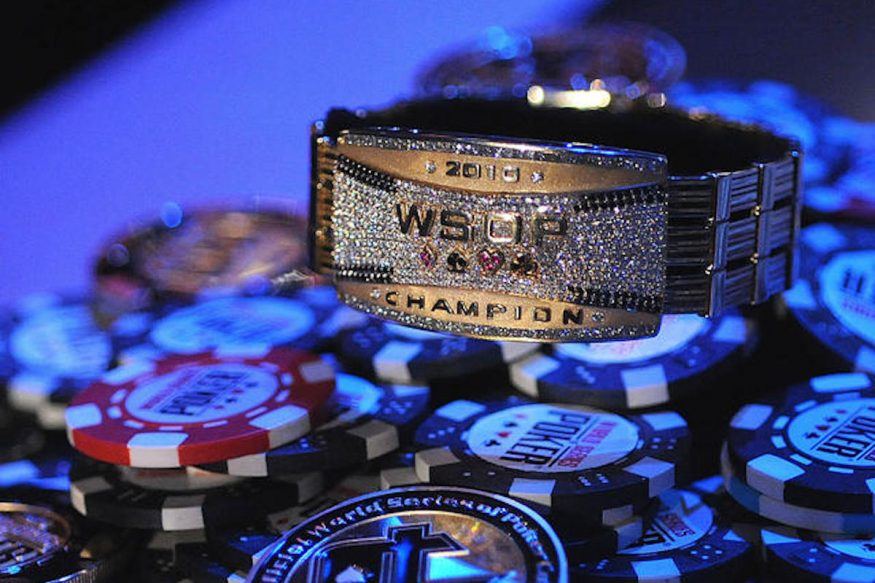 Some players love to get their hands on rare and expensive pieces of poker merchandise that you won’t find in your local casino shop. Bracelets and tournament trophies, rare editions of signed poker books, and custom-made chips are just a few examples.

Of course, this isn’t everyone’s cup of tea, and the value of these items is more individual than anything else, but the same applies to any type of sports memorabilia.

Whether you want to think about poker as a sport or not is a personal matter, but many fans definitely see it that way.

Some people collect baseball cards, and others spend inordinate amounts of time and money to get original jerseys from best-performing athletes.

So, why not poker?

After all, poker is hugely popular worldwide and some of the best players out there have definitely achieved legendary status, even outside of the fan base.

If you love poker and have some extra money burning a hole in your pocket, this article will tell you all about poker merchandise available for ultimate fans.

Some of these items are quite expensive, but they’ll bring a smile to your face and likely make your poker playing buddies jealous next time you’re hosting a home game.

There is hardly even a semi-hardcore poker fan that hasn’t dreamt of having one of these bad boys in their collection.

Although dozens of bracelets are given out every year to WSOP event winners, it is not an easy trophy, with tens of thousands of players competing for them.

Getting your hands on one in a traditional way is quite hard even if you have the means to travel to Las Vegas and play in a bunch of WSOP tournaments every year.

So why not consider buying one for yourself?

It’s by far not the same as winning it, but having a WSOP bracelet on display in your room is pretty cool either way – especially if you can get your hands on one of the rare ones, such as those given out to Main Event or $50,000 Players Championship winners.

Opportunities to even try to get one of these are very rare as players who win them are usually reluctant to let go of it for obvious reasons.

However, a couple of WSOP Main Event bracelets did find their way to the open market.

Peter Eastgate, the 2008 winner, decided to auction his Main Event bracelet for charity.

William Haughey could be described as the ultimate poker fan as he bought the bracelet because he wanted to protect its integrity and was willing to give it back to the WSOP so it could be placed in the Hall of Fame.

Another Main Event bracelet that was made available online was the one belonging to Jamie Gold, the 2006 winner.

The sale happened in 2013, but the final offer was just $62,725, a lot less than what Eastgate was able to raise with his bracelet.

Interestingly enough, Gold claimed that he had nothing to do with the auction and that he’d never sell the bracelet if he had any say in the matter.

Although the whole truth about this was never revealed, the site hosting the auction did confirm that Jamie wasn’t the one selling the bracelet but rather a different person who wanted to remain anonymous.

Regular WSOP bracelets, i.e., the ones awarded in smaller events, can often be bought for a few thousand, and people are willing to pay the price for this kind of poker memorabilia.

If you’re looking to buy yourself a bracelet, check auction sites for sports memorabilia and you’re bound to come across one of them eventually.

As mentioned, some players have become quite the celebrities even outside poker circles. There is hardly anyone who doesn’t know who Daniel Negreanu, Phil Ivey, or Patrik Antonius are.

So, poker fans around the world are very excited about the prospect of having a signed photograph of one of these players, preferably in their natural habitat, surrounded by chips and cards.

Hunting down big-name players and getting them to sign a book or a photo for you can be quite tedious.

Even if you’re lucky enough to meet your idol when visiting Vegas, they won’t jump from their game to sign something for you.

That’s why these items can be quite valuable, provided you can find someone willing to sell them.

A photo signed by Phil Ivey, for example, can easily go for a few hundred bucks. There are more than enough fans out there willing to pay the price for having something like this in their collection.

Real poker enthusiasts are also willing to pay a solid buck for poker books signed by their authors.

For example, if you have a copy of the famous Super System signed by one and only Doyle Brunson, you’ll have no problems selling it for a few hundred as well. If you’re looking to buy, that’s probably the price you’ll have to pay, unless you get really lucky.

Some buyers even prefer books that have been used (but are in good condition, of course) as it adds to the charm. In some ways, that makes them even more valuable.

And, if there is even a special message alongside the autograph, even better!

Although not the most expensive poker memorabilia out there, they’re definitely in high demand with fans.

You can find quite a few of them on sites like eBay and while bidding wars usually aren’t that fast and furious, you need to be ready to put in some fighting for really rare and valuable items.

When you think about a quality set of poker chips, you probably think about something worth a few hundred bucks.

And, in all honesty, for something like $500, you can get a set of poker chips that look and feel amazing and will take your home game to a whole new level.

But that’s not the kind of luxury I’m talking about.

For ultimate poker fans with a lot of extra money to spare, there are chip sets worth tens and even hundreds of thousands.

How would you feel about playing with chips made out of silver or even gold with nice precious stones like sapphires and rubies added on top?

There are companies out there that’ll make a custom chip set to your desires using the materials described above.

If you have the means for it, it goes without saying that your friends will be more than impressed.

I’m not sure that it would make sense to use these chips for any normal game, though, as a single chip could easily be worth more than the entire buy-in, and you’d have to be extra careful to make sure your guests don’t pocket a few of them for “sentimental” reasons.

These are the kind of chips you won’t find even in the best casinos and poker rooms, so it’s definitely something special.

Unfortunately, I can’t tell you anything about how they feel in your hand or how good they are for chip tricks as I’ve never had the pleasure to hold even one of them in my hand.

As much as I do love poker, I’m not sure I’d be comfortable dishing out a few hundred thousand on something like this even if I could afford it. But if it floats your boat, go for it!

Getting your hands on limited edition poker chips doesn’t always have to be super expensive, but it often entails a lot of effort.

First, you need to find out about a limited edition series you don’t have, then figure out where you can buy it, and finally, find the way to buy it if it’s not available online or it can’t be shipped to you.

It takes a whole lot of effort.

Because of this, collecting limited-edition chips is a hobby that only appeals to ultimate poker fans. True fans of the game and real collectors know that working hard to get them is half the fun.

You can find all sorts of limited series out there, featuring famous brands (like Harley-Davidson), motifs from popular TV shows, country or region-specific engravings – the list goes on.

Although individual chips may not be very expensive, costs can easily add up over time as there is always another collection for you to get your hands on.

Plus, you’ll always come across something you like that isn’t available. So, you’ll have to look for someone who has what you want and then convince them to sell it to you at a reasonable price.

And, as a warning: the price won’t always be reasonable.

These chips are usually a great conversation starter if you have lots of poker buddies and your collection will certainly pique their curiosity.

That said, don’t expect others to share the same level of enthusiasm you have for the hobby as they can’t fully understand the whole process and the pleasure that comes from finally getting the final piece you needed to complete a particular collection.

Something Only An Ultimate Fan Would Understand?

If you’re what you’d call an ultimate poker fan then you probably understand the appeal of things listed in this article.

Not everyone will have the same appreciation for a signed copy of Brunson’s Super System, but someone who knows a lot about the history of the game and things that shaped poker over the decades will see it differently than someone who just loves to play every now and then.

Admittedly, some of the things mentioned in this article are a bit ridiculous and I don’t see many of you reading this thinking you’ll go and buy some golden chips for a cool million.

Either way, if you love poker and wanted to treat yourself to something nice, you should find some good ideas inside.

Or, if you have a poker-playing friend who just never stops talking about it, you should have some idea about what to buy them for their next birthday.

A WSOP bracelet may be a bit too much, but a nice signed book or a photo will certainly make their day!