What Are the Odds Of You Regretting Your Next Tattoo?

Tattoos are enjoying a golden era, with an estimated 18.25% of the population aged 18 years and older admitting to having body art located on them. Unfortunately, while they may seem like a good idea at the time, for some people the love of tattoos doesn’t always last and they come to regret getting inked for life.

Dr Stephen Crabbe of the University of Portsmouth and researchers at Casino.org recently commissioned OnePoll to survey 1,000 UK residents who’d confessed to regretting their tattoos. We found out what tattoos they had, why they got them in the first place, and why they changed their mind about them. Are there common trends in the designs that people most regret, or their reasons for getting them? The British public have spoken, and here is what they had to say! 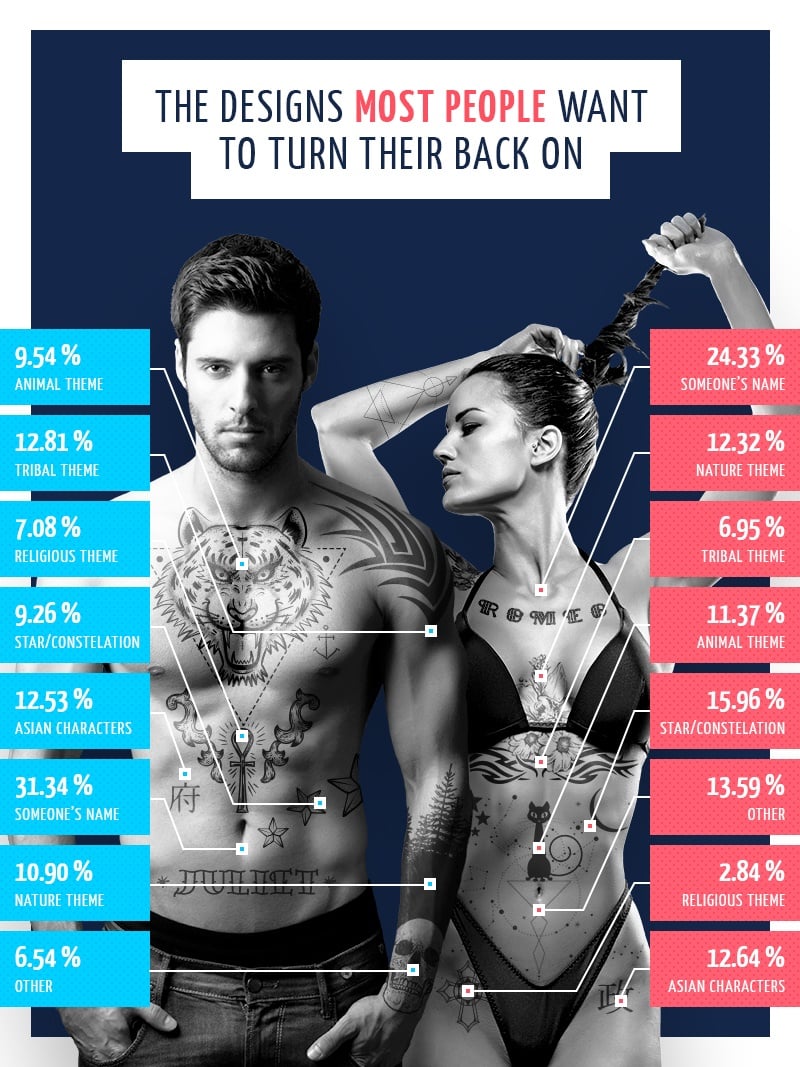 A Design for Life?

One of the most popular reasons people get a tattoo is to symbolise their love or affection for somebody. This can be either somebody the person is in a relationship with, somebody they admire, someone they are related to, or some person they wish to pay tribute towards.

It’s therefore no surprise that someone’s name is the design most men and women regret having as a tattoo. 31.34% of males regretted getting a person’s name inked on them. 24.33% of females was a lower percentage, but still the most common tattoo type they regret.

It’s clear from the stats that the name of your love interest is a risky tattoo choice. Relationships between people can change, and if a commitment to togetherness results in a tattoo then there’s immediate regret if the relationship breaks down. 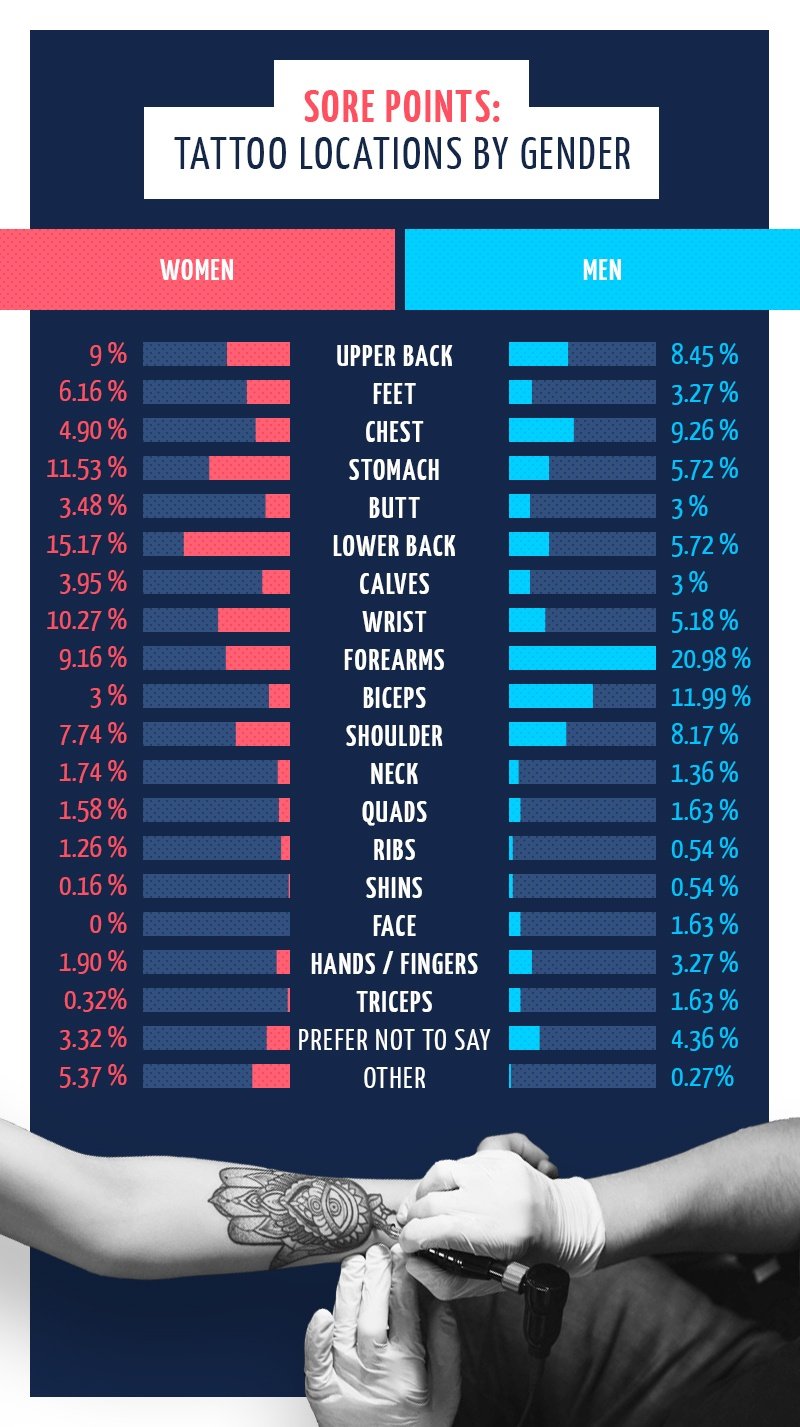 Battle of the Sexes: Tattoos by Gender

The part of the body where somebody gets a tattoo can make quite a statement. When David Beckham got a set of guardian angel wings tattooed on his neck in 2000 it became an instant fashion statement. The lower back tattoo that has since become labelled as the “tramp stamp” was made famous by celebrities such as Britney Spears and Cheryl Cole during the early 21st century.

The lower back has remained a popular choice for the location of a tattoo. In fact, 15.17% of women who regretted having a tattoo said theirs was positioned on their lower back. Out of the men surveyed, 20.98% had their tattoo of regret on their forearm.

Interestingly, both sexes seemed to hold equal regret over tattoos located on the shoulders, chest, and upper back. Tattoos that were inked on the face, shins, ribs, quads, and neck had almost no regret associated with them.

Moment of Madness? How Long People Planned Their Tattoos

Everybody has been in that situation where they’ve done something rash and in the spur of the moment. For some people it’s the first puff of a cigarette or sip of alcohol while underage, for others, it’s getting a tattoo.

The statistics don’t lie. It’s clear that those who regretted having a tattoo were more likely to have spent less time thinking about it. It can be argued that impulsive behaviour makes life more interesting. On the flip side, it can also get you tattoos you later cringe about having.

A staggering 21.96% of men and 21.25% of women admitted it took them “no time at all” to decide on the tattoo they now regret. On a wider scale, a total of 65.4% of males took a few days or less to decide, compared to 53.95% of females. Clearly, taking time to consider the pros and cons of a tattoo can reduce the risk of regret further down the line.

Are certain areas of the UK more spontaneous than others when it comes to getting tattoos? It turns out the Welsh lead the way for moments of madness, with 34% of those who regret their tattoos taking no time at all to choose their ink.

At the other end of the spectrum, the Northern Irish seem to be more sensible. Not a single respondent across the Irish Sea answered “no time at all” for their decision time. Those in the East Midlands and South East were the most calculating when it came to their tattoos. 7.14% in both regions took a few years before deciding to get their body art done. Nobody in Scotland, West Midlands, or Wales took that long! 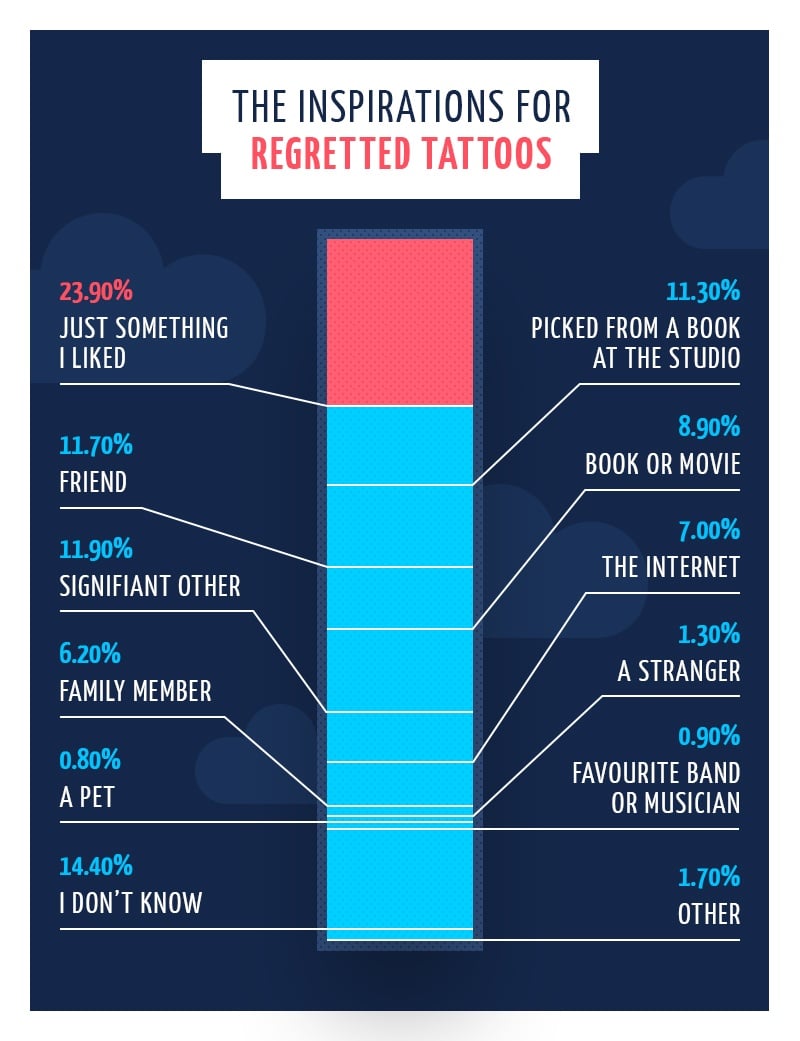 This is where things get juicy. What inspired people to get the tattoos they no longer wish to keep? What could’ve changed since they were inked to make them hate what they once loved?

You’d think breaking up with someone you’ve had tattooed on your arm would be the most likely cause of regret. Looking at the statistics, the survey suggests otherwise. Only 23.90% of people said this kind of tattoo was something they regretted.

11.90% said their tattoo regret was of a significant other, with 11.70% listing a friend and 11.30% claiming it was something they picked from a book at the tattoo parlour. Inspiration from a book or movie, the internet, family members, pets, and favourite bands were other reasons, but far less likely to be ones people regret. Creepily, 1.30% of those surveyed regretted getting a stranger tattooed on their body.

Whatever the reason a person has for getting a tattoo, there will also be something that makes them come to regret it later on. The reasons are surprisingly quite varied, and both women and men give a number of causes for regretting their ink.

28.44% of women simply got bored of their tattoos, with 23.85% stating that the colour had faded over the years. The actual artistry was the issue for 20.38%, who claimed the line work was poor. Perhaps most evocatively, 23.70% of women said the tattoo no longer held the same value to them as it once did.

The men surveyed showed a slightly more significant change of heart regards their tattoos, with 28.07% confirming that the tattoo no longer meant as much as it did for one reason or another. 24.52% believed that they just got bored of their tattoo.

A sad aspect of society found by the survey was that 15.64% of women felt judged by their tattoo, compared to just 9.54% of men. These findings come in an era of the #MeToo and #TimesUp movements, where evidence of sexism continued presence in society is a big concern. 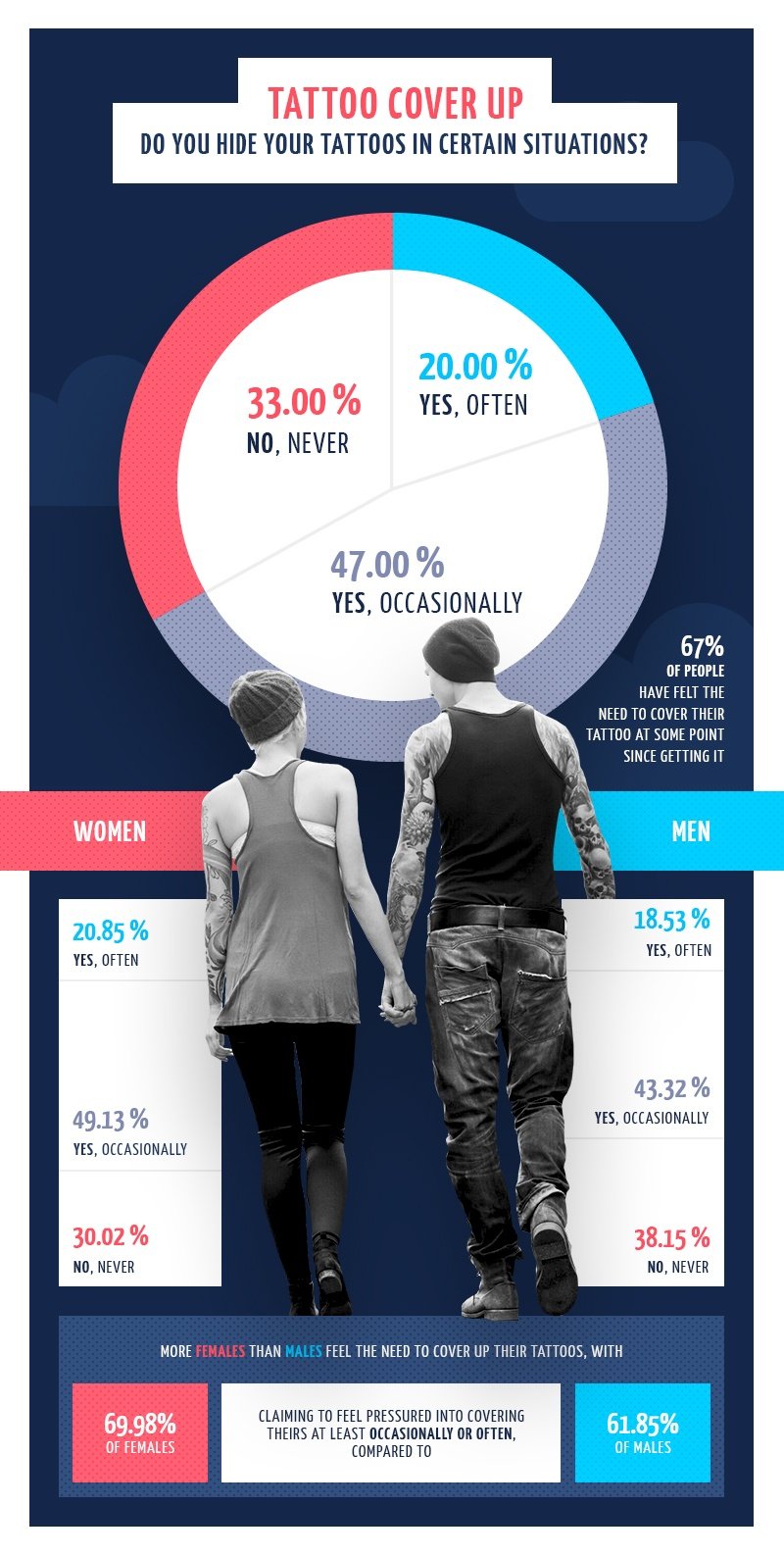 Tattoos have firmly moved into the mainstream of UK society. Rather than a sign of rebellion, tattoos are seen as a symbol of conformity. You’re strange if you haven’t got one, and you’re just the same as everyone else if you do have one. Perceptions of tattoos are changing, and for some this means covering up tattoos they were once proud to have on display.

A huge 67% of people that have regretted getting tattoos have felt the need to cover them up at some point. 8.16% more men than women have never covered up their tattoos, with women feeling more judged for having tattoos being one suggestion for these stats. Other people believe it can have a negative impact on their job prospects if they display their tattoos.

Tattoo removal is a hot topic at the moment. Somebody that has regretted having a tattoo could just get it removed. Not everybody finds this easy, though. The painful process, heal time, and cost are all things to consider, and can put people off the idea of removing ink.

When questioned about tattoo removal, those surveyed delivered varying responses. 29.50% said they had considered getting a tattoo removed but hadn’t yet gone through with it. 24.50% already had removed a tattoo. 28.30% answered that they would rather cover the tattoo up than have it removed. Just 17.70% admitted that they would leave the tattoo as it was and not cover it up.

It’s easy to understand why people aren’t sure about getting a tattoo removed. Despite people claiming it doesn’t hurt any more than getting a tattoo done, the pain factor is enough to put people off. The cost of £100 for the removal of a small tattoo also means it can hit the wallet hard.

The whole ordeal can be a prolonged process as well. It can take 6-8 weeks between laser treatments to remove a tattoo. There is no set schedule for how many treatments will be needed to erase the tattoo, either. The Kirkby-Desai scale is used to calculate this, but it’s worked out on a case-by-case basis. It’s often too much time for people to commit to having a tattoo removed.

That said, the process has become available to certain patients on the NHS. This has led to an increase in the number of people getting tattoos removed. It’s also a process that is becoming less taboo, and the scare-mongering surrounding the treatment is not as rife as it once was. 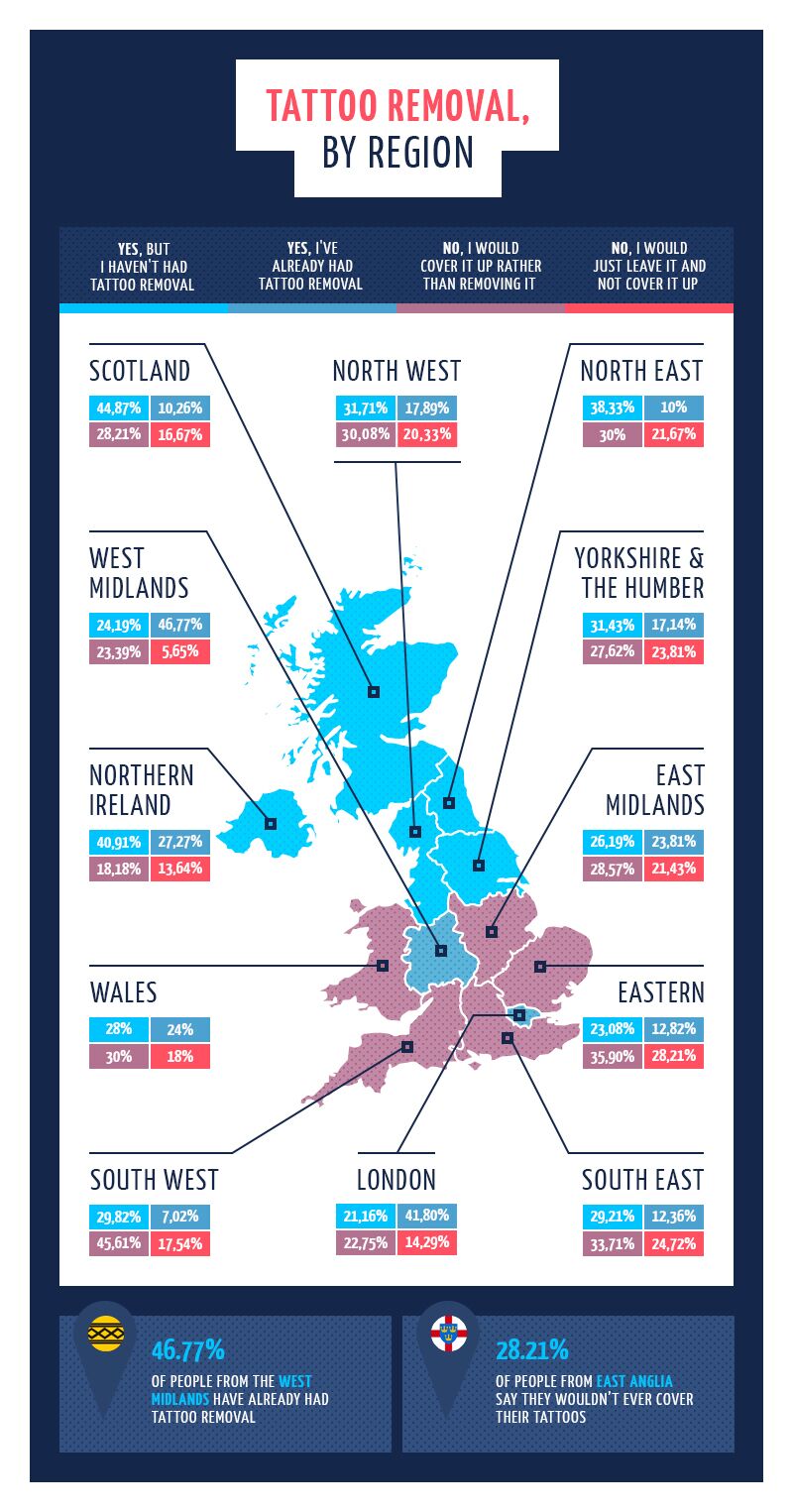 How do the figures stack up when we compare tattoo removals up and down the UK? Which regions have seen the most number of tattoo removals, and which prefer to just tolerate their unwanted body art?

Those living in the West Midlands lead the way for tattoo removal treatment. 46.77% of those surveyed replied by saying they had already had a tattoo removed. 28.21% of residents in the Eastern region claimed that they wouldn’t get a tattoo removed and wouldn’t even bother covering it up.

Where Were You When You Got Tattooed?

The time and place can have a huge bearing on the level of regret over getting a tattoo, according to the results of this survey. 55.45% of women and 50.68% of men claimed that they got the tattoo on just your average day. Nothing special about it.

This was not the case for everybody. 25% of Londoners, one quarter of residents in the capital city, got their tattoo of regret while on a stag or hen do. A whopping 40.91% of Northern Irelanders regretted getting their tattoos on honeymoon. They were obviously too intoxicated by love.

It’s also worth noting that men are three times more likely than women to get ink done on a night out. 12.81% of males responded by saying they regretted getting a tattoo after a session on the beers, compared to just 4.74% of women. There’s no pressure like peer pressure.

The results of this survey offer intriguing and shocking results. Stigmatisation surrounding tattoos can certainly be a huge contributing factor for women over men. Society appears to judge women more for tattoos, and thus puts them under more pressure to feel comfortable wearing their tattoos.

Many people just assume that a person was young, stupid, or not being true to themselves if they regret having a tattoo. This survey actually shows us a more complex picture. There are countless reasons why people get tattoos, but there are an equal number of reasons why they get them removed. Frequently, these reasons are not necessarily associated.

Despite living in a more tolerant society than ever before, where equal rights are correctly pushed across all groups, tattoos remain a subject that sees prejudice cast unfairly. This survey shows that, like the tattoos they wear, each person who regrets getting a tattoo each has their own story to tell.