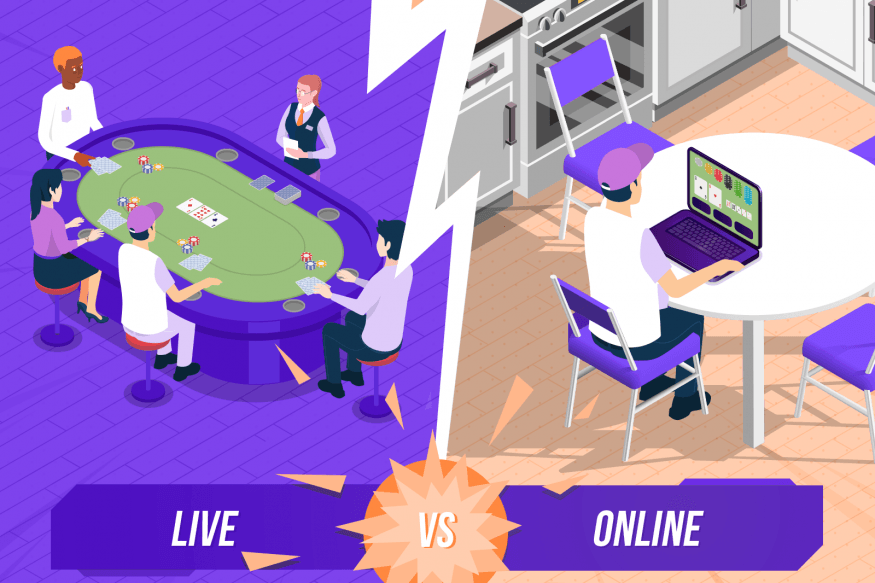 No-Limit Hold’em, as well as all other poker variations, is played according to the same set of rules both live and online.

Even though the same strategy principles apply to both, there are still some major differences that you should know.

While I wouldn’t go as far as saying it’s a completely different game, a live player trying his or her hand online (and vice versa) could be in for quite a surprise.

The goal of this article is to emphasize some of the biggest differences between live and online settings, which will potentially make the transition easier. It can help you adjust much faster and give your win-rate a significant boost.

1. Live Games Tend to Be Much Softer at Comparable Stakes

If you’ve played NL200 or higher stakes online, or heard the stories about it, you’re probably aware these games are tough.

Here you’ll find dedicated grinders who know the strategy and don’t make many mistakes. Beating online cash games at these stakes requires a lot of work of the tables.

Live games at the same or similar level, on the other hand, are a lot easier.

“If you’re beating NL200 online, you’ll probably have no problems playing as high as NL1,000 in your local casino.“

A decent NL10 online grinder will be a favorite in most NL200 live games. Even if it seems strange at first glance, there’s a perfectly good explanation for it.

Most casinos don’t spread anything below NL200 because it’s not financially feasible, so everyone who wants to play poker has to play these stakes or higher.

Online, you can play as low as NL5 if you simply want to have some fun, and many recreational players choose this option. Because of this, you won’t find many people just looking to blow off some steam in NL200 games online, while you can find plenty of such players in a live setting.

Of course, it works both ways.

A decent winner in their local 1/2 game sitting down at the same stakes online can be in for a rough ride.

You’ll probably need to brush up on your strategy and adopt some new skills before you can become profitable in these games, and you’ll likely need to use tracking software so that you’re not at a disadvantage.

Therefore, when transitioning from one setting to another, be sure to choose an appropriate stake.

2. Live Games Move at a Much Slower Pace

Online players are used to playing several tables at once and seeing hundreds of hands per hour.

With live games, you are limited to just one table, and the pace of that table will also be much slower than any online game you’ve ever played.

There are several reasons for this.

First of all, a live dealer takes some time to shuffle and deal cards, collect chips, distribute pots, etc.

Secondly, a lot of live players like to take their time and aren’t necessarily just focused on playing, especially at lower stakes. Many of them are there to have fun, laugh, and talk.

If you come from an online background, this can be quite annoying, but that is the reality of the game, and you can’t do much about it.

So it’s better to know this in advance and come prepared.

3. Reads Can Play an Important Role in Live Games

One of the biggest differences between live and online poker is the presence of physical reads in the former. While some people think poker tells are overrated, I tend to disagree.

I’m not saying that live reads are the most important part of poker strategy, but they can be quite significant in large pots. Many recreational players give away a lot of information about the strength of their hand, so if you put enough attention into it, you’ll be able to figure them out.

“Some people are so unaware of what they’re doing that they behave differently with a strong hand and when they are bluffing.“

Some slam chips when bluffing, while others only talk when holding a strong hand or do something else that gives away information.

Once you pick up on these certain tells, you can look to get involved in more pots against these players and increase your edge even more.

Whether it’s tournaments or cash games, be prepared for more multiway scenarios in live games.

Online, people will often fold their bad hands and move on to the next table.

However, live players are forced to sit at a single table and choose to get involved with a lot of speculative hands, just because they don’t want to be bored and keep folding.

Cold-calling 3-bets is not uncommon in lower stakes games. While you’ll rarely see these moves online, people will routinely do it in a live game, followed by several other players joining the action.

Since there is no way around it, you’ll need to handle these multiway pots and make necessary changes to your strategy.

“Even the best preflop hands shrink in value when you’re up against three or four other players, and a weak one-pair hand does not have much value postflop either.“

So, you’ll need to be patient and wait for really good spots to get your money in ahead and make some disciplined laydowns.

5. You Can Take More Liberties With Bet Sizes in Live Games

If you try opening for 5x in any decent online game, you can expect to get called only by the top of your opponent’s range. Contrary to this, live players don’t care as much about the sizing as they do about their hands.

What I mean is that if they like their hand, they will call your 3x, 5x, and sometimes even 10x open.

So, you should experiment with your preflop raises to figure out how much your opponents are ready to pay and then take advantage of that information.

You can also vary your postflop bet sizes.

It’s nice that you don’t have to worry about balancing all that much in live games.

Unless you’re playing against a particularly tough lineup, no one will see what you’re doing. And, if you’re up against tough opponents, get up and find an easier game; it shouldn’t be hard.

6. You Can Easily Take Advantage of Your Table Image in Live Games

When you’re playing online, you are just one of many other players for your opponent. As such, you’ll hardly get noticed unless you’re making some really big mistakes or giving a particular player a very hard time.

However, its completely different in live games.

People spend several hours sitting with the same players, so naturally, they see what you’re doing and try to figure out your strategy – sometimes even subconsciously.

Therefore, building your image for a single session or even for the long run if you’re playing against the same players can be quite beneficial.

For example, if live players tag you as a big bluffer, it’ll take a lot of convincing to change their minds.

No matter how often you turn the nuts on the river, those few big bluffs you ran will stick in their minds for a long time.

“While you should never reveal your hand when playing online, showing a big bluff in live games can pay you big dividends in the future.“

There are no set rules as to what you should or shouldn’t do when building your image.

The only important thing is to be aware of what people are likely to think about you and then take advantage of that perception by doing things they don’t expect.

7. You Can Have a Bigger Win Rate in Live Games But Have a Higher $/Hour Online

Although live games are much softer, it doesn’t mean that you will win more money by playing live instead of online.

While your win-rate in terms of BB/100 will likely go up quite significantly, you’ll play much fewer hands as well.

If you win at 2BB/100 online and play 600 hands an hour playing multiple tables, you’ll need to win at least 12BB an hour in the live setting to win the same amount.

This is achievable, of course, and you can win even more, but it’s important to keep in mind that the best measure of your win rate is how much money you win per hour, not the actual big blind count.

Although online players tend to complain about rake a lot, live games are much harsher in this regard.

It is especially true for lower stakes, where you’ll often have to accept the fact a decent percentage of every pot you win goes to the house.

Of course, some games are better than others, but you might not have that much choice, to begin with. It’s worth noting that some of the games have an uncapped rake, meaning they will take a fixed percentage from every single pot, no matter how big it is.

These are the games you should usually avoid unless you are up against extremely weak competition.

Also, you aren’t likely to get “normal” rake back in live games.

While some rooms do run promotions and leaderboards where you can get some of it back, this isn’t a standard feature, and that amount is likely to be very small.

That being said, we have to understand the casino’s perspective as well.

They have a fixed number of tables and can’t duplicate these spots like their online counterparts to increase the profits.

In the end, they still need to earn enough money to cover their costs, but players are the ones who end up paying the price through the rake.

If you play online poker, you can fire up your client and find some tables running pretty much whenever you feel like playing.

Day or night, there are usually some games, especially in larger rooms, with good traffic.

So, you have all the freedom in the world to set your own schedule, especially if you’re playing cash games.

This isn’t the case with live poker.

Most live casinos and poker rooms will spread games in the afternoon and during the night, with heavy traffic on the weekends.

“If you’re looking to find good live games, you’ll often have to play late into the night, and Fridays and Saturdays will pretty much be reserved for poker.”

So, if freedom and flexibility are important for you, online poker is probably a better option.

Live games can be a lot of fun if you enjoy the atmosphere, but you’ll need to adjust your schedule around them, not the other way around.

Live or Online Poker – It’s a Matter of Personal Preference

As you can see, there are quite a few differences between online and live poker.

Whichever you choose, it’s important to understand and accept these differences and weigh them up in advance.

If you don’t enjoy the presence of other people or don’t feel comfortable playing through nights, live poker may not be for you.

But if you have solid foundations and don’t mind a somewhat slower game pace, you should be able to maintain decent win-rates in most live games and have no problems gradually building your bankroll to move up in stakes.

Live games are just so much softer.

How The Ace Of Spades Became Known As The “Death Card”