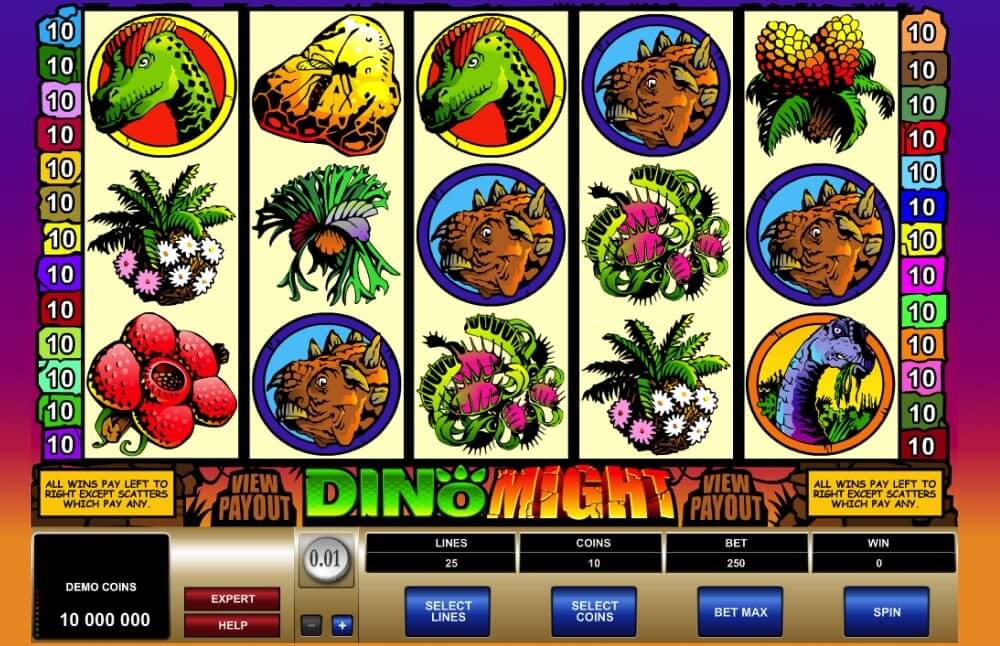 Dinosaur lovers, this one’s for you. Dino Might takes players back 20 million years to a prehistoric world filled with ferocious dinosaurs, tropical flowers, and carnivorous plants. The reels are bright and colorful, with an eye-popping jungle-theme and a soundtrack to match. Beyond a fun concept, the game has some solid gameplay that includes 25 customizable paylines and two unique bonus games. Read on for our full Dino Might slot review where we’ll be covering:

Choose from up to 25 active lines

Boost your winnings with plenty of multipliers

Fully compatible with most mobile devices

Top 5 reasons why we rated Dino Might: Very Good

Dino Might is a five reel and 25 payline slot which pays from left to right. The gameplay is fairly traditional – all players have to do is select how many paylines they want in play before choosing the number of coins they want per line. The maximum wager allowed is 250 coins per spin, with a 20,000 coin jackpot up for grabs. Once the selection has been made, all playershave to do is sit back and watch the reels spin!

Before playing for real money, it’s a good idea to have an understanding of the symbols that will be in-play. The highest paying symbol is the Dino Might logo which can pay out a massive 8,000 coins for five in a row on a selected line. The other high paying symbols are all different dinosaurs, while the lower paying symbols are all types of tropical plant. We were pleased to see that there were no card symbols here, instead the reels are filled entirely with themed symbols.

Despite being straightforward to play, Dino Might still has two great bonus rounds. The first is the Match Bonus which is triggered by players getting three or more ‘insect trapped in amber’ symbols on the reels. Here players will be presented with a puzzle-type game where they must scratch off and match four of the same symbols to win a prize of up to 20,000 coins. On top of this there’s a ‘mighty multiplier’ hidden symbol which will boost a player’s winnings! It can be quite a lucrative game, though once played it cannot be retriggered in a single session.

There’s also a Reel Bonus game which is triggered by landing three, four, or five Triggersaurus symbols anywhere on an active reel. Here players will select up to five dinosaurs which will flip over to reveal a prize amount. Whatever the sum of the prize is will be added to a player’s payline wins. Though Dino Might has no progressive jackpot, we think the two bonus games on offer have enough to help players achieve a decent payout.

We’re happy to say that Microgaming has fully optimized Dino Might for mobile gaming. When itcomes to our mobile reviews, we often find that the simplest games work best on mobile. Lots of buttons can be confusing on the small screen, and animations and effects don’t always translate. None of this is an issue for Dino Might, which plays smoothly and retains all of the same features as on desktop. We tested it out on different operating systems, including Android and iOS, and the game worked consistently across the board. There is no download required either – you can play directly from your phone’s browser.

If you’re looking for a boundary pushing design with video animations and special effects, Dino Might isn’t it. But if you prefer classic games with an analog feel, this could be the game for you. Players will enjoy the range of bonuses on offer mixed with generous multipliers and customizable paylines that keep things interesting. Though we would have liked to have seen progressive jackpot thrown into the mix, for an older slot, we were more than satisfied with the gameplay. Overall we’d happily recommended Dino Might – try it out for yourself today and see what you think.