Surrender In Blackjack: Everything You Need To Know To Take Advantage 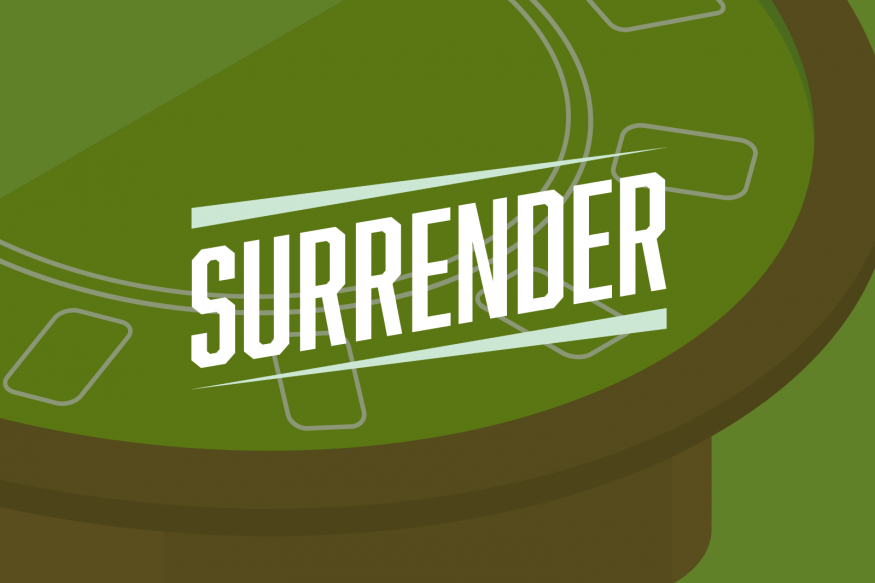 The proper use of either early or late surrender in blackjack can dramatically cut the house advantage over skilled players.

And while not as popular as it once was, surrender can be found in some land-based casinos, and on many online casinos and electronic table games.

What Is Surrender In Blackjack?

Surrender is simply an optional rule in blackjack that allows you to give up half your bet after you have seen your first two cards and the dealer up card.

If your hand has less than a 50 percent chance of winning against the dealer, then it’s time to consider surrender.

There are two types of surrender rules, referred to as either early or late surrender.

We will discuss both, though early surrender is increasingly difficult to find in its original form, where it hasn’t been diluted by other less advantageous rule changes.

Early surrender allows you the option to surrender half your bet before the dealer checks the hole card for blackjack. This has a tremendous effect on house advantage as players can give up half their bet on bad hands vs. a dealer’s ace up card.

Early surrender was a byproduct of some questionable decisions by the Casino Control Commission and early operators in Atlantic City, New Jersey, in the late 70s when casinos first became legal there.

Hoping liberal rules might lure players, and not wanting the dealers to peek at their hole card due to possible collusion, they came up with this new version of surrender.

With a .6 percent blow to the casino’s house edge, even basic strategy players had a slight advantage.

In fact, this rule change was so disastrous that in 1981 then New Jersey Governor Byrne had to step in and uphold the New Jersey Casino Control Commission’s decision to bypass the regular public hearing process, as they believed continuing the early surrender rule for the 60 days normally required for public comment posed an “imminent peril” for casino operators.

Such a potent rule variation is seldom seen today in land-based casinos.

If you find it online, it’s best to carefully check all the house rules as they are likely to have been tweaked to make up for the loss to the house edge.

If the dealer hits soft 17, you will also want to surrender hard 4.

Late surrender differs from early surrender in that you can only forfeit your hand and lose half your bet AFTER the dealer checks his hand for blackjack.

This dramatically reduces the effectiveness of the surrender option to something like .05 to .1 percent.

That doesn’t sound like much, but consider that on a 6 deck shoe with loose house rules, the edge drops from .42 percent to .35 percent or almost 20 percent overall when late surrender is used optimally.

So late surrender can be another tool to help us decrease house edge when it’s available.

While it should be an easy option to spot at online casinos or e-tables, in land-based casinos it is seldom displayed on table signage or elsewhere.

Your best bet may be to ask the dealer if the surrender option is available and if it’s late surrender or early.

If that wasn’t confusing enough, not all casinos use the same hand signals for surrender in blackjack.

Generally speaking, you should draw a horizontal line behind your bet with your index finger, while verbally announcing surrender.

This applies to blackjack games dealt out of a shoe.

In casinos with handheld games, procedures for surrender may differ, so when in doubt it’s best to ask your dealer the proper etiquette for surrendering your hand. They will be happy to walk you through it.

You will want to surrender any hands where you don’t have at least a 50 percent chance of winning against the dealer’s up card.

But this will be influenced by house rules such as hit or stand on soft 17 and by the number of decks in play.

Here is a quick summary of late surrender rules:

The rules of play outlined above are for what is called ‘total dependent’, meaning you are only interested in the totals of your first two cards in order to make a surrender decision.

There are rules for ‘composition dependent’ surrender, meaning for instance if you are dealt a 9, 6 vs an 8, 7. While both total 15, they are composed of different groupings of cards.

If you analyze this using composition dependent rules for the single deck game, you should surrender 9, 6 but play out an 8, 7.

There is more than a dozen such exceptions, and it can be quite confusing for those starting out with surrender options in blackjack.

The small advantage gained is probably not worth the added difficulty, and best left to more seasoned players.

So that’s a basic summary of early and late surrender and the basic rules for gaining the most edge in blackjack. When used properly, these will help you keep more of your money and stay in the game longer.