Blackjack Strategy: When To Split And When To Stand Pat 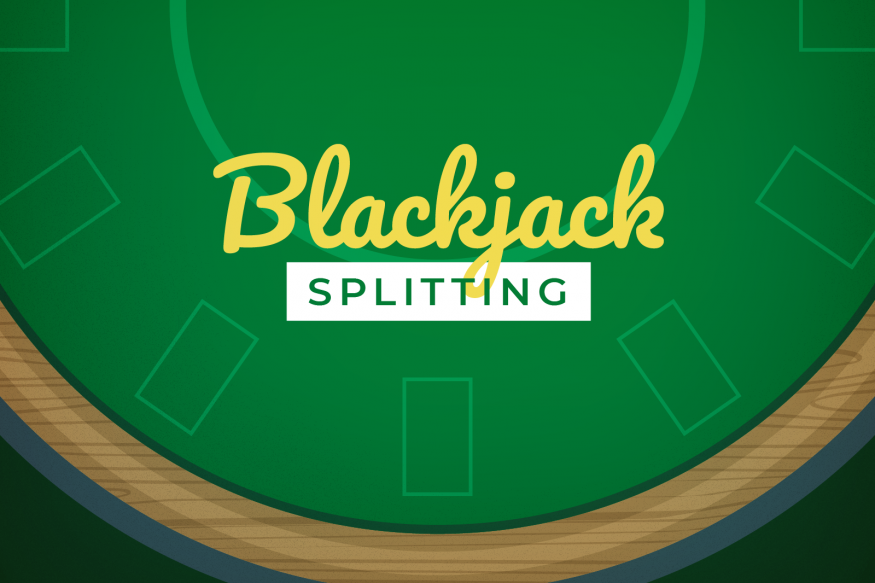 One of the most exciting aspects of blackjack is that we are sometimes presented with a chance to add to our original wager.

When we get the opportunity to double down or split, it is critical that we make the right decision.  We will have multiples of our usual bet riding on the outcome.

Sometimes with splits and double after splits, we may find that we have four or five times our average bet riding on one round of cards, so it’s important to know what you should do.

What Is Splitting In Blackjack?

When you have two of the same cards, like a pair of 4s or 8s, you are allowed to split the pair and play them like two separate hands.

When splitting, you can only split for the same amount as your original wager, unlike double downs, where you can bet less.

We will go into greater detail about the proper playing of each pair below but if you don’t wish to learn the entire basic strategy, the simplest way to play is:

Only players can split, never the dealer. You must have two of the same value cards. You must split for the same amount of money as your original wager.

To signal a split, you can point at your bet with two fingers, or simply push out an equal amount of chips to your first wager. The dealer will know your intentions.

Fortunately, the basic strategy for splits is simple and straightforward.

There are some house rules that we will discuss a little later that slightly alter our decisions, but for most blackjack games, you should follow these basic rules when dealt pairs.

Fun fact, in blackjack, all 10-value cards are splittable.

This means you don’t need to wait to be dealt a Jack and another Jack. You could, in theory, split your King and Queen, or your 10 and Jack.

You shouldn’t, but you could.

20 is a great hand. Yes, several more 20s might also be great, and if the dealer has a 5 or 6 up, perhaps you might be tempted to get more money on the layout.

But the math is clear. Stick with the bird in your hand, don’t go gunning for the one in the bush.

Should you decide to split your 10s, you may hear – over the groans of your fellow players – the dealer calling out “splitting 10s.”

This is because card counters know that a deck rich in 10s does mean that you should split 10s.

Dealers call this out to their floor people for management to determine if you are a complete novice or someone they need to watch closely.

Basic strategy says split 9s against any dealer upcard, except for 7s.

This is easily remembered by the fact that you don’t want to give up your 18 against a possible dealer 17.

Is it hard to split 9s against a dealer 10 or Ace?

Yes, but again, we have to trust the math.

Pair of Aces or 8s

These two pairs are often heard together, as we will always split Aces or 8s no matter what the dealer turns up.

It’s important to note that Aces are usually only allowed one card each, and a 10 card dealt to a split Ace is 21, not blackjack.

All other pairs can be split up to four hands.

If you have any of these pairs, you’ll want to split if the dealer has 2 through 7 for an upcard.

If you have either pair, you will want to split if the dealer has a 2 through 6 as an upcard.

With a total of 10, it is much better to double a pair of 5s than split. You should double this pair against 2 through 9; otherwise, just hit.

That’s the basic strategy for splitting pairs in four through eight decks, where you can double after split.

These rules should work on over 90% of the games you come across. Most of the other rules don’t change the strategy much.

Some casinos have tweaked the rules so that you aren’t allowed to double after splitting.

While this adds 14% to the house edge, it can cost them business. And because of that, it’s not a rule change that you see all that often.

Should you come across this rule, it might be best just to find another casino. But if it’s the only one around for 100 miles, then you will want to make a couple of changes on pair splitting.

With either of these pairs, you should now only split on 4 through 7. Just hit against a dealer’s 2 or 3.

If you can’t double after split with your pair of 4s, only split against 2 through 4.

Hit against a dealer’s 5 or higher.

With a pair of 6s, we will hit against a dealer’s 2 and split against 3 through 6, then hit again against any dealer’s up card higher than 6.

If you’re only playing against two decks and not against a shoe, you only have a couple of changes to strategy.

In that case, use the same rules as we just went over for no double after splits and forgetting about splitting 6s against a 7 or splitting 7s against a dealer’s 8.

While not a common rule, it can still be found in some places.

Just for the sake of completeness, we will cover the one slight basic strategy deviation when surrender is offered.

Regardless of the number of decks, and only in games where the dealer hits soft 17, you should surrender your pair of 8s against a dealer’s Ace.

This should cover all the likely blackjack rules you are likely to encounter.

Remember: Using this basic strategy for pair splitting is essential because it can help you get more money, often much more money, on the layout when the odds are in your favor.

So it’s best to stick with it whenever possible.

Make sure to double when you should on these hands to really supercharge your advantage.

Everything You Need To Know About Exchange Betting

6 Most Popular Betting Types Every Beginner Needs To Know