How To Beat The 21+3 Blackjack Side Bet 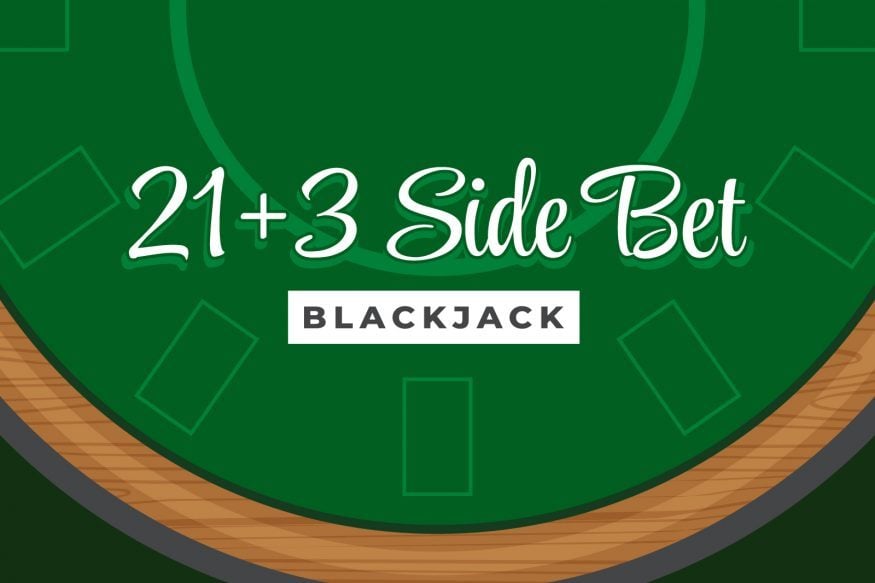 21+3 was first introduced in Las Vegas in 2001 and has grown to become one of the world’s most popular side bets in the past 20 years.

If you’ve ever wondered how to play or what to look for in a good 21+3 game, we’ve got you covered.

The dealer will deal you your first two cards and then turn over their upcard.

If your first two cards and the dealer’s top card make a straight, a flush, or a three of a kind, you’ve won!

One of the reasons for its popularity is that it’s so easy to play.

The bet is placed in a small circle off to the side of the main wager, which is why it’s called a side bet.

Either online or in a land-based casino, you should be able to find the bet for as low as $1, although in some places like Las Vegas, you may only see it for $5 and up.

In the original game – now owned by Galaxy Gaming and found on land-based blackjack tables worldwide – a straight, flush, or three of a kind was paid a simple 9 to 1.

But as online casinos flourished and other companies saw the potential, the pay tables evolved.

Some games now pay a progressive jackpot on things like three aces suited, or perhaps 270 to 1 for a three of a kind suited.

The critical thing to remember is that they all play basically the same. Your first two cards and the dealer’s top card need to combine to make a winning hand.

Several of the online providers offer different payouts depending on the hand dealt.

The most common of these is this payout table from IGT, which has a 4.14 percent house edge with a six-deck shoe.

Or the very similar payout from Evolution Gaming which has a 3.62 percent house edge with a six-deck shoe.

The very popular top three side bet often accompanies the 21+3 side bet since they are both owned by Galaxy and marketed together to casinos.

It requires that you bet both the 21+3 bet and the top three bet. Then if your two cards and the dealer’s up card are a three of a kind, you’re paid 90 to 1.

The house advantage on just the top three bet is approximately 9 percent.

The More Decks, The Merrier

The number of decks in play can influence the house advantage by a few tenths of a point on your blackjack hand.

But the house advantage on your 21+3 bet can change by several whole percentage points depending on the number of decks in play.

The original 21+3 offered up by Shufflemaster at casinos across Europe, America and Asia is a prime example.

Here’s the paytable from 1-8 decks:

The casino’s advantage is more than twice as much if you play the 21+3 side bet on the double-deck game vs. an eight-deck shoe.

Even on the IGT and Evolution payout tables discussed above, the difference between a six-deck shoe and an eight-deck shoe is almost a whole percentage point.

So this game is best played with every payout paying 9 to 1 and on an eight-deck shoe.

Failing that, look for as many decks as possible, with one of these pay tables preferably.

While a lower house edge is always a better bet, can the game be beaten?

Eliot Jacobson, a table games hacker of sorts, showed that a simple count of suits was enough to beat the game, albeit with a very low expected return and a high degree of difficulty.

But as many casinos went to progressive pay tables with three ace of spades or something similar, many individuals and teams realized they could look for progressive payouts that were large enough to give the player the advantage.

In these very limited cases, the mathematical pendulum had swung to favor the player as the size of the jackpot grew to offset the slight house advantage.

So it never hurts to keep an eye out for large progressive meters when scouting for a 21+3 table.

Conversely, small jackpots on these progressive games may mean that you are playing at a much worse house advantage than you would be just playing on a conventional game, so beware.

21+3 is a simple, fun side bet, which, if you’re careful, doesn’t have to have a huge house advantage.

It can add a lot of excitement for just a $1 or $5 bet, and it gets the whole table pulling together in a way that blackjack doesn’t always.

That’s the reason it’s been around for two decades and will probably be around for at least two more.