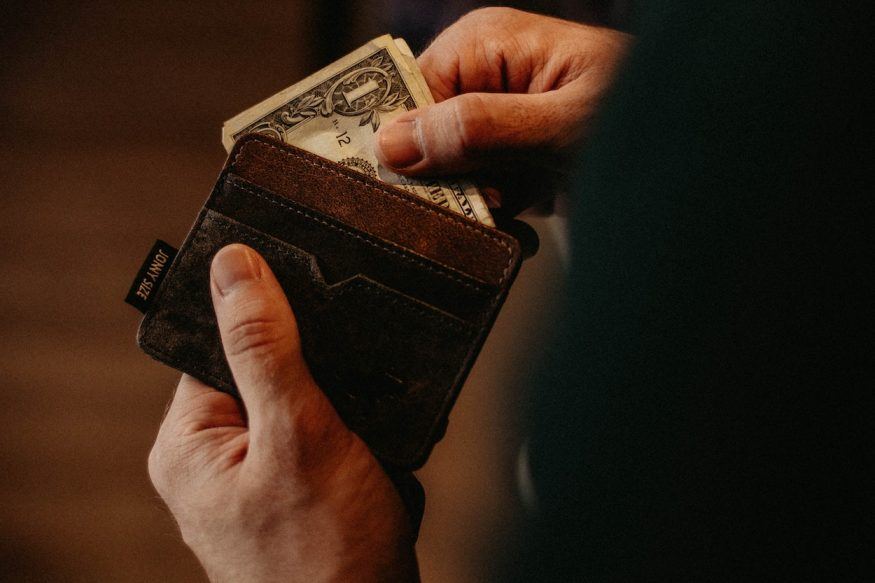 Con games evolve over time and can be adapted to new circumstances, cultural shifts or technology.

In this article, I’m going to show how an old “set-up” scam can be adapted, modernised and varied depending on the skill and audacity of the con artists.

This is at least a two-person con game, but I’ve heard of set-ups where everyone is in on it except the mark.

I’ve also heard of single-o (one person) set-ups played by scammers on large groups where the hustler actually gets some of the marks to back up his claim/story!

I’m going to describe two versions of the same scam to show how an outdated swindle can be polished off and re-worked by modern hustlers.

Originally known as “The Lucky Pocketbook”, this was a clever bit of chicanery used to separate drunks and gamblers from their money about a hundred years ago.

It’s a simple con game with a relatively easy method but it ensnares its victims by forcing them into the role of would-be con artists in a less than fair (or honest) bet.

It begins after a game of poker or an evening at the bar when one of the party says his farewells and leaves the group.

Soon, another player (or drinker) notices that he has left behind a small purse and tells the others he will soon be back when he realises it’s missing.

He tells everyone: “That’s his lucky charm, he never plays a hand of cards without that on the table. Inside is a penny from the year he was born.”

Sure enough, when someone checks, they find a penny from 1880 (or whenever) and much fun is had at the expense of their absent companion.

A few minutes later, the owner of the purse returns, slightly panicked but instantly relieved when he sees his lost property waiting for him.

Excusing himself to the group, he reclaims the purse but before he can leave again, one of the group asks what is so valuable inside the purse.

At this point, he sheepishly confesses that it’s nothing more than a lucky penny from 1880, the year he was born but the group aren’t satisfied and ask to see the coin.

Before he can open the purse, however, his secret partner stops him and sews the seeds of their impending con game.

“There were no pennies struck in 1880. I used to collect coins and I remember that was one of the years they never made any pennies due to the copper shortage. There’s no way that penny is from 1880.”

“Are you calling me a liar?” replies the purse owner, and the scene is set for the hook to be cast.

“All I’m saying is that you’re mistaken. In fact, I’ll bet a hundred dollars that that penny isn’t from 1880.”

A hundred-dollar bill hits the table and the group laughs, but the owner of the purse turns on them, brandishing his little purse.

This is where the two con artists manipulate the crowd by tempering their performance according to the reaction of their marks.

If no one bites quickly (though they almost always did) they might heat things up and start arguing, accusing and threatening until everyone throws down their money just to teach the purse-owner a lesson.

Once the bets are on the table, the indignant owner of the little leather purse tosses it to one of the marks to verify it contains a coin dated 1880.

Naturally the mark opening the purse is more than certain that the coin inside will have another date and when he reads “1880” on the coin, the sucker is utterly dumbstruck.

While the coin is passed around, the winner collects his cash, demands the return of his lucky penny and storms off, never to return.

Meanwhile, his partner plays the part of a good loser and cools-off the group.

If tempers flare, the remaining con artist might even accuse the person who replaced the original penny of not checking the coin he replaced it with!

This might not break the mark’s bank or make the con artists a fortune but it’s a simple enough ruse that once fleeced thousands of victims without too much harm or great loss, but the amount made was probably worthwhile.

In some cases, it might even have been used to set up the marks for a bigger con in the future.

Short cons like this are less common today but having pulled so many on The Real Hustle, I’m always astounded at how well they work once potential victims buy into the story they’re being told.

Think about the situation: a slightly drunk player who may have been winning all night (this might have been a lucrative “topper” for low-level card hustlers after skimming a game for hours) leaves behind the opportunity for the group to have some fun at his expense.

This then becomes an opportunity to teach him a lesson when the first bet is made.

All the purse owner has to do is switch the purse with the coin they replaced with a duplicate, identical purse containing another 1880 penny.

This might have been a feat of sleight of hand but in most cases, it was simply switched inside the hustler’s pocket before his partner asked what was in the purse.

The real skill was in how the suckers were manipulated; how con artists played this was a matter of experience.

And whenever a group of marks are on the verge of taking the bait, it can be all too easy to make them “tip” and play the room like a cheap violin.

As simple as this con is, it has many variants and one of those variations is really quite brilliant.

This version was played around the 1980s by a friend – J.N. – who used it to cover losses in college poker games.

In his version, he left his wallet on the floor, which his partner would find before spinning a similar yarn about a lucky two-dollar bill that J.N. carried every time he played poker.

Just like in the old version of the scam, J.N.’s partner would convince someone to replace the two-dollar bill with two singles.

When J.N. returned, the same scene would play out with one notable difference: only after J.N.’s partner asked about the two-dollar bill did J.N. reveal that his birthday was included in the serial number on that bill.

The same bet would be made, J.N. would work the crowd until everyone was in the pot and then he’d pull back a flap on the inside of the wallet and pull out a second two-dollar bill with the correct serial number.

J.N. would make a passing comment that he had another two-dollar bill that he found a few days ago but act confused when it wasn’t in his wallet.

J.N. explained to me that the purse and penny seemed a little outdated and felt it might attract suspicion, while his wallet seemed perfectly natural in this scenario.

The flap inside the wallet was originally designed to conceal large bills and was the perfect hiding place for a single two-dollar bill.

Since two-dollar bills are so rare, the second (decoy) bill in the main compartment would be quickly found and replaced by the sucker without suspecting there might be another hidden in the wallet.

This solved two problems for J.N. and his partner: he didn’t need to switch anything and the cool-off was automatic because there was no mystery to be explained after J.N. left with everyone’s money!

What this illustrates (again) is that seemingly outdated con games can be dusted off, reshaped, adapted and reworked for a new generation of suckers.

All it takes is a little ingenuity and talent for deception.