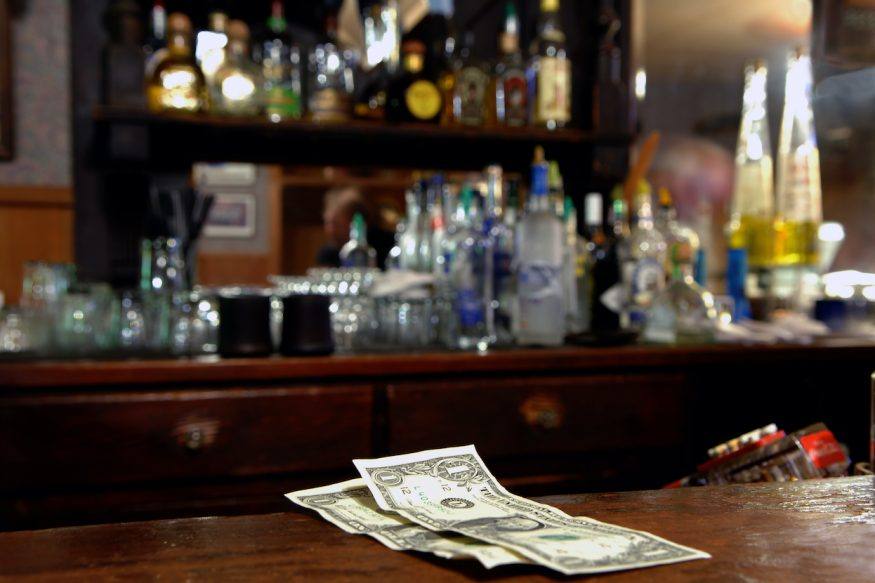 This is a favourite old-time con trick that was described in The Artful Dodges of Eddie Fields and was performed on The Real Hustle while hustling patrons in a Las Vegas saloon.

What I love about this scam is the element of theatre created by the scammers to stimulate a predictable response from the patrons of a bar, then sucker them into taking advantage of the con artist with a predictably disappointing outcome.

It reminds me of the George C. Scott movie originally-titled The Flim-Flam Man and the con games he pulled on small businesses filled with locals around America.

If I were a traveling con man in the 1950s, this would be in my repertoire.

“No, I hate card tricks,” I answered.

He showed me three.

Many years ago, I was in a car with my best friend since childhood, who had suffered through my early years of obsession with playing cards.

As a result, he was quite done with card tricks having received a lifetime’s supply during our youth so whenever we got together, magic was never to be mentioned.

Driving to lunch, we stopped at a traffic light and without warning, the back door opened and someone got into the back of my car.

Thankfully, this was another friend of mine from the magic fraternity who just happened to be waiting to cross the street when my car pulled up and by the time the light changed, we were all on our way to lunch together.

For me, this was the collision of two very different worlds and when my magician friend asked my other friend if he liked magic, he bluntly replied: “Actually, no, I don’t” to which my magician friend said, “Okay, just these two—”.

Imagine my surprise when I found almost this exact situation described in a short story by W. Sommerset Maugham less than week later!

In fact, while the Maugham story features a boorish lout who somewhat redeems himself in the context of the story, my magician friend was simply too enthused to take no for an answer.

But the idea of card tricks being the reserve of loud know-it-alls is not unique to the pages of short fiction and in the 1940s, Eddie Fields and his partner used this idea to concoct a devilishly simple con game that they played all over Chicago.

Eddie would set the scene by entering a bar and establishing himself as a loud, friendly character who would try to get a little (gambling) action going with a few bar bets.

Over the course of a few hours, Eddie would hustle free drinks by performing stunts with olives, forks, drinking glasses and sugar cubes until he was firmly recognised as the bar big-mouth.

During all of this, Eddie’s partner would arrive and settle somewhere close to Eddie while he worked the crowd.

If Eddie’s partner felt the room was ripe, he’d give a signal; Eddie would produce a pack of cards and go to work regaling fellow drinkers with simple miracles.

Once the crowd was ready, Eddie would pull The Circus Card Trick, an ingenious sucker trick designed to win money in the right circumstances.

But for this con, Eddie didn’t pick a stranger to swindle.

He pointed to his secret partner, had him choose a card and by the end of the trick, Eddie’s partner had taken the bait and lost a lot of cash.

Now Eddie’s partner was apparently upset and accused Eddie of cheating and by this point, several others joined the call to kick Eddie out.

To calm the crowd, Eddie offers to teach how the trick works.

He hands the deck to an onlooker and asks them to take out two black aces.

The top half is replaced, and Eddie gives the deck a single cut as he explains that no matter how many times you cut the deck, those two black aces will be together.

Eddie hands the deck to someone to give a couple of cuts then begins dealing cards onto a face-up pile until the first black ace appears – then states that the next card is guaranteed to be the other black ace.

Shamelessly, Eddie tries to work the crowd for more bets, but no one is calling so he reveals the second black ace in his hand.

Now, his partner takes control and asks Eddie to demonstrate the principle one more time – pretending to be confused about how it works.

Eddie repeats the same actions, placing the first ace onto the face-down half and showing the second ace to the crowd.

As Eddie is apparently distracted with the second ace, his secret partner reaches over and cuts a small packet from the upper pile and places those onto the ace pile, burying the first black ace.

Seemingly oblivious, Eddie now places the second ace face down onto the first but everyone now knows that there are a few cards between the aces and as Eddie places the top half onto the lower half, losing the aces in the middle, it seems obvious that he is about to get taken for a ride.

Eddie has the deck cut several times and begins dealing cards face up until the first ace appears.

He takes the next card and holds it out, repeating his claim that no matter how many cuts you make, the next card must be the other ace.

But now his partner stops him and asks:

“How much will YOU bet?”

This is what they have both been working towards.

From playing the part of a blowhard barfly to betting against each other, Eddie and his partner have been working the crowd toward this moment, where Eddie seems about to get his just reward for being such an asshole.

Eddie hands the card he is holding to an onlooker so no one can see it, then pulls a thick wad of cash from his sock.

“Can you cover that?” Eddie asks. But his partner backs down, unable to match Eddie’s bet…

And this is where the suckers are given the chance to bite.

Sure enough, several people in the crowd offer to match Eddie’s bankroll, certain they will win since they saw the other guy place several cards between the black aces.

There should be no way the next card could be a black ace but once the bet is made, the card is shown. And guess what?

When the smoke clears and the bet is lost, the crowd’s money is gone along with Eddie and the other stranger, never to return.

The real secret is in how Eddie worked the crowd, spotted the best marks and played them like a piano but the actual card trick is simplicity itself (with 25 years of practice).

In Eddie’s book, he described a very simple card sleight called ‘The Glide’ to bring both aces back together but on The Real Hustle, I employed a second deal to accomplish the same effect.

Here’s how a second deal works:

When Alex “secretly” placed a few cards onto my first ace, I was busy showing the second ace to the suckers, while they all watched Alex apparently screw me over with his covert cut.

Meanwhile, I put a tiny bend in the second ace as I replaced it on lower half of the deck – supposedly on top of the first black ace – then completed the cut and had the deck cut a few times by people at the bar.

When the deck was returned, I looked for that bent corner and dealt cards face up until I reached that card but without hesitating, continued dealing the SECOND card each time until the other black ace turned up.

In other words, once I reached the first black ace (which I had marked with a bend), I used the second deal to deal cards face up until I reached the ace that had been buried by Alex.

Put simply, the second deal removed the cards from between the two black aces right under the suckers’ noses.

Once I dealt that second ace, the other black ace was already waiting on top; but to the suckers, there was no way the aces could still be together!

All we had to do now was follow Eddie’s lead, press the crowd’s buttons and wait for someone cover my bet, which they did every time.

For more articles by R. Paul Wilson, check out:

6 Reasons Why You Should Never Count Cards