Will The Pandemic Kill Our Love Of Live Poker? 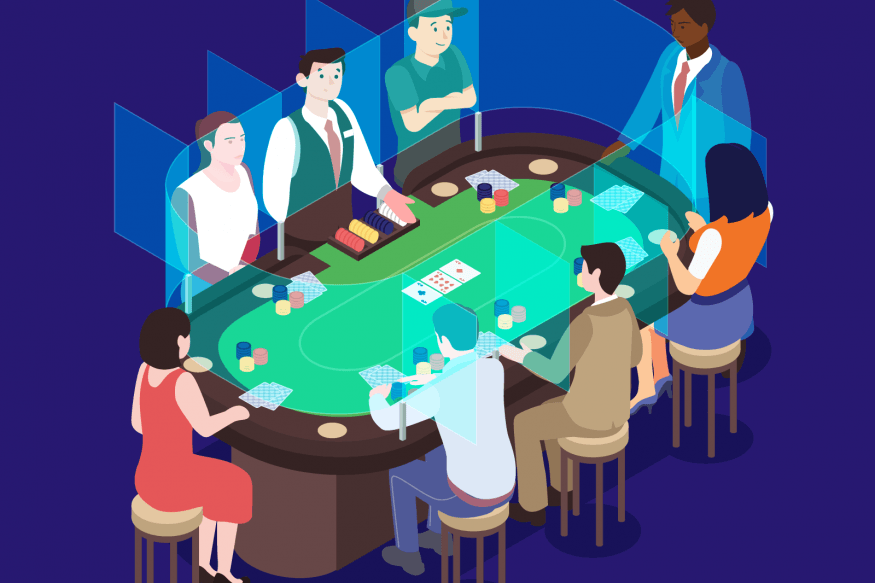 2020 was easily the worst period for live poker. The coronavirus pandemic has shut down card rooms and casinos worldwide, and all major competitions were either canceled or moved online.

This was a huge blow for the poker industry, which, to its credit, has managed to pick up the pieces and find clever workarounds to keep the ball rolling. For the most part, that meant moving things to the virtual realm.

We’re now almost six months months into 2021, and things are slowly starting to get back on track. That said, although casinos are bringing back live tournaments and cash games, it’s not really the same as before.

In most places, you’re still supposed to wear a mask while playing. There are Plexiglas dividers between players, mandatory temperature checks, and all sorts of other measures in place.

If this trend continues, the natural question that comes to mind is: will the pandemic kill our love for live poker?

Are people willing to jump through all the loops and hoops just to play some live hands, or will they give up on trying and transfer to online games – or move on altogether?

Live Poker And The Pandemic: Call It A Bad Year

Never in poker history have we witnessed anything remotely similar to what came to pass in 2020. At one point, Las Vegas came to a complete halt, with casinos and poker rooms shutting down entirely, waiting for some better times.

It was shocking and unprecedented.

The futures of many people working in the gambling industry were hanging in the balance, not just in Vegas but all over the world.

At the same time, many poker players took a big blow as well. Whether semi-professionally or full-time, there are many people who make a living playing live poker.

You might think that moving online was the easiest option for them, but that’s not necessarily the case.

First of all, live and online poker aren’t the same.

You could go as far as to say they’re two completely different games. They require different skill sets, and going from live to online without any proper transition period and expecting to be profitable is optimistic, to say the least.

In the US, for example, there are only a few regulated states, and you can only play online if you’re inside one of these states. Moving across the US in the middle of the pandemic to play poker was also not a real option for most.

So, there was a big outcry from all sides of the industry for the first few months. People wanted live games back, but this just wasn’t possible at the time.

So, they waited patiently to see what transpired, hoping for the best.

After some months of complete shutdown, the live poker scene slowly started to get back on track.

Everybody was excited, from dealers and casino staff to players. The worst was now behind them, and things would slowly start to fall into place.

But many players weren’t ready for what they found in their favorite poker room.

Government-mandated rules haven’t made it easy for the operators. They’ve had to put all sorts of preventive measures in place, from temperature checks at the doors and face masks for the players and the staff, to plastic barriers between seats and limiting the number of players at the table.

I’m not going to go into the validity of any such measures or try to argue for or against them. It’s far beyond the scope of this article and, frankly, a rather moot discussion at this point in time.

The bottom line is, the live poker experience has changed quite drastically.

For those who have been in the game for a while, this was quite a shock. As much as they were looking forward to getting back to the felt, this new environment just didn’t sit right with many.

Unsurprisingly, social media was flooded by the comments coming from both sides of the fence.

Some were over the moon that they were able to play live again, regardless of the restrictions. Others, though, felt like all of it was killing the experience and took the life out of it.

No matter what side you take, it’s quite clear that the pandemic and all it brought with it had a big impact on live poker and has put a big strain on it.

Eventually, these measures will (hopefully) become a thing of the past, but will some people lose the passion for live games in the process?

The Fear Factor: Can Live Poker Bounce Back?

It seems that the world is finally on its way to leave the pandemic behind. Vaccinations are happening as we speak, and countries worldwide are lifting restrictions.

Slowly, things are coming back to where they used to be prior to 2020.

But it could still be a while before people feel comfortable sitting in a room with hundreds of strangers breathing behind their necks.

There is still a lot of uncertainty in the air, and so many questions are left unanswered.

While things are certainly looking up, it seems we’re still a far cry away from going back to the “old normal”.

After more than a year of fear, threats, and warnings, many people won’t be in a rush to go back to the old, “carefree” lifestyle.

Some will, for sure, but not everyone has the same view of how to handle the situation.

Some in the poker community believe that things shouldn’t be rushed. Even if there are vaccines and a much better understanding of the coronavirus, they prefer a slow and cautious approach.

You can be certain that people who share this opinion will be in no rush to come back to crowded live tables.

These feelings will likely have a significant impact on the general love for live poker. Will it kill it completely?

Absolutely not, but I’m sure that there will be a lot of hesitation in the coming months, especially with regards to big events.

Can The Industry Help Keep The Passion Alive?

It’s quite clear that even with all the positive changes as of late, the live poker industry will have some challenges to overcome to get back where it used to be.

On one side, some players may avoid live events and games for one reason or another. On the other, there is also the issue of profitability.

Casinos and poker rooms have to meet certain expectations to keep their business profitable.

In most places, poker isn’t exactly the primary activity. It’s often used more as a way to attract people to the venue, in hopes they’ll also spend some time playing slots or pay a visit to the pit.

With the new challenges and restrictions, many places may be put off the idea of hosting live poker altogether. It’s a lot of hassle for very little gain, and if their capacity is reduced as it is, there may be very little reason to organize live poker.

Luckily, this doesn’t apply to some of the biggest casinos, especially those in Las Vegas, where poker has been a part of their overall offering for decades.

So, on their part, casinos will try to get things back on track.

For example, the WSOP has already announced there will be a live event this year (albeit a few months later than usual), and the response from the community has been largely positive.

How big of a crowd will they be able to attract?

This remains to be seen, but many people are itching to play live poker and jump at the opportunity after such a long forced break.

Several other Las Vegas casinos have also announced major live events, and these things will certainly help restore the love for live poker and get people back in the right mindset.

Moving forward, the poker industry will play a huge role in what happens next with live poker.

They’ve been fighting an uphill battle for a long time now, but that’s the only way forward.

If major venues and organizations decide they’ve had enough and throw in the towel, people will have no other option than to accept it and move on.

Not Even The Pandemic Could Stop Biggest Fans Of The Game

When you read and watch the media, there is often the feeling that the whole world has come to a stop in so many of its segments.

Well, it’s no secret the media love drama, so they show things in a certain light to achieve a more dramatic effect.

While casinos and poker rooms may have shut down, it was virtually impossible to stop people from gathering in private games.

And gathered they did.

Again, I won’t go into a discussion about the merits of such decisions. Everyone has their own opinion, and let’s leave it at that.

But what this has clearly shown is that there is no lack of love for live poker, even in the most difficult and uncertain of times.

In many places, private games were the only option for anyone wanting to play a live session, and this side of the industry started to boom.

Just looking at the example of my city, we went from having one semi-private, fairly high-stakes game to like four or five games that are much more approachable to regular players. And poker isn’t even that big here at all.

So, it’s safe to assume that these kinds of games have flourished in environments where people are much more into poker. If nothing else, they helped keep the fire burning while waiting for the “real thing” to come back.

Some will disagree, but that’s fine.

This article is only about whether the pandemic will kill the love for live poker, and, luckily, this doesn’t seem to be the case.

The past period wasn’t easy on anyone, and the world has seen many changes. We had to adapt to new circumstances, and everyone handled it the best they could.

As for live poker, things were quite rough for a while, but there is finally a brighter future on the horizon.

For the time being, live venues still have to deal with some restrictions and limitations, which might put some people off the idea of playing. But, hopefully, these will go away as well, and live poker will go back to its old self.

There might be a short-term fall in numbers as people bounce back and readjust to the old style of life without worrying about the pandemic. But I don’t think that’s anything the poker industry can’t handle.

It’s not the first crisis it had to deal with, and it probably won’t be the last.

So, has the pandemic killed our love for live poker?

I really don’t think so, and I’m convinced that there is absolutely nothing to worry about if you prefer the actual felt over the virtual one!