How The Ace Of Spades Became Known As The “Death Card” 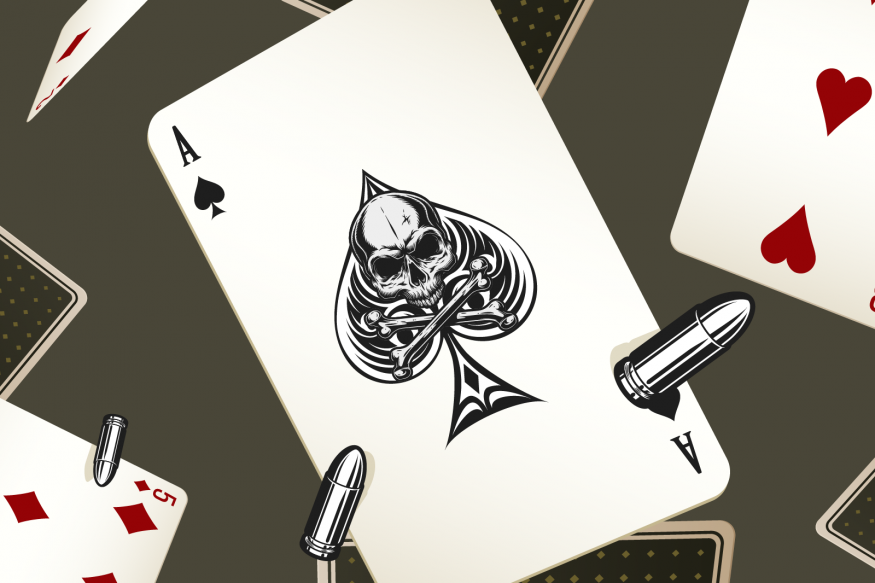 Even if you’re not all that familiar with this long-held association of the Ace of Spades and the “Death Card,” you can probably hear Motörhead singing their famous song, ‘the ace of spa-aades’ blaring out of the speakers.

Not only was this the song that made the band, it’s also the highest and most-valued card in the deck.

Perhaps, like me, the title’s the only part of the song to which you can comfortably sing along, or ever really paid much attention to (sorry to all you diehard Motörhead fans!).

Take another listen though and the fast-living rhetoric of the gambling thrill is all over the song, with special mention to this “dead man’s hand again”.

So Where Did This All Begin?

There are many thoughts and theories on how the highest-valued card became synonymous with death, but regardless of its origins, it seems to be well and truly established in the superstitious hearts and minds the world over.

But let’s go further back and explore some of the history that gives this fated card its doom status.

Way back in medieval times, when blacksmiths made armor and weaponry, to provide some mark of quality they often stamped their work with the Ace of Spades.

Given the usage of their ware, this ominous link with the symbol led to its association with death.

In the 1700s, stamp duty was extended by Queen Anne, in England, to include playing cards.

To indicate that this tax had been paid the Ace of Spades, with its ornate insignia, was to be signed by the manufacturer.

The signing process was time-consuming and costly – hiking up the price of the deck by up to 12 times as much! – so people began faking their own.

This, of course, carried a big risk. Producing counterfeit cards was a capital offence resulting in death by hanging.

You fake an Ace of Spades stamp, you get caught, you die.

As such, the Ace of Spades spelled out death to many people and this connotation was hard to shake off.

In the 18th Century it was a favorite amongst pirates to let a traitor or informer know he was nearing his end; that he was ‘on the spot’.

It came a close second after the skull and cross bones as a symbol of intimidation.

Then there’s the design of the card itself – for some people the spade represents the tool used to dig your grave.

And since the Ace card carries the highest value, it will get your coffin dug deepest in the ground.

With the deck comprising of 52 cards, it’s believed that each card represents a week in the year, and each suit a season. The spades represent winter and the Ace heralds the Week of Yule, the death of the year.

As mere pawns in the game of nature, try as we might, we cannot escape the death cycle and the card’s place in the calendar is a reminder of that.

The beginning of winter was a time feared and dreaded by members of poorer classes as it meant the start of the struggle through to spring.

Will there be enough food? Will we stay warm enough? Many families suffered death through famine and freezing.

In the lawless days of the Wild West, Wild Bill Hickock immortalized the ‘dead man’s hand’ when he was shot through the head at point blank range by Jack McCall seeking vengeance for a loss at cards a few days earlier.

He died instantly, slumping over the table where he was playing poker, with his cards still in his hand, now spattered with blood.

And what was he holding? A mixture of black aces and eights.

Yet again the Ace of Spades strikes, with death following its presence.

There are a couple of theories surrounding the use of the Ace of Spades during combat in the Vietnamese War.

The first theory is that the Americans believed the Vietnamese to be highly superstitious, and that the Ace of Spades struck the fear of death in their hearts.

It was rumored that the European associations with the card hit the Vietnamese even harder due to struggles faced during the colonial time under French rule across six decades.

So for the Vietnamese people, this symbol allegedly spelled cruelty under foreign control and influence.

This rumor apparently spread fast and armed with this knowledge, American soldiers wanted to use the symbol as a form of intimidation.

In 1966, following a request from the 25th Infantry Division, the Cincinnati-based US Playing Card Co. donated and posted 1,000 decks of cards, comprized solely of Aces of Spades, to troops stationed in Vietnam.

The media back in the States got hold of the story and amped up the rumor, saying the Viet Cong feared the card more than the bombers.

It turns out, in fact, that the cards acted more as a morale boost to the Americans.

Stuck onto helmets, carried around in pockets, and left in situ after battle. Almost like a lucky charm, the cards made some of the soldiers feel stronger and like a warrior.

It was a tremendously difficult time for all involved and this offered some American soldiers a bit of encouragement out in the field.

It became a practice amongst some American soldiers to leave the card on the eyes of a dead Vietnamese soldier so that it would be the last thing they saw, or in their mouths as a warning to other enemy soldiers.

In other accounts it’s thought that to the Vietnamese it wasn’t so much a symbol of death but a phallic symbol, and that this in turn could’ve led them to believe the Americans to be necrophiliacs.

It certainly had the effect of clearing space for you in a bar, or scaring off any potential romantic partners, according to Captain Edward N. Voke of the 6th PSYOP Battalion in 1966.

He was curious about the reaction amongst locals so asked his platoon to casually pull them out in social settings. It did, indeed, appear to spook people.

But then again, if a foreign soldier brought out a well-known symbol associated only with negative connotations wouldn’t you stay away?

And on the flip side, other theories claim to have never even heard of or seen the Ace of Spades being used in any way.

It’s thought that any ideas behind the card being effective against the ‘superstitious’ Viet Cong stems from ignorance and racism on the American side.

Thanks to Francis Ford Coppola film, Apocalypse Now, the card became a symbol of the war itself.

And What About Today?

In a more modern context, the Ace of Spades and pop culture have a long and exciting relationship.

It’s very often used in association with rock music and motorcycle culture – there’s nothing cooler than danger, and there’s nothing more dangerous than death – two big facets of these cultures.

It’s the most popular tattoo and many a rocker, biker or gang member will proudly adorn themselves with the symbol. To up its deathly connotations it’s often accompanied with fire, flames, and skulls.

A quick scan of Ebay will confirm its unending popularity. Is it that death is still such a taboo in the West that we have such an obsession with it?

Patches worn by American soldiers are available to buy, including one that puts the Ace of Spades side by side with the Grim Reaper.

Or if you don’t fancy a patch, you can get a t-shirt of a giant Ace of Spades card with a skull planted in the centre of the spade.

Not only does it feature in pop culture references, it’s known that when Cliff Burton, the bass guitarist for Metallica tragically died, aged 24, in Sweden, 1986, he’d pulled the Ace of Spades earlier that night.

This card gave him the ‘winning hand’ that gave him first choice of the beds on their tour bus, and when it crashed in the middle of the night, without a safety belt, he flew straight through one of the bus windows and was then crushed by the vehicle.

And whilst all of this talk of death might seem a bit depressing, it’s good to remember that with death, the end of a cycle, comes a fresh start – the beginning of something new.

In tarot, the Ace in each suit is a good omen as it offers the seeker hope for a new cycle. After the chaos of destruction has settled, out of the ashes a brighter future can be birthed.

For something similar, check out:
10 Most Amazing Facts About Playing Cards