14 Amazing Vintage Videos Of Vegas Through The Ages 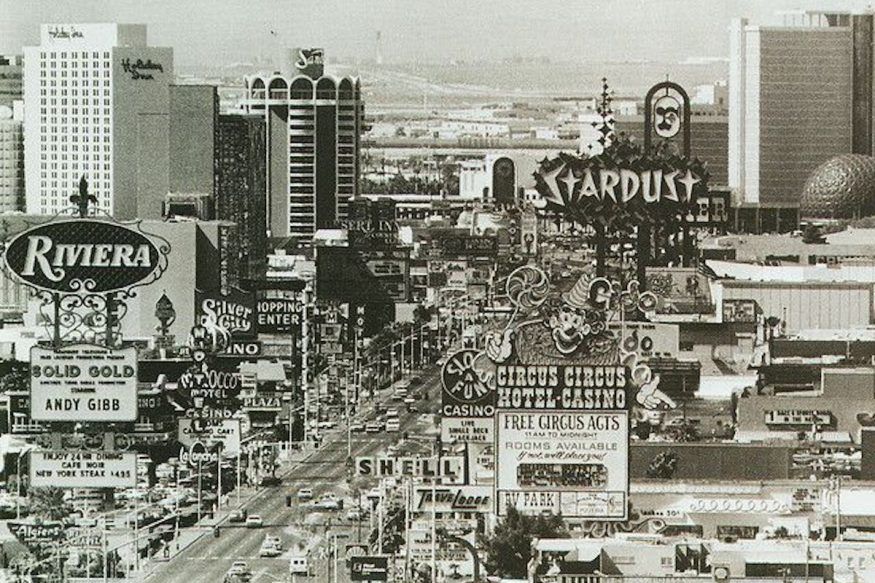 Whilst Las Vegas is a comparatively young city it’s already bagged its fair share of history and changing faces.

Since its first casinos in the ‘40s through to its current landmark status, it’s always been known and loved for its gambling opportunities.

Let us show you how it’s developed over the decades into what we know and love today.

Although gambling was legalized in 1931 in the desert state, it wasn’t really ‘til the 40s that things got going. In 1941 the Las Vegas Army Airfield was activated which increased footfall in the city.

With the building of the Flamingo Hotel and Golden Nugget Casino in 1946 the city of Las Vegas was marked out for what we know today.

In this vintage video we see other clubs such as the Monte Carlo, the Eldorado Club, and the Boulder club that popped up shortly after and bolstered the city’s rep as an entertainment destination.

It’s clear from this early footage that Las Vegas was always going to be about fun. Mobsters played a key role in getting the industry going by investing heavily.

We see Siegel in the video alongside actor Bruce Cabot and restaurateur Michael Romanoff.

During the 50s Las Vegas really boomed (in more ways than one!) and the population rose by 161% to almost a quarter of a million.

Tourists flocked for the exciting nightlife and for the chance to see a nuclear detonation every day at dawn.

The Nevada test site was located close enough to the casinos so when they tested nuclear bombs, one could see the explosion.

For many, seeing a mushroom-cloud smoke up in the air was the perfect way to end a beautiful night.

In the next video below, we take a sunny tour along the Strip as it was then past old haunts such as the Sahara, the Riviera Hotel, and billboards for El Morocco.

There are great views across the desert, and you get a real sense of a holiday destination.

Not only was Las Vegas’s popularity soaring due to the great casinos, it was the way of life.

People were attracted to it for the romantic potential of the place. With divorce easy to get administrated and the option to immediately remarry, it was the perfect place to snap up a partner.

In this rare and personal footage of a holidaymaker visiting Las Vegas in the 60s there’s a wistful charm that reaches out to us.

Capturing the magic of those glittering lights that so many tourists must have enjoyed on coach trips there.

With such a focus on the people, we really see the impact of the city on those that visited, and the magic it promised is reflected in their eyes and smiles.

In this footage from the early 60s we see the Strip take on the identity that we recognize from today.

Until then most of the action had been downtown but here we see the action really ramping up on the Strip.

With Caesar’s Palace opening up in ‘66 with Circus Circus following in ’68 it was a time of development.

The Flamingo Hotel was purchased the same year by the influential Kirk Kerkorian, who is fondly known as the godfather of Las Vegas.

Although this footage was taken by director Ray Dennis Steckler in a bid to pad out some of his movies, it provides a fascinating insight into the vibe of the time in Las Vegas.

As you can see, the city was thriving, with hot, young people all over the town soaking up the rays and the good times.

The Strip was now known around the world and Steve Wynn had made his first purchase (of many) in ’71 of the Golden Nugget.

MGM Grand Hotel & Casino was up and running in ’73 and big names were plastered across billboards. This was the place to come for entertainment.

And speaking of big names, we couldn’t run a piece on the development of Las Vegas without a nod to The King who made his name in Sin City.

In this unique video from 1970 above, we see him rehearsing some numbers and reveling in his talent and musical prowess.

The quality is pretty bad but it’s still amazing to see this behind-the-scenes footage.

In a bad start to the decade, in November 1980 the MGM went up in flames, tragically taking the lives of 85 people. The same length as a football pitch, the flames spread across that distance in 20 seconds!

This was in the days before health and safety so many areas of the hotel didn’t have sprinklers.

When the place eventually reopened it was as Bally’s Las Vegas resort.

But by the end of the decade, with the Cold War over and the economy revving up, the Strip continued its evolution.

Things were getting bigger and better. Tropicana and Marina high-rise resorts sprung up, paving the way for more giant complexes and in ’89 the Mirage opened its doors.

This was the beginning of a golden era for the USA.

Nevada was declared the fastest growing state in 1990. This was one party that just wasn’t slowing down.

In 1990 Las Vegas took a turn towards more family-friendly action with the opening of the Excalibur Hotel.

A year and a half in the making, the opening welcomed its first couple for marriage with fabulous costumes and balloon displays.

With more attention on magic, the Luxor Pyramids came into being in ’93 and the below documentary shows some of the technology that went into its creation.

And for a direct look at the changes that the region has undergone check out this home movie, drawing parallels from footage taken between 1988 and 2019.

If you enjoyed this, be sure to check out our other post on vintage videos of Las Vegas shows: