The Top 10 Biggest Main Event Winnings Of All Time 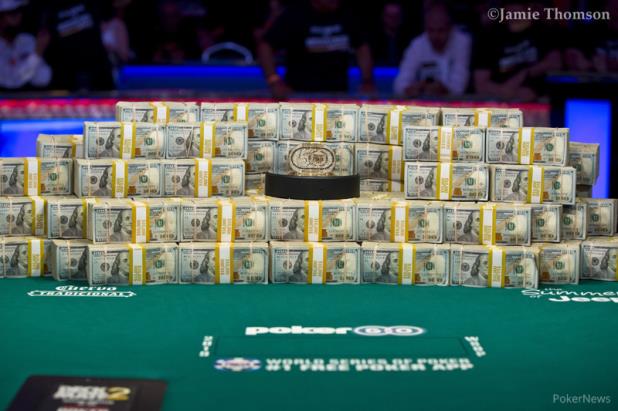 As you might know, poker surged in popularity after 2003. Ever since, Main Events have had huge fields with the winners taking home massive prizes that those who came before them couldn’t ever have dreamed of.

This article will look into the 10 biggest ever Main Event winnings on record. If you’ve been on the fence about trying your luck at the WSOP, these numbers might help tip the scale.

The 2006 WSOP Main Event remains the biggest one to date. The tournament attracted a record-breaking field of 8,773 runners, creating by far the biggest prize pool in WSOP history.

When the dust settled, it was announced the winner would receive $12 million!

This was the first time the winner was poised for an eight-figure amount, and it was a rather big increase compared to the previous two years.

After a grueling multi-day battle on the felt, Jamie Gold took home the win and the $12 million.

Gold was an amateur player who got into the Main Event thanks to his deal with a casino operator and went on the hottest run of his life to secure the win in the biggest-ever Main Event field.

Gold’s victory was marked by some controversy, as it later came to light he agreed beforehand to give half of his Main Event winnings to one Crispin Leyser, the man who helped him get the deal.

In the end, Gold agreed to pay Leyser an undisclosed amount of money, so he wasn’t able to keep the entire amount.

For the most part, the prize for the Main Event winner is a direct reflection of the total number of buy-ins. The more entries there are, the bigger the win.

However, Martin Jacobson managed to pocket $10 million for his 2014 win, although this wasn’t one of the biggest Main Events in history.

That year, the organizers decided to try a little experiment, and they guaranteed the payout of $10 million for the winner, regardless of the overall prize pool.

This was great for whoever would walk away with the bracelet but not so great for the runner-up and other players who made it to the final table.

This was by far the biggest discrepancy between the first and the second place in Main Events, and it didn’t go over too well with the players. So, the WSOP abandoned the idea.

To add insult to injury, Stephensen had to pay more than 50 percent in taxes on his winnings.

Jacobson, being a UK resident, didn’t have to pay any taxes, so in the end his payout was four times bigger.

Although the Main Event saw a massive uptick in 2006, it turned out to be a bit of a fluke.

In the years to follow, prize pools couldn’t get anywhere near the 2006 record. In fact, it took all the way until 2019 before another Main Event would come close.

In 2019, 8,569 players descended upon Las Vegas in their quest for fame and fortunes, coming very close to setting a brand new record. Although that didn’t happen, the prize pool exceeded $80.5 million, and $10 million of that was set aside for the winner.

This time around, Lady Luck favored Hossein Ensan, an Iranian-born German player whose rather unorthodox and bold playing style left his opponents puzzled and perplexed.

Ensan defeated the Italian pro Dario Sammartino in the final skirmish, locking up what is by far the biggest win of his poker career.

The 2008 WSOP Main Event was a very important one in WSOP history.

It was the first time ever that the tournament didn’t play down to the winner. Instead, the final table play was suspended until November, when players would come back to Rio to play until there was a winner.

The concept, which came to be known as the “November Nine”, stuck around for quite a few years before organizers went back to the old way of doing things.

Coincidentally, this was also the year that awarded the fourth-largest prize for the Main Event winner.

The final nine came back to play for the massive first-place prize of over $9.1 million. When it was all said and done, the Danish player Peter Eastgate held all the chips.

Eastgate didn’t break the record for the biggest Main Event win, but he did become the youngest-ever Main Event winner at the time.

That record was short-lived, though, as it was broken the very next year.

The year 2010 saw 7,319 players going to Las Vegas to play in the Main Event. It was the second-largest tournament field in the event’s history up to that point, and it stayed in this spot until 2018.

Despite the large field and the total prize pool of almost $69 million, the winner took home only the fifth-biggest prize in history.

The Canadian pro Jonathan Duhamel took home the victory and the coveted bracelet after outlasting every aspiring player in the tournament.

For his efforts, Duhamel received $8,944,310. This was also the first of three WSOP bracelets that he’s managed to win up to this point.

In 2011, the Canadian was a victim of a home invasion, and his Main Event bracelet was stolen.

He did eventually get it back when a street cleaner found it, but it was in a really bad condition, with many pieces missing.

Luckily, the thieves were only able to get $150,000 in cash from his home, half of which was retrieved when the police caught the perpetrators.

It was an important moment in the WSOP’s history, as numbers were ticking up once again, beating the previous year’s count of 7,221.

As is usually the case, a massive chunk of the overall prize pool was set aside for the winner.

This time around, it was a nice-looking number of $8.8 million. It may not have been the biggest ever Main Event payout, but it was definitely a life-changing amount.

Interestingly enough, one of the players at the final table was the 2009 Main Event winner Joe Cada, who was in a great spot to make history and claim the second ME bracelet.

This didn’t happen, though, as he was eventually sent to the rail in fifth, earning a $2.1 million consolation prize.

There are quite a few strong players hailing from Germany, but it was only in 2011 that the country got its first Main Event winner.

It was Pius Heinz, a young professional born in 1989, who outlasted the field of 6,868 runners and pocketed more than $8.7 million for his performance.

Interestingly enough, Heinz has never been too keen on playing live poker.

He honed his skills playing poker online and found the live play way too slow and boring. Yet, he decided to give that 2011 Main Event a try, entering Day 1A, with plans to get over it quickly and go home.

Little did he know that Lady Luck had very different plans in store for him. After several days of play, he was the one holding all the chips and taking the winner’s photos for the media.

Despite this huge success, it seems his approach to live tournaments hasn’t changed much.

Heinz has only cashed in a few events since his Main Event victory, and his total live tournament winnings (including the ME) currently stand at close to $9.1 million.

In 2008, Peter Eastgate became the youngest Main Event winner in the history of the competition. He was 22 when he won, taking down the record long-held by none other than Phil Hellmuth.

Unlike Hellmuth, who got to enjoy his achievement for almost two decades, Eastgate’s record was broken the very next year.

Joe Cada was only 21 when he entered the 2009 Main Event, and this was the first year he was legally allowed to play. The minimum age limit to play in most casinos in the US is 21, and it’s the age limit in place for the World Series.

That year saw 6,494 players generate the prize pool of $61 million, with over $8.5 million set aside for the winner. In the end, it was Cada standing tall, claiming the big win, and becoming the youngest Main Event champion.

But, this wasn’t the only thing that marked that final table.

The runner-up Darvin Moon was the talk of the tournament. His story was similar to that of Chris Moneymaker, and if he were to win, many believed it would trigger another poker boom.

In the end, Moon finished in second place, pocketing close to $5.2 million, but there wasn’t a massive influx of players after that.

The second interesting story was that of Phil Ivey, one of the best poker players in the world still awaiting his Main Event breakthrough.

That year, Ivey made it to the final table, and there were countless fans around the world rooting for him to take it down.

Unfortunately, things didn’t quite pan out for Ivey who was eliminated in 7th when his AK couldn’t hold up against Moon’s AQ.

The 2012 Main Event saw very similar numbers to the one from 2009. Although the number of entries was slightly larger (6,598), the final prize for the winner was a bit smaller.

Greg Merson walked away with the win, pocketing $8,527,982 for his performance.

Merson was a young gun who came up playing online cash games.

However, 2012 was a huge year for him, as he ended up winning another WSOP bracelet, claiming the victory in the $10,000 6-max Championship.

As a result of this and other cashes during the Series, he also claimed the coveted title of the Player of the Year.

Despite his success on the felt, Merson had to fight many demons on a personal level. He became addicted to drugs when he was 17, and his battle with addiction was a long and grueling one.

According to him, he finally overcame it in December 2011, just a few months prior to his stellar performance in the 2012 World Series of Poker.

Rounding up this list of the biggest Main Event winnings is the 2013 Main Event won by Ryan “The Beast” Riess.

This was the first year of playing live poker seriously for the man with the peculiar nickname.

He certainly started things off with a bang, as his win netted him $8,359,531. Riess continued playing in the years to follow, and his live tournament winnings currently stand at just over $15 million.

For more WSOP content, check out:
We Analyzed Every WSOP Winner Since 2003 To See If A Certain Personality Makes You A Born Champion