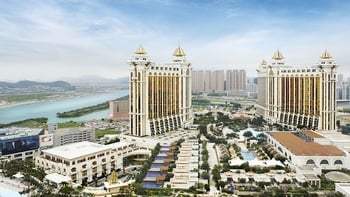 Despite what its name might suggest, Galaxy Rio Macau is not a sci-fi themed hotel casino resort. Rather, it reflects the world-class Asian spirit with gold and white décor.

Galaxy Rio Macau is a large hotel casino resort that sits on the Cotai Strip in Macau. It has been around for four years, but it has already gained a good reputation because it has a lot to offer: an artificial beach with six swimming pools includinga wave pool, laser shows, a spa, restaurants, and shops.

This hotel casino resort is still being built. Phases one and two are complete, and the next three phases are still being planned.

Galaxy Rio Macau was developed and constructed by Galaxy Entertainment Group. It was built in phases. The first phase was finished and opened on May 15, 2011. Phase two was completed and unveiled to the public on May 27, 2015.

Of course, all of the guests staying in the rooms and suites have access to the outdoor heated pool, Jacuzzi, gym, the Grand Resort Deck, and the Skytop Wave Pool.

The gaming facilities at Galaxy Rio Macau are split into five different areas. There are over 600 gaming tables and 1,200 slot machines and other types of electronic gaming machines. By signing up for their membership program, you will get to enjoy many different types of generous promotions and fun events exclusive to members only.

Relaxing: Galaxy Rio Macau has six swimming pools just ready to be used. The pools include the Skytop Wave Pool, the Grand Resort Deck, an outdoor pool, and three large Jacuzzis at the pool deck. There is also a spa on the premises.

Dining: Galaxy Rio Macau has an extensive list of restaurants available on their premises.

Shopping: There is practically a mall built into this hotel casino resort. You would be surprised by how many stores they have!

Entertainment: Galaxy Rio Macau hosts many different types of events. Not only that, but they also have a movie theater, a Broadway type of theatre, a private members-only nightclub, and many resident performances.

There are many more attractions and entertainment venues waiting to be built during the next three phases of construction.

Why Galaxy Rio Macau Gets 4 Stars

In its 4 short years, Galaxy Rio Macau has already received a handful of awards:

The 4-star rating is based solely on the fact that you can spend all your time at Galaxy Rio Macau and be entertained the entire time without having to leave the property. We are holding back on giving this resort a 5-star rating until it is completely built.

What table games does the casino offer?

How many different types of slots will I find at Galaxy Macau?

The casino has more than 1200 slot machines for your enjoyment. Like all of Macau's top tier casinos, you'll find primarily video slots, but you can also enjoy video poker. Not only will you find games available for every budget, but there are great multi-million dollar progressive jackpots up for grabs. The casino also stages slot tournaments, but you'll need to be a member of the loyalty program to participate.

Is a membership required to play?

Although you are free to play without a membership, it's a good idea to register with the casino. It's the only way to access special promotions and great benefits. Membership is absolutely free and will give you access to the widely popular slot tourneys.

What is the required age to gamble at Galaxy Macau?

The minimum age to gamble in Macau is 21. The gambling age now applies to both locals as well as tourists despite what you might read elsewhere. Be sure to bring proper identification to avoid disappointment when visiting the casino.

Is there a smoking section?

For the enjoyment of all players, the casino features both non-smoking and smoking areas. Most of the areas that prohibit smoking have a smoking lounge in close proximity.

What are the minimum and maximum limits on the floor?

Table minimums and maximums vary depending on demand, time, day of the week, and season, but Galaxy Macau does a great job of meeting the needs of locals and tourists alike. You'll typically find table games with bets ranging from $300 all the way to $1,500,000 (Hong Kong dollars). If you are looking for table games with lower limits, you can try the electronic tables, which cater to budget conscious players yet offer greater flexibility overall.

Does the casino have special promotions for VIPs or high rollers?

The casino offers great promotions for all players including VIPs. Once you join the membership program, a VIP host will contact you with special offers to meet your needs and tastes. Expect to be rewarded with entertainment, accommodations, gifts, transportation and more.

Are there any restaurants nearby?

With more than 120 restaurants at Galaxy Macau, you won't have to travel more than a few feet to sample fare from across the globe. You'll find great Italian, Cantonese, Japanese, Thai, Dim Sum, Korean, French, Congee, and Macanese options at a variety of price points. There's even a Starbucks and McDonald's if you want to keep it casual.

What kind of accommodations does the Galaxy offer?

The Galaxy hotel offers 1,500 rooms and suites ranging from contemporary deluxe rooms to majestic Royal Suites. No matter what level of luxury you choose, you'll have access to an outdoor pool, three impressive Jacuzzis, and the Grand Resort Deck. You can compare your lodging options in greater detail by browsing the article above.