Can Quantum Entanglement Really Help You Win At Blackjack? 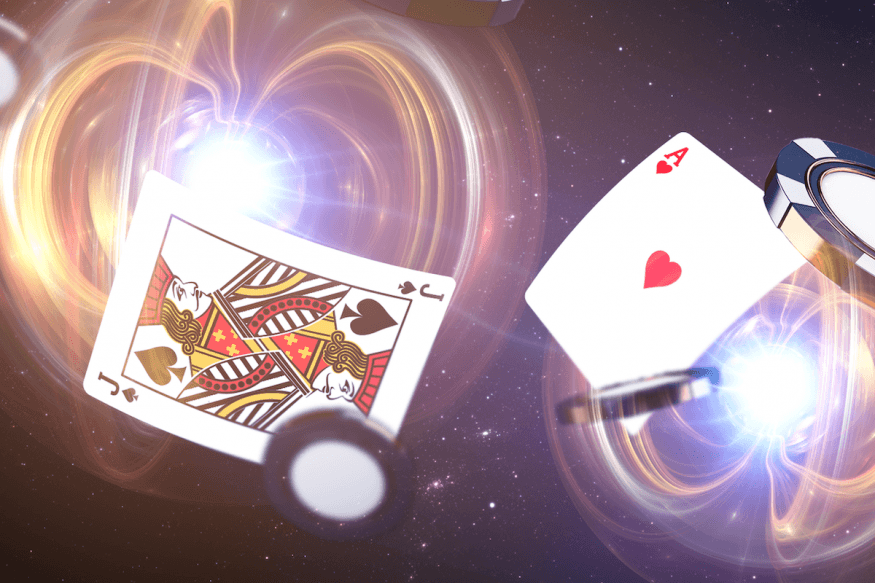 Every blackjack player wants to find an edge over their opponents, right?

You’ll be using strategy and mathematics when you play your normal game, often without even realizing it, while others employ more intentional systems like card counting.

But have you ever thought about using quantum entanglement?

Er no, neither had we.

Not simply the stuff of an implausible Hollywood plot, the use of this high-flying theory to beat the house in blackjack has actually now been studied at length, by no less than the bigwigs at MIT.

And they should know.

Famously, the university’s very own blackjack team managed to beat the house at casinos for over a decade, by working as a team to count cards. It was even made into a book and later inspired a couple of movies.

In this piece, we’ll find out exactly what quantum entanglement really is, why it matters in blackjack and whether everyday players can take advantage of it too.

Starting with the important stuff: what exactly is quantum entanglement? Well, we have to delve into the realms of quantum mechanics to find out.

Quantum entanglement is a term that describes two separate objects or particles that have become ‘entangled’ or which ‘correlate’ with each other so much so that, according to MIT News, “the correlations between them are stronger than what would be predicated by the classical laws of physics and probability”.

Meaning…they are not completely independent from each other, even when separated, and can potentially inform each other’s outcomes.

We also like the explanation in Forbes, which acknowledges that quantum entanglement is “one of the weirdest ideas in modern physics”, before going on to sum it up as being when “two entangled particles, no matter where they are in the Universe, can communicate their states with one another instantaneously.”

So if we have two separate but connected objects that can communicate, how does this impact blackjack?

Of course, it’s all about the cards you’re dealt… and the correlations between them, influenced by the fact that they are from the same deck and that there are only a limited number of cards available.

Is the idea of entanglement at play? Some MIT and Caltech academics recently decided to find out.

Dealing From The Same Deck

In an experiment, published in July 2020 in Physical Review A, the authors examined advantages gained from using quantum strategies in the popular casino game.

This was done by the players sharing a mathematical model, which they ask readers to imagine as ‘box’ or a measuring method, to inform their choices, with the second player using both their own choices based on the ‘box’ system, as well as the first player’s choices to inform their move, or lack of one.

When compared against two other scenarios including player one showing player two their card and card-counting (without communication), over thousands of rounds of blackjack, the quantum entanglement strategy did hand a better (but still small) advantage to player two than the card counting did.

So, Can Quantum Entanglement Work for You?

Every time you take to the table, as a blackjack player you make decisions on whether to keep the cards you’ve been dealt or accept a new one to build the best hand.

The aim is to get closest to, but not over, the ideal number of 21 than either your rivals or the dealer.

So, of course, any system that can theoretically provide you with more information, even if it’s not tangible information, such as the exact card value, should influence your play and give you an advantage boost.

Yet, it’s worth noting that the results from this latest MIT experiment still only gave players a slight advantage over the dealer.

Though this seems to have occurred when the dealer’s deck was down to the bare bones – which makes sense if you think about it – with a fuller deck meaning there are more card possibilities to come unstuck on.

But could you implement your own ‘entanglement theory’ on your next game by agreeing with a partner on a system that would inform your choices?

Co-author of the publication, Joseph Formaggio, told MIT News that for maximum effect you’d “require a very large investor, and my guess is, carrying a quantum computer in your backpack will probably tip the house. We think casinos are safe right now”.

So no, you don’t have to be an MIT blackjack physics whizz to use quantum entanglement in your game.

But you might need to meet a generous casino whale as, to see the benefit of the theory, you’ll need both a formula and big financial backing…

But hey, if you fancy your chances (and are way smarter at physics than us), then you can always test your knowledge and skills over at some of the best online blackjack casinos.

If nothing else, you can play for fun.

Everything You Need To Know About Arbitrage Betting