R. Paul Wilson On: The Jam Scam – How Not To Get Conned At A Market 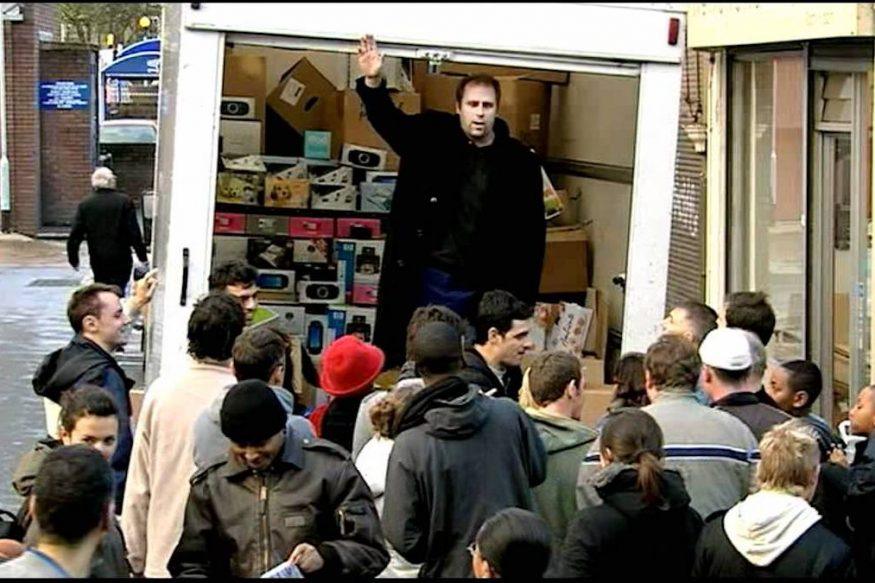 The jam auction is a veritable old-school scam that has stood the test of time and can be found in almost any major city, tourist trap or county fair.

It is a way to manipulate large crowds into falling for a sudden bait and switch that leaves almost everyone disappointed.

But not all jam auctions are created equal.

Some – perhaps many – leave buyers wanting more, despite using the same psychological techniques employed by outright scammers. And, as I learned on an early episode of The Real Hustle, some Jam Auctions are not even a scam!

“The Bouncer” was a nickname coined in the book Rich Uncle From Fiji, which described a novel twist on the jam auction where the crowd was played from the back of wagon, hooked up to a full complement of horses.

The items sold in this auction were a variety of common and fancy goods, all secured at very low price (or stolen for the ultimate discount).

These items were sold in a series of auction “rounds” where buyers would be passed their purchases along with a bag to encourage them to buy more but what fascinated me was the ingenious “hook” that kept people buying until the final sting.

I first read this scam as a kid and was excited when we decided to test it on The Real Hustle but despite having described this scam for years in my public shows and speeches, it turned out that I had no idea how the con game was going to end.

Here’s how it plays out.

From the back of a truck I pitched until we had a small crowd, peppering them with promises of bargains they can only find at the market; deals no high street store could afford and so on.

Once I had enough interested onlookers, Alex (acting as my assistant) slid a box of grooming kits, which I showed to the crowd, unzipping the case to show the combs and clippers inside.

This kit, I claimed, would cost £20 in any store but from the back of the truck we were offering it for just £1!

Hands were raised and Alex distributed grooming kits, each in a plastic shopping bag to hold more items.

This is where the con began.

I told the crowd that we promise satisfaction and promised they would be happy.

To confirm this, I asked: “Who’s happy?”

This time, more hands were raised, and a few people called out to confirm their happiness.

Then I said, “If you’re happy, raise your hand! Alex, give them their money back!”

To everyone’s surprise, Alex now returned money to any buyers who raised their hand.

Next, I presented a package of pens worth £30 (or so I claimed) and repeated this procedure for £5 from each member of the crowd before asking who was happy and instructing Alex to “give them their money back!”.

By this time, we had a large crowd and more people were buying, all of whom received the grooming kit and bag along with their lifetime supply of pens.

Next up was a glass vase, which I presented as “Italian Crystal” while flicking the rim to create a resounding chime as if this proved anything.

This was a £10 purchase but with everyone confident they would receive a full refund, money was soon handed to Alex in return for cheap glassware. This cash was also returned once the crowd shouted that they were “happy”.

It’s important to point out that behind me, inside the truck, were dozens of boxes marked with big brand names promising that high end electronics might be up next.

In fact, Alex reached for one of those boxes next before I openly corrected him to hand me a different box instead.

Inside this box were some impressive-looking watches in presentation cases designed to sell rather than use.

By this, I mean that they were classic “flash” designed to look as if they were worth much more than they actually cost and to barely function once removed from the impressive (but cheap) packaging.

This kind of product is made purely to over-sell and actually costs a fraction of what anyone would suspect.

In fact, everything we were selling had been secured for less than £3 for all four items (watch included) and this was without buying bulk!

So now I showed the watch and impressed upon people what a fantastic gift this would be and that clearly, these watches should sell for over £100 but today, thanks to our special promotion, we can sell these for just £20!

Alex could barely keep up with the demand as £20 notes were thrust into the air to be exchanged for deceptively cheap watches.

Once the watches were gone (we only had enough for half the demand – if we were real scammers, the truck would have been filled with them) I stood at the tailgate and promised the crowd again that we guaranteed satisfaction and guaranteed everyone would be happy.

This time, instead of returning their cash I said: “If you’re all happy, we’re all happy!”

Then I pulled down the shutter, sealing us inside; the driver popped into gear and we drove away.

From inside the truck, I could hear the crowd’s disappointment, but it wasn’t until we returned their money and interviewed the buyers that we realised the genius of this particular scam.

Had you asked me in advance what I thought the crowd might do when the truck drove away, I might have said they would be angry or would perhaps attempt to chase after the truck.

In fact, we learned a lesson that many pitch-artists already knew: that everyone loves a bargain.

The Bouncer is based on the jam auction scam but unlike the jam auction, people are generally satisfied with what they receive and once the sale is finished, rarely do they feel conned in any way.

It’s true that the crowd was manipulated to buy £3 worth of crap for £20 and it’s also true that I could have re-scaled or extended the scam to take people for a lot more.

In this variation of the jam auction, people didn’t lose too much and ended up with a bag filled with items they thought they got for free (they didn’t if you think about it) and their only complaint was that the auction finished too soon.

No one wanted to return their goods and nearly everyone was happy with their purchase, even when we told them how little it cost us.

We were blinded by our own psychological trick into believing it was automatically a con game, when in fact it’s actually a system that’s been adapted and employed by hawkers and pitch men for decades!

Speaking to members of the crowd, I later learned how important the big name boxes behind me had been to attract people and hold them with the promise of even better bargains and that when we shut up shop and drove away, the crowd was not duped – they were merely disappointed it ended so soon!

Other articles worth your time today: