How To Avoid Angle Shooters In Poker 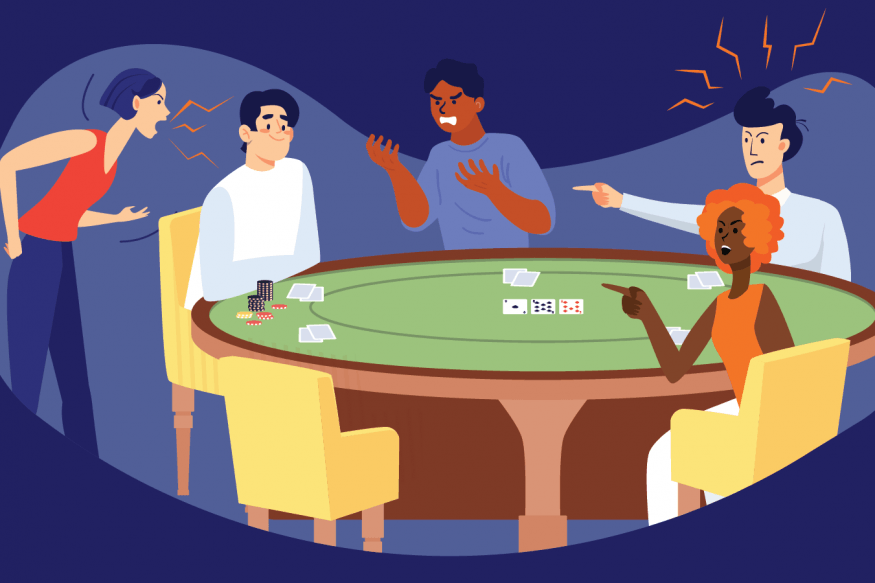 Poker is a game with a set of specific rules to provide a safe and fair environment for all players, regardless of how (in)experienced they may be. While a more skillful player will usually beat the weaker ones, they all have to play by the same set of rules.

However, due to poker being a rather complex game with many variables, the rules can’t cover every possible situation that may happen at the tables. There is a fairly large grey zone, where rules aren’t quite clear enough, opening up space for a practice known as angle shooting.

In the simplest of terms, angle shooting in poker is doing things that are questionable or unethical – but not strictly against the rules – to try and get an edge over another player.

While the practice is generally frowned upon by the community, there are still many players who’ll take their chances walking the fine edge between what is and isn’t allowed.

In this guide to angle shooting in poker, you’ll find out about some of the more common practices that belong to this group.

The main idea isn’t to teach you how to angle shoot yourself, of course, but rather to protect you from those looking to gain an unfair advantage.

Why Is Angle Shooting Bad?

Let’s start first by talking about why angle shooting is a bad idea, as there is a fair number of players who don’t see anything wrong with it. Their reasoning is: if they aren’t breaking the rules, why should they care?

The problem with this line of thinking is that poker is a game of people.

Just because something you do or don’t do is technically within the rules, it doesn’t mean it’s acceptable. In every specific life setting, there is usually a set of unwritten rules that you are expected to follow. The same goes for poker etiquette.

Intentionally skirting or straight-up breaking that code to gain a small, short-term edge won’t get you very far.

First of all, angle shooters usually aren’t looked upon kindly, and other players will try to avoid them as much as possible. This is especially true for recreational players who want to have some fun and can even prevent you from getting into some of the best games if you become known for such practice.

“It isn’t much fun if you feel like you’re being cheated, even if they’re “technically” within the rules, and the casino can’t do much about it.”

So, this type of behavior can create a toxic environment where recreational players, who are crucial for the games to run, refuse to sit down and would rather spend their time and money doing something else.

It hurts everyone, including persistent angle shooters, who have no one to blame but themselves.

Common Angle Shoots To Look Out For

With all this being said, there will always be players trying to cut corners and take advantage of unsuspecting victims.

For some players, it becomes a part of the game, and they refuse to change their behavior unless the casino staff clearly states that it won’t be allowed.

So be prepared by getting to know some of the most common angle shoots in poker:

If you’re new to poker, you may not be familiar with this term, but what “going south” means in live cash games is secretly removing chips off the table.

For example, a player wins a big $2,000 pot playing $1/$2, and they decide they don’t want to risk it all in later hands. So, they remove a few hundred from the table when no one is looking.

In most poker rooms, this isn’t allowed, but penalties for going south are usually quite mild. Another problem is that it’s hard to prove if you don’t notice it immediately.

This is one of the most common angle shoots you’ll encounter when playing live cash games as there are players out there who do it routinely.

The reason why this practice is frowned upon is that all chips that are at the table should be in play at all times, unless a player decides to get up and leave.

Sadly, calling someone out for going south can cause a lot of tension at the table and lead to some unpleasant situations. That’s why many players decide to let it go and allow others to get away with it to keep the game going and avoid drama.

Another fairly common practice both in tournaments and cash games involves hiding big denomination chips behind the lower-value stacks.

By doing this, the angle shooter fools their opponents into believing they have fewer chips than they actually have, which can significantly impact someone’s strategy.

For example, you find yourself in a hand against someone you believe only has 15 big blinds. You flop a top pair with a decent kicker, and when they bet into you, you decide to put them all in.

It’s only after they make the call that you see with horror the full stack of big chips sliding from behind. They have you covered, even.

Unfortunately, there isn’t much you can do at this point.

While the other player was supposed to keep their big denomination chips in the clear view, the usual punishment for this is a slap on the wrist for them (maybe a few hands away from the table in a tournament and pretty much nothing in a cash game).

It’s one of the reasons you’ll hear experienced players often ask someone how much they have left. It may be annoying at times, but it helps avoid these things from happening.

When something like this happens to you in a big tournament, and ends up being the reason you bust, it really feels bad.

So, be sure to protect yourself, especially against players you know have done this in the past.

In poker, information is gold, and obtaining the relevant information during a hand isn’t always easy. So, some players will go to extra lengths to try and gauge a reaction from their opponent, including bending the rules.

The pump fake is one of the most common moves from this category.

This is when the angle shooter will pick up a stack of chips and move them forward while holding them in their hand, seemingly announcing a bet or a raise. However, at the last moment, they’ll pull the stack back and put it down with the rest of their chips.

This move is treated differently at different venues.

At some places, you can’t get away with this kind of behavior, as any forward motion with your chips will be binding. However, some casinos and poker rooms aren’t as strict and won’t force the player to stick to their action.

The main goal of this move is to try and gauge a reaction. Lesser experienced players may even go ahead and fold their hands immediately when they see the big stack of chips in the opponent’s hand, which gives the angle shooter a massive advantage.

If they don’t get the desired result with their pump fake, they’ll take the bet back and reconsider.

Most casinos won’t let someone get away with this repeatedly. So, if you find yourself at a table where someone is doing this over and over again, make sure to complain to the floor.

Even if there isn’t a specific rule to address the issue, they’ll usually talk to the player and warn them that if they do it again, their action will stand.

4. Mis-Declaring A Hand At A Showdown

Once all the bets are in and there is no action left, it’s time for cards to speak.

However, some players like to do the actual speaking before letting their cards do it, and they do it to get you to muck your hand.

Say your opponent bets, you call, and they announce a “full house.” Even before they turn their hand, you throw your cards into the muck, only to see them turn over Ace-high. You’re in shock that someone would lie so blatantly at a poker table, but this isn’t all that uncommon.

If you call the floor, they can always say they were just joking. Again, they might get a notice, while you may be out of a huge pot and a lot of money.

If a player was honestly just messing about, they might let you retrieve your hand or just straight up give you the pot. But don’t count on it. Even if such behavior is bad, it’s your responsibility to protect yourself against it as much as humanly possible.

To protect yourself from this particular type of “cheating,” you should never release your hand until all cards are face up. If you’re first to show, table your hand unless you’re certain you can’t win.

Don’t believe what anyone tells you, unless it’s someone you’ve known for years and you can be certain they’d never pull such trick on you.

Someone repeatedly miss-declaring their hand at a showdown will probably run into problems, but they don’t need to do it all the time. If they pull it off in one big pot, it’s already given them a huge advantage.

It’s up to you to take matters into your own hands here; don’t count on anyone else to protect you.

5. Acting Out of Turn

This is another move aimed at getting extra information.

For example, a player may bet, and while you’re pondering what to do, you hear an angle shooter announce a call or a raise.

This sneaky trick is designed to confuse you into making a wrong decision.

Of all angle shoots out there, this is the least elaborate and effective one. It only works if they succeed in their intentions of confusing you. Otherwise, they’ve just given you an extra piece of information you can work with.

For example, in most poker rooms verbal actions are binding, even if they act out of turn and the action before them doesn’t change.

So if one player bets and you hear someone declaring a raise behind you while you’re sitting there with a strong hand, you can just make a call.

Now, the player who acted out of turn will be forced to raise, and when the action gets back to you, you can spring your trap.

What I will say is that you shouldn’t feel bad about the poor guy acting out of turn when you’re sitting there with a monster. Often, they are doing it deliberately, not by accident, so let them have a taste of their own medicine.

Being a nice guy at the table is completely fine, but don’t let others take advantage of you.

“If you’re a regular in a game and there’s a new face at the table, don’t be afraid to warn them about a known angle shooter.”

There will always be some degree of angle shooting involved in poker. With the game that revolves around outsmarting your opponents, this is pretty much inevitable.

Some behaviors are acceptable and tolerated, while others, like the ones described in this article, should be avoided at all costs.

If you spend a fair bit of time playing poker, especially in the live setting, you’re bound to run into all sorts of situations.

Hopefully, with this guide, you’ll be better prepared to handle them and avoid being taken advantage of at the tables.

Looking to play? Check out Casino.org’s list of recommended poker sites for 2020.