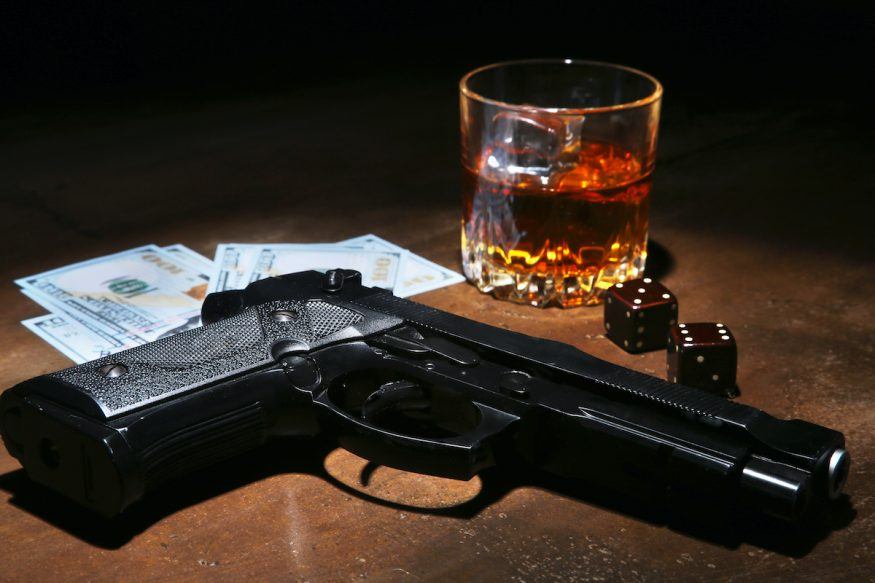 You’ll often see illegal casinos and underground gambling dens getting busted by the police in the news, and these secret spots are usually linked with crime, drugs and violence.

But where are the weirdest places on earth that these shady dealings have taken place? We’ve rounded up a list of off-the-beaten-track, illegal, or less than legitimate casinos that were all found in seriously bizarre locations.

Behind A Secret Wall At The Back Of A Cheese Shop – Alicante, Spain

We start with our favorite story. It’s the one about an illegal casino in a cheese shop. Have you heard it?

A gourmet food store in Alicante, Spain, was recently busted for hosting illegal poker games in its wine and cheese cellar.

Apparently, a display shelf on a wall led to a hidden door and a hush-hush backroom.

The police raid uncovered not just a poker den but evidence of drug trafficking, with cash and cocaine found on the premises.

Not only did it break laws on private poker games, which are illegal in Spain, it also broke coronavirus lockdown rules in one of the worst-hit nations in Europe.

As far as fronts go, though, we think a cheese shop is devilishly ingenious. Who’d have guessed?

A couple of years ago, about 30 gamblers were busted at an illegal but luxury casino right in the center of Kyiv, Ukraine’s capital city.

The location? A shopping center and office block.

The mall-based casino was for VIPs only and, according to reports, even used a secret elevator worked by a magnetic key, which transported special guests up to a fourth floor protected by a system of locks. That’s a lot of effort just to end up getting caught.

During their raid, along with gaming equipment, the police are said to have confiscated cash, weapons and ammunition.

The reason? It was operating as an illegal gambling den and failing to follow COVID-19 safety guidance, while legal casinos remained closed due to lockdown.

The lavish home apparently looked like a bed and breakfast to the untrained eye, at least upstairs.

But below, in the basement, is said to have been a hive of illicit activity in the form of an underground casino filled with games tables, slot machines and…a spa.

Yes, we’re a bit puzzled about the last part too.

As well as charging people, police seized over CA$10 million in cash, assets, firearms and alcohol.

Among the illegal items discovered were shark fins, often used to make the controversial sharks fin soup, blamed for endangering sharks across the globe. A rifle was also found in the mansion premises.

Inside A Tailors In A Strip Mall – San Diego, US

A strip mall in San Diego is the setting for our next ‘underground’ casino. Or to be more specific, a clothing alterations store with a twist.

It may have looked inconspicuous sat next to a coffee shop but KT Alterations & Gifts was reportedly far from innocent, leading to it being raided by police in October 2020.

Officers found evidence – including gaming machines – of a gambling parlor being run off the books.

The illegal casino was also caught with drugs and drug equipment, as well as around $1,700 of concealed cash in drywall.

If you’ve ever been to Italy, you’ll have noticed that café culture includes sipping coffee whilst standing up at the bar.

But did you know it’s also pretty commonplace to place a bet as you do so?

It’s usually legal for regular and licensed Italian café bars to operate sports betting, slot machines and sell lottery tickets on the side.

But during specific periods of Italy’s COVID-19 lockdown restrictions, this was prohibited.

However, gambling has reportedly continued ‘illegally’, even flourishing across the nation during this time, with critics arguing that making it forbidden only robs the state of taxes.

Perhaps Italy is the gaming destination you never knew you wanted to visit…in normal times, of course.

London is known for its glamorous, well-heeled casinos.

But there’s also said to be a thriving underground scene of ‘spiels’, illegal gambling dens in the less attractive parts of town.

Backstreets, mini-cab offices and cafés are among the places that are often said to disguise the gambling hubs in plain sight.

But they have a long history, with reports suggesting these ‘dives’ have been around since the 1920s, gaining a foothold in the criminal underworld of the UK capital.

It sounds like a plot for a Ray Winstone movie. But these gangster-filled gambling venues operate in a secret world of crime and drugs, where you’ll likely need an invite and a reputation to enter.

Often evading prosecution due to being difficult to prove and always on the move, pop-up spiels look set to stay a part of the London gaming landscape for a while yet.

If you liked this, you’ll love seeing the weird stuff you can buy in a vending machine: