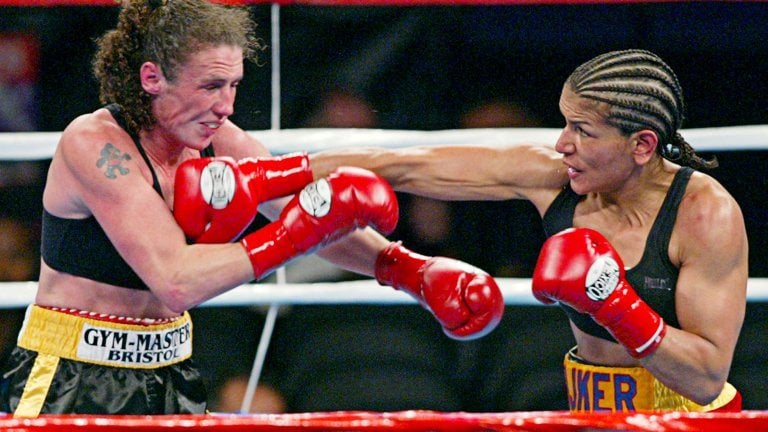 Here we take a look back and rank the pound-for-pound greatest ever female fighters in history. Let us know if you agree with our selections!

Dubbed the ‘world’s most dangerous woman’ during the height of her powers, Lucia Rijker is one of the most famous female fighters ever and secured supreme world title success at light-welterweight.

Originally a kickboxing champion, “the Dutch Destroyer” finished her sublime boxing career with an immaculate 17-0 record which included 14 knockouts and is one of only three female Hall of Fame inductees.

Widely considered to be the hardest hitting female fighter in the sport’s history, Ann Wolfe stopped 16 of 26 opponents throughout a dominant career before retiring in 2006.

When she clinched the IBA light-heavyweight crown in 2004, the American emulated the incredible achievement of the great Henry Armstrong by holding three world titles in three different weight divisions simultaneously.

It’s a surname that will be very familiar.

Laila Ali is the daughter of the greatest heavyweight in history; the legendary Muhammad Ali.

But the unbeaten American forged out her own legacy in the women’s game, ending an illustrious career with a 24-0 record and holding world titles at both super-middleweight and light-heavyweight.

One of the greatest female fighters in recent times.

She is the quickest ever two and three-weight world titlist in the paid ranks after also becoming the only American boxer (male or female) to ever earn consecutive Olympic medals in 2012 and 2016.

A modern day great and pioneer for women’s boxing, Katie Taylor has enjoyed a remarkably successful career both as an amateur and professional prize-fighter.

As Irish boxing royalty, she famously rallied to five world amateur championships and a 2012 Olympic Gold medal, among many other honours, before becoming a two-weight world champion and undisputed lightweight queen as a pro.

Known as “The First Lady” of women’s boxing, Cecilia Braekhus is a modern day pound-for-pound great after dominantly reigning as undisputed welterweight champion since 2014.

The Norwegian was the first woman in any division to hold all the alphabet titles simultaneously, the longest-reigning female champion and was named as the inaugural Female Fighter of the Year by the Boxing Writers Association of America.

Puerto Rican star Amanda Serrano is the only female to win world titles in more than four divisions, with a remarkable nine straps across seven weight classes.

The talented southpaw, known as “Real Deal”, has also been awarded Women’s Fighter of the Year by WBN on two occasions in her admirable career (2016 and 2018).

One of the key figures in raising the popularity of women’s boxing across Europe, Regina Halmich is one of the most distinguished female fighters in history.

The high-profile German reigned as world champion across all of light-flyweight, flyweight and super-flyweight before retiring in 2007 with just a single loss in 56 total bouts.

A women’s boxing trailblazer, Christy Martin was the first ever female inducted into the Hall of Fame after a prestigious 23-year career.

One of the most recognisable fighters in the sport, “The Coal Miner’s Daughter” took on all-comers in the ring and eventually hung up her gloves in 2012.

Regarded as “The Knockout”, Mia St. John claimed title honours at lightweight and light-middleweight during a long-standing career.

The Mexican-American battled in 65 ring outings across five divisions, beginning back in 1997 and not calling time until 2016.

The Rise Of Female Boxing

While female boxing has rapidly risen in popularity and its stature grown massively in recent years, the sport has a history of great combatants that paved the way for the current crop of stars.

Reports of women entering the ring go as far back as the 18th century but professional female fights were effectively outlawed and athletic commissioners refused to sanction or issue licenses until more modern times.

The first sanctioned women’s bout in the UK took place in 1998 and the Olympics finally welcomed women’s boxing officially during the 2012 London Games.

As if it took that long!