12 Sneaky Ways To Cheat At Slots 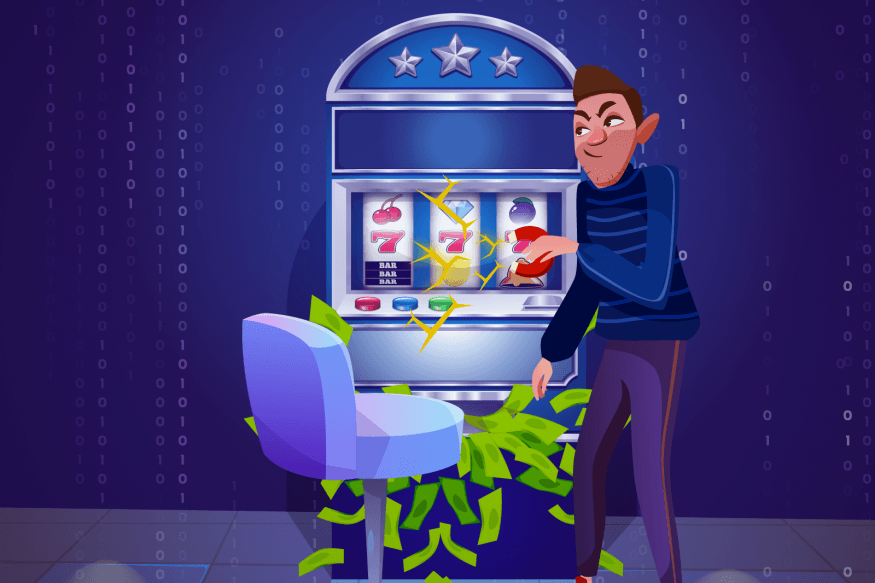 Slot machines are some of the most lucrative games on the casino floor for both the players and the house – and cheaters.

With such huge payouts available, it’s no wonder that slot machines have always been a game of cat and mouse between cheaters and the house ever since they were invented.

Let’s check out some of the naughty tricks used by slots cheaters over the years. We don’t recommend ever trying them yourself, though!

Gambling authorities are there to ensure that the gaming industry is operating correctly and fairly.

Engineers design gaming machines so that they can be monitored and audited whilst also delivering quality gameplay. But what happens when an engineer decides to rig the codes for their own advantage?

The infamous slots cheat Ronald Dale Harris – aka an engineer from The Nevada Gaming Commission – did exactly that. He sure knew how to manipulate a slot machine!

For years, he cheated machines by knowing the source codes. It wasn’t until his partner had a big win in the casino – $100,000 on a keno game in 1995 – that the scam was discovered.

As technology advanced, slot machines began to use a light sensor to register payment. In a large number of machines, the optic sensor worked separately from the physical comparator.

Basically, that meant that if a shaved coin was sent down at the same time as an object that matched the shape and size of the required stake coin, the shaved coin would be returned whilst the other object would land in the machine and start play.

Another method of slots cheating used throughout history were fake coins.

Fake coins were used by con artist Louis “The Coin” Colavecchio to scam casinos for years until his arrest in 1998.

He was released in 2006 and quickly re-started his cheating. It was a matter of months before he was unsurprisingly sussed again.

We often get asked how to cheat a slot machine with a magnet.

Let’s get one thing clear: it’s not actually possible to cheat modern day slot machines with a magnet, since they’re all programmed by computer software and aren’t magnetic.

However, people used to be able to cheat with a magnet on the older machines, when they were made of metal.

To cheat at slots using a magnet, you could spin the reels and then use a strong magnet on the outside of the machine to stop them spinning when you saw your winning combination.

Cheaters would then remove the magnet and claim the payout.

This wasn’t the most subtle cheat but, if done well, people could easily win lots of cash!

This slots cheat was all about the technique.

A string is attached to the coin, the coin is sent into the machine until it triggers the start of the game, and then the player brings the coin back up using the string.

Nowadays, this technique is all but redundant thanks to the march of technology.

It’s a real classic though and, if it worked, you would have seen a big win.

Tommy Glenn Carmichael is one of the most notorious slot cheats in gambling history. He is responsible for the light wand.

Magicians such as David Copperfield, Dynamo and David Blaine might have the ability to create the illusion of something happening but Carmichael would use his light wand to make jackpot wins magically appear out of thin air.

The light wand would effectively blind the optical sensor on slot machines so it couldn’t work out how many coins had been deposited into the machine, meaning it wouldn’t know when to pay out or how much.

This meant Carmichael could manipulate a slot machine to his advantage, by turning small wins into massive payouts.

This is an oldie but a goody in the world of slots cheats.

A group of men worked together at the Caesars Boardwalk Regency casino in Atlantic City back in 1982. One man opened the targeted slot machine and attached 20-inch long piano wires to the whirring guts of the game.

The wires could then be used to jam the clock that measured the wheel rotations, allowing the group to manipulate the spins.

They hit the $50,000 jackpot but, unfortunately, their whole scam had been filmed and the winning player was arrested before he left the premises.

This is one of the most cunning methods of cheating at slots and was popular with scammers in the 1970s and 1980s.

They used a special tool that was split into two parts. A top (a metal rod with its end bent in the shape of a “q”) and a bottom (a long wire).

It’s that man Carmichael again. He was a total genius, in cheating terms.

He was the creator of the “monkey paw”. After testing out new methods on a video poker machine, he eventually built the correct contraption. It was amazingly simple.

He got a guitar string and attached it to a bent metal rod. He would thrust it into the machine’s air vent and wriggle it around until he clicked the trigger switch for the coin hopper.

Cue the avalanche of coins.

This is a little device that is wrapped around a bill to fool the slot machine into thinking it is accepting a $100 bill when in reality it is just accepting a humble $1 bill.

Dennis Nikrasch changed the slots cheating game with this idea.

He bought a slot machine and messed about with it in his garage to figure out its flaws.

He worked out the computer chips inside the machines could be re-programmed to be manipulated to pay out jackpots on tap.

Nikrasch ordered a load of these chips, hired a team of scammers, got hold of a bunch of slot machine keys and started a reign of scamming that would bleed casinos dry for years.

And he did it all just by switching the independent chips for his manipulated chips.

Software glitches have been manipulated by cheats for decades.

By playing a certain pattern of stakes and games, players could confuse the machine and trigger a glitch that pays out the jackpot.

Many slots cheats benefited from this over the years but now many jackpot winners are also being denied their winnings because of it.

The most famous incident happened in 2015 when 90-year-old grandmother Pauline McKee, from Illinois, won $41 million on a Miss Kitty slot machine at the Isle Casino Hotel Waterloo.

She tried to sue the casino initially in 2012 but her final appeal was rejected three years later. Unfortunately, historical instances are the reason for the casino winning this case.