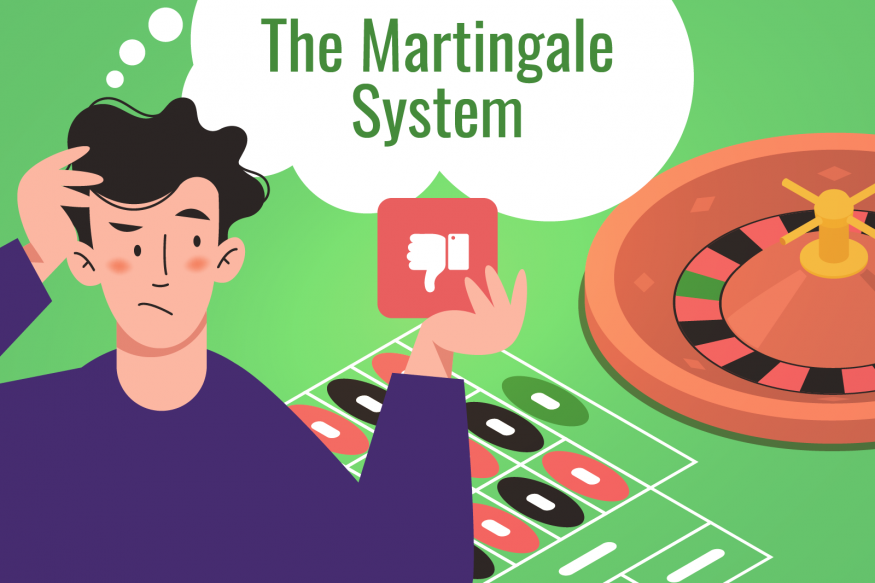 Gamblers love the idea of luck or fate and are often suckered by the notion of a system that can defeat the casino and beat the house at their own game.

Sadly, these tend to either require a lot of work or are nothing more than fantasies based on bad math and wishful thinking.

How The Martingale Works

If you’re reading this, I’m sure you’re already familiar with the system we’re about to discuss and chances are you have an inner gambler who is convinced the system has merit for reasons I’m about to get into but first, let’s define the difference – for this article – between a gambler and a player.

Gamblers love systems like the Martingale because, frankly, they can be fun. Players, on the other hand, recognize the obvious (to them) flaws in this kind of strategy.

So here are the basics to the Martingale System:

You choose a 50/50 proposition such as red or black on a roulette table and place your initial stake on red, and if you win, you collect your winnings and repeat the bet.

If you lose, you simply double your bet for the next spin so that if you win, you recoup your losses and have a profit equal to your initial stake.

Let’s say that again because we’ll be coming back to it in a moment:

If you lose your initial stake, you double that bet and if you win, you get back everything that you lost PLUS a profit equal to your initial bet.

A “profit” equal to your “initial bet.”

That’s what you win no matter how many times you double your bet to chase your losses, all you will ever win is equal to that first (lowest) bet.

An Example To Demonstrate

So let’s play this out.

In fact, thanks to the fickle hand of fate, you are going to lose the next 21 spins BUT you are going to win the 22nd spin, so I guarantee that if you keep playing you will eventually see the ball land in red.

So let’s keep doubling until we hit that red.

So we just bet $1,048,576 and all we need to bet on that guaranteed 22nd spin is a little less than $2.1 million dollars and we win back everything we just lost PLUS we will be ONE DOLLAR in profit.

That’s what we just won for risking around $4.2 million dollars of our own money (roughly the sum of everything we lost plus our last bet, which we won).

Gamblers will no doubt state the chances of 21 spins without a single red appearing is extremely unlikely and I agree that it doesn’t happen often but it really does happen.

And when it does it might keep happening until you either run out of money or you run into the table limit which forbids you from doubling any more bets.

In fact, players are probably already screaming this at their screen.

No one has a limitless bankroll and if they did, no casino will let them play without a table limit to protect the house but even in the above scenario, the house only loses one dollar whenever your lucky red number finally comes up.

So why is it such a compelling idea for a system and why do people still play it?

I guess it’s fun, especially if the spread of reds and blacks is relatively “normal” since most players will win in a couple of spins and return to their initial bet.

In these scenarios, the Martingale brings seemingly guaranteed rewards until a string of losing results ultimately breaks the player’s bankroll.

And that will always happen eventually because – and I know this is going to be hard for many gamblers to believe – roulette wheels do not have a memory.

Every spin is independent of every other spin and the chances of a red or a black number coming up remains the same for each individual spin no matter how many reds or blacks preceded that spin.

The gambler can’t accept this and simply points to the long list of blacks and zeros (more about those in a moment) and believes that a red number must eventually appear and the more non-red numbers that preceded a spin must greatly improve the chances that the next number will be red.

Except – maddeningly – this is false, but the gambler’s brain often refuses to accept that.

A Stupid Way To Win

I once sat in a casino in Europe where we could monitor all the LED number displays waiting for a run of six red or black numbers before signaling players to hit the table and bet on the opposite color.

Amazingly, this tactic paid a healthy profit until we hit a period of persistent losses that would have deleted our profits had we not pulled back our bets in time.

For months afterward I would watch those same LED displays from the poker room and record how many times a run of six became a run of seven and the answer was about half the time, immediately recognizing how stupid that entire strategy would have been in the long run.

Of course, that red/black bet was never a 50/50 proposition since there is a green zero on the wheel that keeps the odds against the player; and in the US there are two zeros, making their wheels even less attractive over time.

Sure, we won a little, but the method was flawed and had we been overly distracted by our initial success we might have followed subsequent losses into an inevitable black hole.

We made a lot more (though small beans compared to well-funded teams) by identifying biased wheels, which I’ll discuss another time.

There are of course variations on the Martingale strategy that seek to improve chances and returns while supposedly addressing the weaknesses just described, but all of these are failing to defeat the casino’s mathematical advantage.

One such variation is the “Split Martingale” also known as “Labouchere,” or the now infamous “Reverse Labouchere.”

If you want to know more about the Reverse Labouchere system, it’s accompanied by a fantastic story of a little guy breaking the bank in Monte Carlo that I covered in one of my previous articles.

Can You Use Chaos Theory To Beat The House?