How to Play Keno

Your comprensive guide to casino keno

Our casino gaming experts explain how to play and win at keno, the lottery game of chance. Sharpen your keno skills and start winning big.

Keno is a lottery-style game originating from China. Keno rules are very similar to games like Lotto. It involves picking numbers and hoping they match some of the numbers drawn at random. 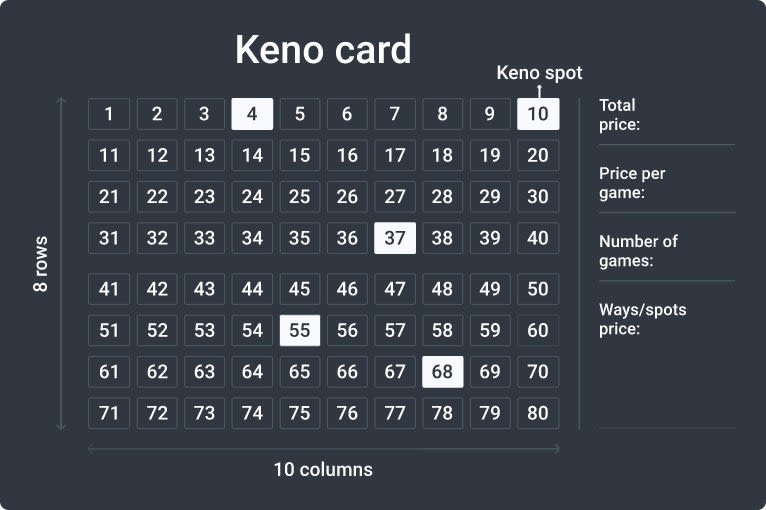 Key term – What is a keno spot?

The numbers picked by players are known as the spots. Traditionally, players mark these with ink or a crayon (like a bingo dabber). In video keno, and online keno casino games, players select keno spots by clicking the mouse or by tapping on mobile.

A little confusingly, Spot Keno is also the name given to the classic, simple version of the game. It has no quirks like additional balls, multipliers or combinations.

1. A keno card displays 80 numbers, from which players select their choices before each draw takes place.

2. An individual number is called a keno spot. 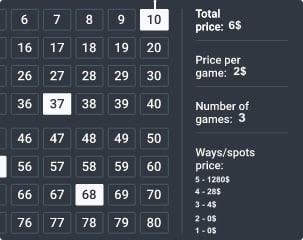 3. When choosing numbers, a keno payout table appears. This shows players how much they stand to win if they match a certain amount of numbers. 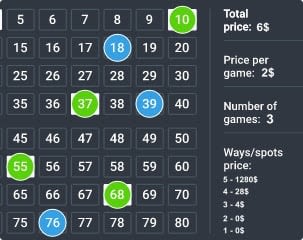 4. The more matching numbers, the greater the payout. Many variants also reward matching zero numbers when players pick above a certain amount. 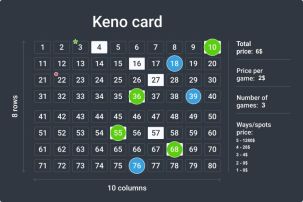 6. At the start of the game, all numbers drawn will appear somewhere on the screen.

7. When a number the player has chosen is drawn, this is called a match or a catch.

8. During the draw, any numbers a player has successfully matched will typically be highlighted in some way.

9. There are different types of bets available in some keno casino games, which we'll cover in more detail later in our guide.

How to pick keno numbers

No matter how you choose to pick numbers, don’t forget that it’s purely a game of luck. There are however two ways of making a selection and we explain the process for each.

Manual: pick your own

Compare key benefits and disadvantages between playing at a keno casino online and at a land-based casino.

How the keno draw works

As soon as a player hits Draw, the action happens swiftly. This button may be labelled Play or Start, depending on the keno game. Here’s what to expect before, during and after the draw.

Players choose their numbers, as well as how much they want to bet. 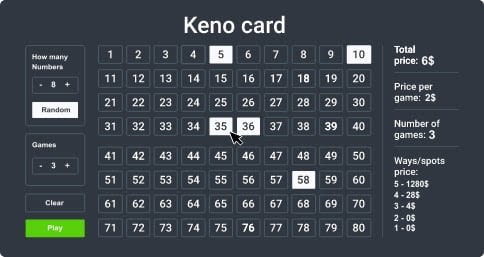 Some games offer side bets like multipliers to boost winnings (or which may be awarded for certain matches). At this stage players may click the option to play any multiplier or other side bet available.

The draw begins, and the player’s selected numbers start to appear on the screen. 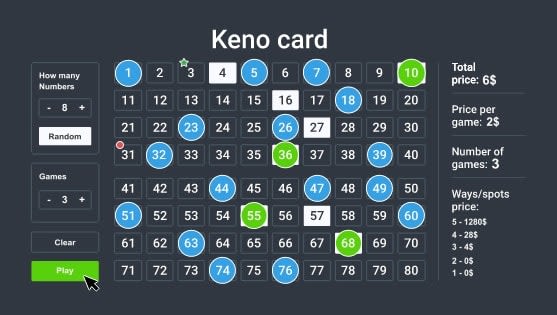 Depending on how many matches the player gets, it’s time to collect winnings. 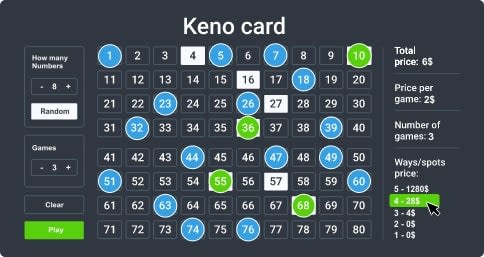 Players can now repeat this process by using the same set of numbers, selecting a new set of numbers or allowing the game to pick numbers randomly. 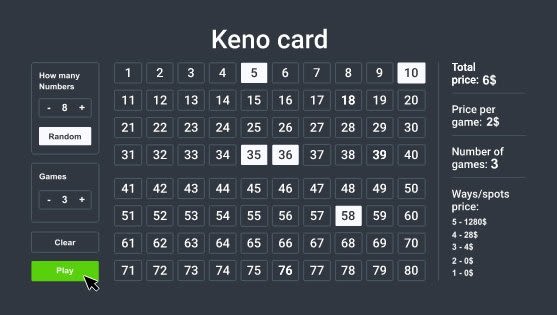 What is the difference between keno and bingo?

Players new to keno often assume that it’s very similar to bingo. In fact, keno strategy has a lot more in common with picking lottery numbers than bingo. Bingo and keno are almost opposite to each other.

Players are issued a ticket with numbers on it. During the draw, they dab any of their numbers that appear in the hopes of creating a winning card.

Players pick numbers for themselves. As in bingo, it’s then their responsibility to keep track of which of their numbers are drawn.

Although the games are similar in their number card and the draw, keno involves more player participation and decision-making. It allows manual number selection, which bingo does not.

Now you’ve read our expert guide to playing keno, are you ready to start winning with the best keno numbers for you? Your lucky numbers might be related to special occasions, or based on keno numbers that hit the most. Either way, you're now prepared with the keno skills you need to play at a top casino! Our experts have shortlisted 2022's best real money keno casinos, with great bonuses.

How do you play keno and win?

Quite simply, the more numbers you match in real money keno, the more cash you stand to win. Payouts vary hugely depending on your game type and bet types. Don't chase your losses though – it's the luck of the draw.

What are the odds of winning keno?

The odds of any specific ball being drawn are always 1 in 80, as keno has 80 numbers in total. Keno odds and payouts range massively depending on how many numbers you pick. When looking at different keno payout charts, you might be surprised by how large the range of potential winnings is.

How many numbers do you need to bet on to play keno?

Many players find their keno winning sweet spot somewhere around the 6 to 10 number mark. Most keno variations let you pick anywhere between 1 and 15 numbers. Aside from numbers, there may also be minimum betting amounts, depending on the casino. Find out more about potential payment methods.

Can you play keno online on your phone?

Yes, you can play keno on many mobile devices and tablets. Not every online casino offers mobile keno, but plenty do. It can get fiddly choosing numbers from a board of 80 on smaller screens. However, many casino sites and apps offer innovative ways to easily pick your keno numbers.

What are the best keno number combinations?

Players on the hunt for keno winning numbers often choose those with a fair amount of space between them. There’s no science to this, as every number between 1 and 80 is statistically as likely to appear as any other. However, that just doesn’t 'feel' like the case for many regular players…

What is the best keno strategy?

The best keno strategy is to go with whatever bet type and number-choosing method which feels best for you personally. A player who studies hot numbers and keno payout charts is no more likely to win than a player choosing at random.