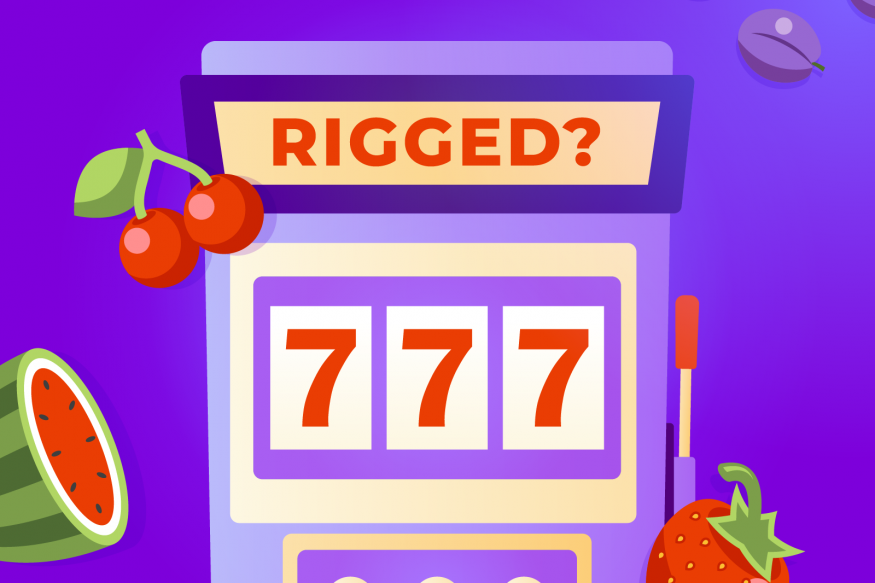 As a casino worker, one of the questions that you’ll need to resign yourself to hearing every day is: “Are these slots rigged?”

And the answer is, “Well, yes, but actually no.”

All slot machines will have a house advantage. This number is normally best defined as return to player (RTP). As the name suggests, it shows how much of each dollar wagered is returned to the player on average.

So perhaps the better question is how rigged are they?

Of course, the player is really asking if the machines are set to pay back some egregious amount on every dollar – or perhaps not pay back at all.

And the answer there is of course a resounding “no”.

Why Casinos Don’t Rig Their Machines

Casinos already basically have a license to print money issued either from the state or country they’re operating in.

Many of these licensing agencies will have a minimum RTP or payback amount that casinos will not be allowed to go under.

Not only would a casino with machines set below state minimum paybacks face huge fines or even losing their license, but they would face a huge reputational risk with the gambling public.

No one is going to want to play with a casino that has been cheating its players.

All the revenue in casinos is closely monitored by state or tribal agencies to make sure that they get their fair share in taxes; any odd variations in revenue outside what is expected will have regulators inspecting slot machines and their CPUs for irregularities.

Most of these jurisdictions publish a monthly breakdown of RTP, often by region and in some cases by the individual casino.

In these cases, a savvy slot player can get a glimpse of not only the variations in payout by different properties but even the different RTPs by bet denomination inside those properties.

While not every state or tribal venue will have a minimum RTP amount, two other factors also keep operators in these locations from setting their machines too tight.

The first is the psychology of gambling.

Players expect a certain amount of time on a machine, they expect entertainment for their gambling dollar.

A casino that doesn’t let its players win sometimes is a casino that won’t be open for long.

A good casino operator – whether limited by the law or not – will know that the longer they keep slot players in those chairs the more money they will make and the happier the customers will be.

And this goes hand in hand with the other limiting factor which is free market competition.

If a player feels they’re not getting the best value for their slot machine budget, they will vote with their feet and move to a venue that provides a better RTP.

Even casinos with little competition in their local market may lose player spend to Las Vegas or larger regional markets if they price their payback too tight.

Nevada, which has fierce competition, has RTP rates between 90% and 94%.

Maine, which is somewhat isolated and only has two casinos, with long drives to other casino markets, has RTP rates of 89% to 94%.

This shows that even somewhat isolated markets still must price accordingly.

The other rigged slot machine question I often hear revolves around a sort of urban myth.

It’s long been believed in the slot machine community that machines in certain areas are set at a much different payback than in others.

For example, many slot players swear that machines by the front entrance or the casino cage pay better because the casino wants gamblers to see and hear people winning.

And the corollary is that machines by table games or the buffet line will have worse RTP numbers because the casino expects to be able to attract more casual players who are just playing for a few minutes.

In fact, if you talk to a dozen different serious slot players, you’re going to get 12 different PhD theses on slot machine placement and payback percentages.

But what’s the truth?

While there is not a lot of historical detail, there is no doubt that casino managers from 50 years ago placed slot machines at various payout levels, in different locations, depending on their own beliefs in what would lead to higher volume and higher hold percentage play.

But these early slots prognosticators were often dealing with only 100 machines or so; now even an average-sized casino has over 1,000. And, in some cases, as many as 4,000.

Most of these machines are ordered in large quantities, and while they may offer various pay tables, most will simply be set by the casino at the same payout as all the rest.

Not 1% higher for the end cap games and 1% lower for those in the middle of the aisle.

In speaking with slot directors today, most are far too busy to worry about individual machine placement based on even a few percent difference in RTP.

They may place certain banks of slots in certain high-visibility areas, but this is much more likely to be based on the volume of play rather than house advantage.

They will have a target RTP number for let’s say, all penny slots, and will order the machines with those pay tables that will help them meet that number.

Regulation also plays a role here. In some of the jurisdictions where I talked with slot managers, their penny games were already set at state minimum, in this case, 86% return to player.

They literally didn’t have a penny denomination game in the house that paid very much more than that.

They couldn’t very well alter machine location based on payback when almost all of them were within a percent or two of the rest.

This tight grouping of average payback percentages also indicates that there is little need to place machines in locations based solely on the house advantage.

All that being said, there are hundreds of slot directors just in the US. Every one of them will take a different approach to their slot floor.

Certainly, there are some that will feel placing dollar slots with higher payback, or even more likely high, high hit rates but lower jackpots near the front door makes economic sense.

But for the average gambler, the odds of there being enough of a percent difference in machines at different locations for them to even notice is a long shot bet.

It’s probably best to worry more about whether the ticket redemption machine is going to force you to wait in line for 30 minutes to get your change.

That truly does seem rigged.