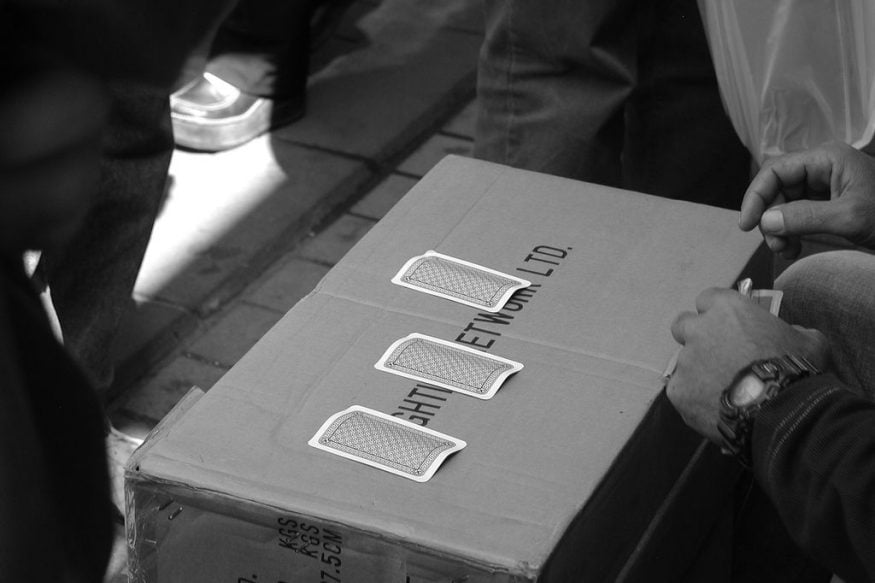 You may have seen it played on the street or in a bar with three bent playing cards, leather disks or even bar mats. But while the mechanics are usually the same, the real secret of three card monte trick is in how people are manipulated rather than the props on the table.

The Basics of the Monte Scam

Most exposes of Monte concentrate solely on the mechanics of the game, namely “the hype”: a simple sleight that allows the operator to throw either of two cards held in one hand. The illusion created is that only the bottom card is ever thrown, but the top can be dropped in an identical manner to change the outcome.

When watching an expert throw Monte, people unaware of this technique always end up following the wrong card, which is switched for the money card during the fake throw.

But the hype is not the only sleight at the operator’s disposal.

The back-flip allows him to apparently toss a card face up, switching it in the process, instantly restoring the money card to its supposed position, quick as a flash.

The dog-ear scam seals the deal when one of the players secretly bends the money card so the sucker is able to easily follow that card and finally make a bet; usually for his or her entire bankroll.

Little do they know that the operator can unbend that card in a split second while switching it for another card with an identical bend at the corner. Nor do they seem to realise that the helpful stranger who threw that bend was in on the scam.

All of this is taught in almost every explanation of “how Monte works” and for sure, these methods are an accurate description of what is happening on the table. But it’s what’s going on inside the suckers’ heads that makes this con game work, even when a player already knows the secret move.

If an operator spots someone who is wise to the method, it’s still easy to beat them since the fake throw looks exactly like a fair throw; the cheater just stops cheating! The victim assumes he makes a fake throw or switches the bent card when in fact, everything was fair.

The result is a smart-ass who refuses to bet on the bent card and loses all his money when that was the very card he was looking for!

I’ve seen this happen and it baffles other onlookers and serves to draw them closer to the game, convinced they can do better.

“A Bit of Fun”? You Will Never Win Against a Good Monte Crew

In The Expert at the Card Table, the author describes this game and the techniques used to manipulate the outcome as a bit of fun or an honest game of skill between the player and the operator; as if the fake throw, bent card and other deceptions were just part of some cat and mouse game.

In fact, no self-respecting Monte crew has ever paid off a legitimate player since the object of the game is not to offer a fair gambling proposition but to fleece, rip-off and rob anyone unfortunate enough to stumble into their web.

It’s hardly a fair game since any crowd watching it being played is filled with shills. Shills are the accomplices: people paid to help manipulate victims by betting at pre-arranged moments in a bid to encourage people to take part.

It’s not even a game since you have zero chance of winning unless they need to blow you off to concentrate on bigger fish, but even that would take a miracle to pry so much as one dollar from a Monte crews’ pocket.

The Terrible Trio – Three Tricks Used to Manipulate Your Mind

There are three elements used to manipulate players in a game of Three Card Monte: knowledge, arrogance and deception.

Female members of the crew are well-practiced manipulators who lean into any player (male or female) to whisper in their ear and convince them the game can be beaten.

They’ve even been known to tell victims exactly how the operator cheats! This is often an overt flirtation that sets the target on edge (for other reasons) and is a well-proven tactic for causing people to make bad decisions.

Pre-existing knowledge of the mechanics of Monte is usually written all over a player’s face. Smart operators play these know-it-alls with greater ease and success than a first-time rube, switching their strategy to accommodate any attempt to beat the game. As previously stated, they can simply stop cheating and let the sucker point his money at the wrong card!

Watching someone make bets on the wrong card is a sure-fire magnet for fresh suckers eager to prove they can get the money since, while spectating, they always knew where the money card was supposed to be.

This tactic is often engineered with shills who constantly bet on the wrong card, driving other people crazy until they decide to step up and play.

People are quick to assume they are smarter than people playing games on the street and the crew often dress and act in a way that convinces certain people they can easily be out-played, or are not as intelligent as the sucker with a pocket full of cash. One Monte operator told me it was almost too easy to take advantage of anyone who looks down on people different from themselves.

Over-betting is another common strategy used to frustrate a player who seeks to try a smaller bet to test the game. When this happens, one of the shills bets more and the operator insists he can only take one bet at a time and has to take the bigger bet.

Naturally, the shill bets on the wrong card, while the sucker’s card proves to be a winner. Eventually, he or she “pops” and throws down a huge bet (usually when the bent card is employed) which is quickly lost and the game disappears along with the victims’ money.

I’ve even seen one of the female shills reach into a sucker’s wallet and pull out all of their cash for the final bet!

The real secret to Three Card Monte is that our human nature is being manipulated by con artists leaning on two hundred years of proven strategies that work as well today as they did in the Old West.

Three Card Monte has never been a game. It’s a theatrical mugging that people actually line up to play!

I call us “suckers” or “fish” because that’s what we are to anyone who operates a scam like this. They see people like us as the next ripe apple, waiting to get picked.

It’s easy to dismiss anyone who’s fallen into this kind of trap and it’s true that players are foolish for getting involved. But once you stop and look, you’re entering a complex, well-practiced scenario that’s laser-focused to target your common sense and inhibition.

Some years ago, Alex Conran and I were invited to do a piece for BBC’s Watchdog on one of their live shows. Prior to the show we were given no rehearsal or camera direction so when we were live on the air, we missed most of the cues and had to be directed to the right cameras.

In fact, the director and producer in charge of our spot had dropped the ball but Alex and I were left holding the blame when the host of the show asked if we suffered from stage fright.

Alex is a classically trained actor and I’ve performed complex sleight of hand on stage while talking to thousands of people in another language, so we were naturally pretty annoyed at the whole situation.

Still seething, I was later asked to share a car home with the host and drop her off on the way before going to my own apartment. In the car, I mentioned that I’d like to do a piece for the show about Three Card Monte, which was having a resurgence in London at the time.

She wasn’t interested because, as she told me, “only idiots fall for that kind of scam”.

I was appalled that someone famous for protecting the public from dishonest companies, crooked tradesmen and other mundane forms of fraud would be so dismissive of a con game that manipulates people so perfectly.

To my mind, it’s a perfect example of a confidence trick in action and I’ve seen smarter people than that host get suckered-in by a well-coordinated Monte team.

It’s all too easy to blame the victim for being stupid without taking into account the long-proven methods used to draw people in, convince them they can win, and make them want to play.

All con games and acts of fraud depend on one side to wilfully promise something they cannot or will not deliver and it seems churlish to dismiss victims without an ounce of empathy.