How Many Kids Has Philip Rivers Got? 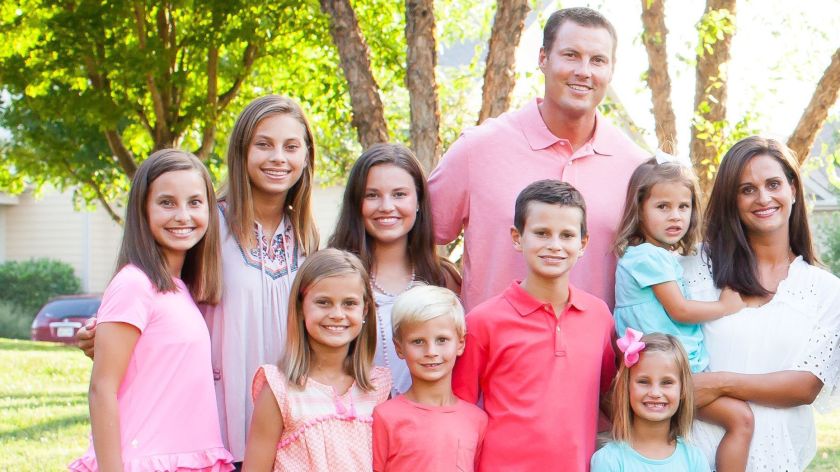 Philip Rivers has such a big family that in November 2019, the bookies were offering odds on his future.

Would he retire from the NFL, or have another baby first?

Well, as we all know, Rivers left the NFL in January 2021, after playing 16 seasons for the Chargers and one for the Colts.

But has he ruled out having any more kids?

The former NFL star and his wife, Tiffany, have never put a number on how many they want so there could be even more on the way…

That’s seven girls and two boys, ranging in ages from three to 20 years:

During his playing days, Rivers went to extreme lengths to create time to see his kids, including converting the back of his car into a mobile film room.

This meant he could watch film on his two-hour commute home and still make it back for family dinner time.

Now that he’s retired, he fortunately gets to spend a lot more time with his whole family at their home in Alabama.

He is currently a coach at St. Michael Catholic High School, where one of his children, Gunner, plays quarterback.

The most recent addition to this family is little Anna, born in March 2019.

As the ninth little one of their crew, there were jokes on Twitter that, if they included mom and dad, the Rivers could field a whole offense!

With an ever-growing family of beautiful kids we’re all dying to know how Philip Rivers met his beloved wife, Tiffany.

They started dating in middle school and ended up marrying whilst at college at NC State.

Philip was just 19 years old, and Tiffany converted to his faith, Catholicism, the night before their big day.

Their first child, Halle, was born the summer before Philip’s senior year of college.

Both Philip and Tiffany are devout Catholics; the church and their faith having only deepened their bond.

And it’s their refusal to use contraception, opting instead to use the Natural Family Planning technique that probably has a lot to do with their large family.

The Future Is Bright

Being a father to nine children and the head coach of a football team means that, even in retirement, Philip Rivers is kept busy.

However, being busy has never stopped the Rivers from having children in the past.

So, don’t rule out the possibility of baby number 10 being announced sometime soon.