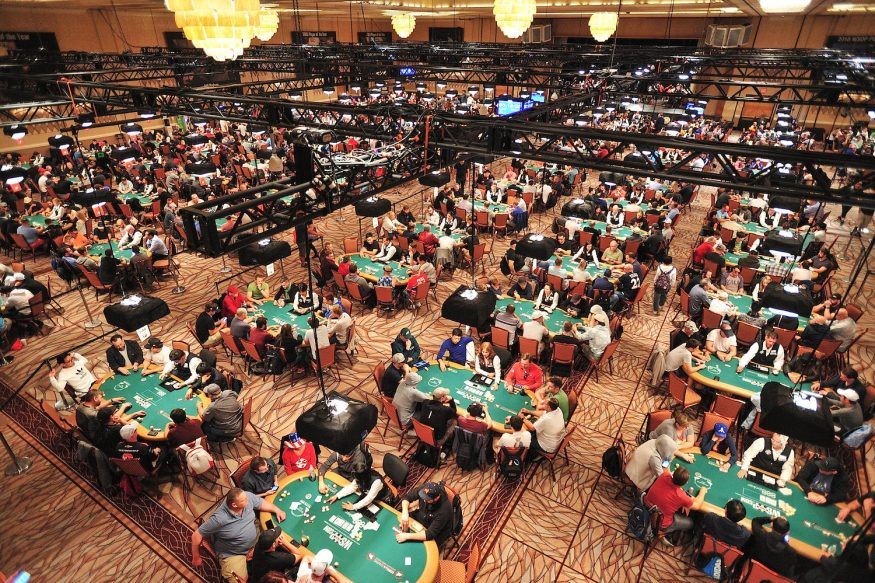 One of the best things about poker is that it’s a game available to everyone. Regardless of your age, profession, or sex, you can learn to play poker and enjoy it online and live without any real obstacles.

At least, that’s how things are in theory, but poker is largely dominated by male players.

If you look at any open poker tournament, you’ll see that the ratio of men to women is easily 20 to 1 at best.

You can also clearly see this tendency when looking at the All-Time Poker Money List. Vanessa Selbst is the only female player to make it to the top 100, surrounded by 99 guys.

Given the fact there is nothing in the game rules to discriminate against female players, it’s only natural to wonder why there aren’t more women in poker?

Do women not find the game interesting enough, or is there some deeper explanation for this phenomenon?

The answer to this question is fairly complex, but I’ll do my best to break it down it today.

Poker Was Strictly A “Man’s Game” For Many Years

The first thing to look at when discussing this issue is the history of the game.

Poker started as a male-dominated activity, and during the early days of the game, it was played almost exclusively by men. Rare female players to hit the felt were definitely going against the social norms of the period.

Those who decided to break the unwritten (and sometimes even written) rules were branded with not-so-favorable labels by their contemporaries.

So, from the get-go, there was this aura of exclusivity surrounding the game.

Poker was a boy’s game, and girls, even if tolerated, were usually not welcome. Their presence would disrupt the usual setup, and we can only guess that it could make men feel awkward or uncomfortable at that time?

Of course, things have changed quite a bit over the decades, and we’re no longer living in the Wild West era, but the fact remains that the game started off on the wrong foot for the inclusion of women.

There is no surprise that some men have no inhibitions, especially when they’ve had a few drinks or when they go on tilt.

From unsolicited seduction attempts and sleazy comments, to straight-up insults, female players have to deal with a lot of unacceptable stuff.

You could say that’s all a part of the game – but is it really?

It’s one thing to try to throw off and confuse your opponents, but guys sometimes take it too far.

And we’re still wondering why there aren’t more women in poker?

If you find yourself in an environment where you don’t feel welcomed or creeped on, where’s the motivation to keep coming back?

Most people who play poker aren’t exactly professionals who make a living out of it, so it’s the overall experience that attracts people to the tables.

When you’re a woman in poker and have to repeatedly deal with these unpleasant situations, what it can affect the overall experience.

You’re won’t enjoy yourself, you don’t feel welcome, and at the end of a session, even if you end up winning, you’ll go home with a bitter taste in your mouth.

I’m not saying that this is the rule and that it happens all the time, but it’s quite common.

Many prominent female players, like Selbst, Liv Boeree, and Vanessa Rousso, have talked about these issues on more than one occasion.

And, if it happens at the highest level, why would it be any different in smaller local cardrooms?

This is probably one of the biggest reasons why women even today tend to stay away from poker and find different hobbies to enjoy.

As fascinating as the game is, for some, it’s not worth all the additional abuse that comes with playing in a live setting.

What About Online Poker?

Long gone are the days when you had to drive to the nearest casino or cardroom just so you could play a few hands.

There are countless online poker sites out there, and they don’t discriminate in any way. As long as you’re of legal age, you’re welcome to sign up and play.

Whether you are a woman or a man makes no difference whatsoever.

Plus, your identity is hidden behind an alias, so other players at the table won’t even know your gender if you prefer to keep it hidden.

So, with that in mind, is the number of women in online poker any bigger?

Although there are no real studies to refer to in this regard, it’s safe to assume that many more women play the game online in a safe and protected environment.

The ratio is still heavily in favor of male players, but the situation is much better than in the live scene.

But even so, there isn’t the same level of interest for the game among female players, which indicates that there is more to it than just the fact that women sometimes don’t feel comfortable at the tables.

In the grand scheme of things, poker, just like anything else, is a product. It wasn’t by accident the game has become so popular across the globe.

The 2003 Moneymaker victory was a great catalyst, but if it weren’t for heaps of money spent on advertising, the poker boom would be much smaller.

But a huge percentage of that advertising was targeting a male audience.

Women were rarely featured in poker ads back in the days, and not much has changed since.

Of course, we do have more women in poker who are signing sponsorship deals and representing poker sites, but we don’t see too many female poker players in the focus of advertising, as sad as it is.

That said, this approach does make some sense from a business perspective as it’s much easier and more cost-effective for poker sites.

You can’t target and reach everyone, so rooms pick their ideal customers and adjust ads to them.

It continues the idea of poker as a “boy’s game” and something to do to get away from your everyday life.

Also, in most countries, men generally have access to more disposable income, and more importantly, they are probably more keen to put that money on the line in the game.

If it’s advertising that sells, then it’s really doing a poor job of selling poker to women. If anything, it’s almost telling them to stay away and do something else instead.

Things have changed for the better as of late, which is why there is an increase in the number of female players.

Poker sites now sign more female players as ambassadors and we do have quite a few female players creating poker content, but there is still much work to be done.

Psychology Of The Game

Another big reason women aren’t so attracted to poker, even online, is the game’s very nature.

At the end of the day, poker is a very cutthroat game where you need to do whatever it takes to outsmart your opponent and take their money.

It’s all fun and games on TV, but the look on someone’s face after a particularly painful bad beat isn’t always easy to see.

Women and men are widely considered to differ in terms of their emotions. Although things are never so clear-cut and this statement is pretty reductive, in general, men will find much more satisfaction in crushing their opponent’s soul than women.

Despite being predominantly a skill game, poker still has an element of gambling.

Gambling means risk, and most men are much more so inclined when it comes to taking risks.

Many studies have shown that women are more risk-averse, which isn’t the best thing if you want to play poker.

Texas Hold’em, the most popular poker variation, is a game of incomplete information. No matter how good or observant you are, taking some chances comes with the territory.

Players who have done really well have generally been the ones who weren’t trying to avoid variance but have rather embraced it.

Of course, this isn’t a thing set in stone, and there are plenty of women who aren’t afraid or reluctant to take necessary risks, but we have to speculate if we want to find the reasons behind this diversification.

This goes back to the overall appeal of poker to women.

If a player isn’t comfortable with what’s one of the fundamental premises of the game, they’re not going to enjoy it as much and will not find as much enjoyment in playing it.

Are There Any Advantages To Being A Woman In Poker Today?

As hard as it often is for women to find their place in the male-dominated poker world, those who do make it often find themselves in a rather favorable situation.

With so few female players, especially those playing in a serious capacity, there are plenty of opportunities to be had.

Successful women in poker usually have no problems getting sponsorship deals and endorsements from related companies. So, in this regard, female players do have it somewhat easier.

I love how Marley Cordeiro illustrates this with a bit of irony:

For men, the competition is very fierce, and getting a good sponsorship deal is usually reserved only for the best of the best – or the lucky few who manage to luckbox their way into a major tournament win.

This isn’t supposed in any way to justify different types of issues women in poker have to deal with on a daily basis, but it’s at least one bright point in the whole discourse.

Summary: Will There Be More Women in Poker in the Future?

Over the past couple of years, there’s been a lot of focus on trying to attract more women to poker.

A large portion of the poker industry understands that this is very important, as it will help boost the overall player pool and paint the game in a different, better light.

Sadly, there is still a long road ahead and many obstacles to overcome before women could see poker as “their” game.

A couple of bad experiences can be enough to turn anyone off, and, unfortunately, women are much likelier to have such experiences at a poker table.

A different approach to marketing and campaigns led by successful female pros would certainly go a long way towards achieving this goal, so let’s hope we will see this sooner than later.