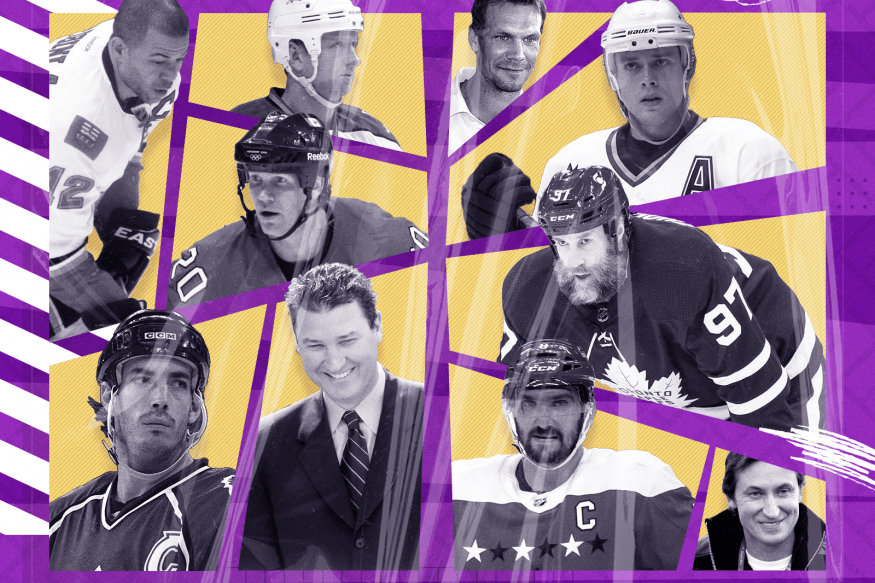 Most hockey players have had a hard time keeping up with the Joneses financially.

Sure, there was a time — before the NHL instituted a salary cap in 2005 — where players commanded huge sums of money.

Many even cashed in on endorsement deals when hockey was at its peak popularity in the United States in the 1990s.

But the NHL has been less inclined to market players after the full-season lockout of 2004-05, and in the post-cap world, salaries have been less eye-popping than in the free-spending days of the late-1990s and early-2000s.

Still, there are some who have cashed in in the post-cap world. But most of the richest hockey players have some playing tie to BC — before cap.

Here are the 10 richest hockey players ever in terms of net worth.

The Skinny: Raymond Bourque’s Stanley Cup win in 2001 gets remembered, but Rob Blake was arguably the player that put the Avalanche over the top that year when he was acquired from Los Angeles.

Blake is a member of the Triple Gold club — winning the Stanley Cup, Olympic gold and the World Championship as a player — and has been in the Kings front office since 2013.

The Skinny: Iginla was one of the fiercest competitors in hockey throughout his career, who also unsuccessfully chased the Stanley Cup and played in the free-spending pre-salary cap days.

But Iginla made the bulk of his money after the lockout of 2004-05 as one of the faces of the NHL — he guided Calgary to a surprising run to the Stanley Cup final where they fell just a game short of the championship in 2004.

The three-year, $16 million contract he signed with Colorado as a 37-year-old also aided his net worth.

The Skinny: Lidstrom is arguably the greatest defenseman who ever lived, boasting seven Norris Trophies and four Stanley Cup wins in his Hall of Fame career with Detroit.

Lidstrom also played in the height of salaries — the mid-1990s and early 2000s — and thus cashed in on his talent and fame by playing in hockey-mad Detroit.

The Skinny: “Jumbo Joe” is something of a wealth compiler. The No. 1 pick of the 1997 NHL draft is in his fourth decade playing as he chases that elusive Stanley Cup championship.

Thornton’s career overlapped the high-earning, pre-salary cap days, but the 2006 Hart Trophy winner also earned massive contracts as the captain and face of the Sharks during the mid-2000s and early 2010s.

The Skinny: Pronger also has a case as one of the best defensemen in NHL history, and he made the bulk of his career earnings as a result of not retiring midway through the seven-year, $34 million contract he signed with the Flyers — thus saving Philadelphia cap space through a loophole in the collective-bargaining agreement.

Still, Pronger earned the bulk of his pay as one of the most physically dominant players of his era.

He won the Hart Trophy in 2001 and played for the Stanley Cup in consecutive seasons in two different cities, helping Anaheim claim the trophy in 2007.

Pronger dipped his toe into a career as a hockey executive but left to assist his wife’s travel business in 2020.

The Skinny: Sakic was the face of two Stanley Cup championship teams in Colorado and the bulk of his career was spent before the NHL adopted a salary cap in 2005.

Sakic also played for the high-spending Avalanche, who needed to keep up with the rival Detroit Red Wings in the Western Conference arms race, and they famously matched an offer sheet from the New York Rangers in 1997 — which entitled him to a $17 million salary in 1997-98 alone according to Cap Friendly.

He is adding to his net worth too as the general manager of the Avalanche, where he is one of the best executives in the game.

The Skinny: Bure helped put hockey in south Florida on the map as one of the few true superstars in Panthers history, and they rewarded him with a lucrative five-year contract after acquiring him from the Canucks in a blockbuster, midseason deal during the 1999-00 season.

Bure led Florida to the playoffs in 2000, but injuries damaged his on-ice production, and he was traded to the Rangers midseason in 2001-02, where he finished his career.

The Skinny: “The Great Eight” famously signed a record 13-year, $124 million contract in 2007 as a 22-year-old, before the NHL banned such contracts from being signed, and lived up to the billing.

If he can catch Gretzky, he may have a chance to climb this list.

The Skinny: Lemieux is arguably the greatest NHL player who ever lived, yet whose career was unfortunately cut short due to a litany of injuries and physical ailments.

Interestingly, that coupled with Pittsburgh’s financial woes of the mid-2000s led to his exponential gain in wealth as he was given an ownership stake in the team as compensation for a lawsuit where he sought fulfillment of his contract.

Lemieux and the Penguins continue to make money hand over fist as one of the NHL’s marquee franchises.

The Skinny: Gretzky is the most famous hockey player ever and played at the height of NHL salaries, so it’s no surprise he’s atop this list.

His on-ice prowess led to a run of pop-culture relevance in the 1980s and 1990s, which aided his bottom line, as did forays in management with Hockey Canada and the Arizona Coyotes — where he was coach and held an ownership stake.

Gretzky remains in the public eye working for Turner as part of their NHL coverage, meaning his net worth should continue to rise.

All career earnings are courtesy of Cap Friendly. Net worth estimates are via CelebrityNetWorth.com and TheRichest.com.