Can You Use Chaos Theory To Beat The House? 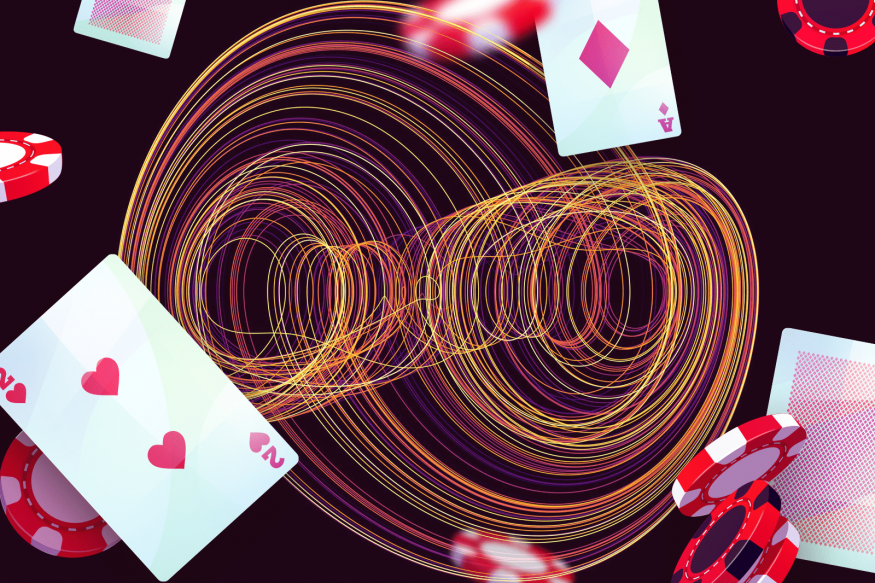 Savvy gamblers are always looking for a way to gain an edge over the house, and that includes looking to the world of science and math for help.

Here we’ll look at chaos theory at its most basic level and whether you can you use it to gain an advantage in blackjack and roulette.

What Is Chaos Theory?

Chaos theory is a complicated mathematical theory that studies the unpredictable and random nature of complex systems.

A complex system could be something like the weather, or the behavior of water boiling on a stove.

It theorizes that a tiny difference in starting conditions will result in a completely different outcome, which is what makes the systems so complex to study.

You might be more familiar with the butterfly effect.

The term was coined by MIT meteorologist and one of the pioneers of chaos theory, Edward Lorenz, when he was developing a weather-prediction model in the 1960s.

He theorized that something as small as a buttery flapping its wings in Asia could be capable of eventually causing a hurricane in the Atlantic.

As is often the case in such discussions of scientific discovery, many nuances were lost in its simplification for widespread audiences.

And is also the case in many scientific discoveries, there were punters hoping to cash in.

Edward Lorenz’s nuanced take on the predictability of weather quickly began discussions on whether roulette spins could be foretold, or whether blackjack shoes were ‘complex systems.’

And wherever there are gamblers looking to cash in, there is always someone selling a how-to guide that will make it quick and easy.

And in all fairness, both blackjack and roulette outcomes certainly do have a sensitive dependence to initial conditions.

So, let’s take a look to see if you can use chaos theory next time you’re at the casino.

Can You Use Chaos Theory To Beat Blackjack?

The beauty of blackjack has always been that it’s not a random game.

The probability of the next card is determined by the cards that have been dealt preceding it.

And due to the rules of the game, a large number of high-value cards left to be dealt changes the odds, sometimes to the point where you have the advantage.

Chaos theory is used to find order in seemingly random data, so there is some sense that maybe it could be applied in some way here.

But that is just smoke and mirrors.

We know the difference that each card’s removal from the game will make, there is no large change from the subtraction of one Ace from a 6-deck shoe.

Six decks of randomly shuffled cards present many opportunities for those that watch what cards have been played and know the value of cards left to be played.

But it does not rise to the level of a complex system. No small change to our starting conditions can lead to big changes by the end of the shoe.

Modeling of millions of shoes of blackjack does not reveal any tipping point where things change suddenly and dramatically.

Rather it shows a simple mathematical progression of highs and lows. Almost like a song if you will.

Can You Use Chaos Theory To Beat Roulette?

The purpose of a roulette wheel from the house side of things is to put together an instrument that creates an independent trial.

One that randomly selects one of 38 different numbers from double zero to 36.

But of course, an ivory ball, a wooden wheel, and a moving metal wheel head are perhaps not the best practical choices for such a task.

Trust an engineer to quickly figure out a system’s flaws. That’s exactly what Joseph Jagger did way back in 1880 when he famously broke the bank in Monte Carlo.

Spotting just one wheel out of dozens that seemed to have flaws, he won about $7 million in today’s money in an up-and-down week that saw the casino realize the problem and attempt a bait and switch with a different wheel head.

I personally saw a rather eccentric Englishman, who went by the pseudonym “Harry Gatto,” beat two separate wheel heads for more than $300K back in the early 90s after tracking them for months.

There is little doubt that roulette wheels have been susceptible to attack in the past due to poor maintenance and flawed design.

The question is whether they still are, and whether chaos theory can help in that pursuit.

Here again, on the surface, it appears that small deviations in starting conditions can cause large changes in results.

A slightly bent fret on a wheel head, a worn ball, a groove in the ball track, a slight tilt to the spindle – any of these can cause a number or segment of numbers to hit more often than they should.

But most of these issues are best described by everyday physics, and while the turn of the roulette wheel and the subsequent landing of the ball is affected by many more things than you might at first think, it’s simply untrue that small differences in things as obscure as humidity or the temperature make a large difference in the speed or, more importantly, the number the ball ultimately lands in.

Casinos Make It Hard To Cheat

As far back as the late 70s physics students from UCSC were tackling roulette with computers.

The issue here, much as counting cards, is that it is almost instantly observable by a trained professional.

You must first get the info on where the ball is, where the wheel head is, and the speed of both, and then still have time to get your bets down where a hidden computer tells you to.

While it can now be accomplished by apps on your phone, you can imagine the frantic betting back in the 80s.

But again, the late betting of coinciding numbers on the wheel head is a dead giveaway. And this is one of many reasons why phones are almost never allowed to be out anywhere near a roulette game.

In rare cases, casinos may wave off new bets after just one or two revolutions of the ball to prevent this type of advantage play.

Other approaches from the late 80s and 90s that looked for tilted wheel heads or other physical issues with the wheels have also largely been fixed.

It’s not uncommon for a larger casino in the states to do wheel maintenance once a week, or even more.

This will include looking for any issues with frets and canoes or ensuring that nothing sticky has gotten on a number to prevent the ball from bouncing out easily.

It will also employ a level to make sure the wheel isn’t tilted in some way, which may have been how my Mr. Gatto managed to beat those roulette games.

And while collecting reams of data on roulette wheel decisions is what is generally prescribed for locating a beatable game, please note that most casinos already pull that data directly from their electronic roulette scoreboards where it can then be analyzed by powerful software looking for anomalies.

My advice on anyone wanting to sell you a chaos theory-derived roulette system is, as always, “Run, don’t walk.”

While roulette remains susceptible to several different advantage plays, most of these are easily defeated by properly trained staff and have nothing to do with chaos theory.

And perhaps the best protection of all is simply keeping two balls on the table of differing weights and sizes.

Even the best physics models or an absolutely stunning supercomputer using some version of chaos modeling won’t get far if they are unsure of the starting conditions that they need to make an accurate prediction.

For something similar, check out:
Can Quantum Entanglement Really Help You Win At Blackjack?