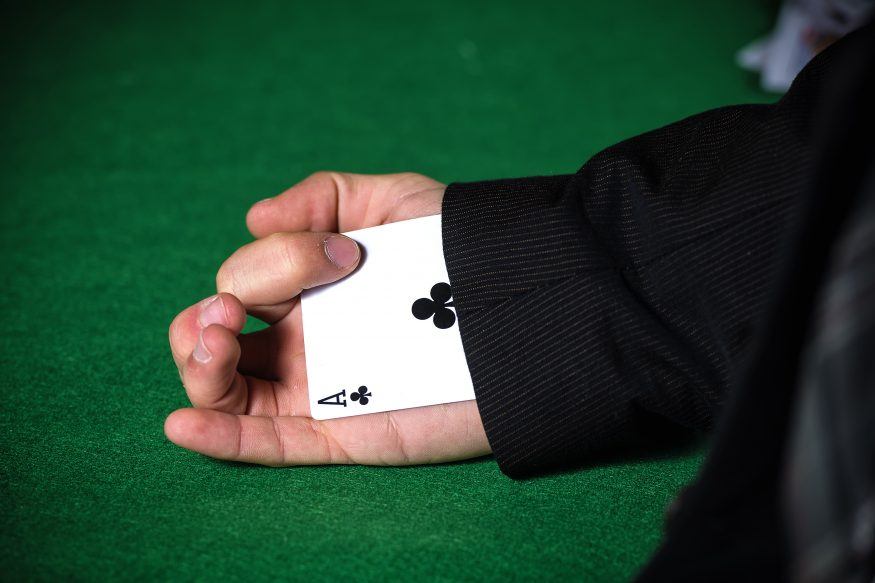 Believe it or not, an ingenious contraption invented over 130 years ago is still in use today both in private card games and casino table games.

In the hands of an expert, it renders incredible sleight of hand completely invisible and in at least one example, this seemingly clunky mechanism was caught beating a casino for almost a million dollars.

Around 1888, a poker game somewhere in North America came to a sudden end when three players leapt upon the fourth and dragged him away from the table.

Protruding from PJ Kepplinger’s sleeve was a metal “thief” with a card clipped to it, ready to be pulled into that sleeve.

Between his legs, a cable was connected from knee to knee and by moving them apart, a system of pulleys would operate the device strapped to Kepplinger’s wrist.

It was the first discovery of the most complex mechanical holdout ever invented but Kepplinger did not go to jail, or even to hospital.

After demonstrating how his machine worked, the three players he’d been cheating just a few hours before, commissioned him to build three identical devices.

Since that day, Kepplinger’s holdout has evolved into a simple, elegant design with two variations: the knee-spread and the toe-spread.

The knee-spread works by cutting small gaps in the inside leg of the operator’s pants so a cable can be stretched between the knees when seated.

The cable continues into a series of handmade brass tubes with specially designed hinges that extend up the side, past the waist and down the arm via a small pulley system.

The knee-spread is the most common variety, but toe spreads are preferable to some machine operators. This is so the cable is not stretched between their legs but extends to their foot where it is anchored and operated by tilting the ankle.

The toe spread takes more practice to perfect as the action requires a muscle to develop. Painful cramping is common when learning to hold the foot at the necessary angle.

Years ago, a good friend called me from Spain after buying a toe-spread holdout for his magic show.

It’s not a great solution for magicians since it’s designed for a single purpose and is meant to be worn while seated, quietly waiting for the right cards to switch in or out of a hand, but my friend had a good idea and wanted to experiment so I’d connected him with the right people to obtain a machine.

When he called me, he was having serious problems making it work, which was not surprising since working with such a device is about as easy as learning to play the bassoon. My friend was seeing no progress, so I agreed to visit and help him work out the wrinkles.

When I got to his place a few weeks later, he was limping and told me the machine was threatening to cut off his big toe! Sure enough, when he removed his shoes and socks his toe was more black than blue.

To resolve this, he had made a tiny metal helmet to protect his toe and proceeded to hook up the cable, replace his socks and painfully push the now-connected foot into his shoes.

I laughed so hard I fell off my chair.

“It’s called a toe-spread but you don’t actually use your toe!” I told him.

In fact, cheaters often wore cowboy boots as the pointed toe was a good place to loop the cable since it required a lot of pressure to pull.

Putting the wire around his big toe, my friend was two pulls away from cutting his toe clean off!

As my magician friend soon learned, the sleight of hand required to accompany the machine is both extremely difficult and particular to the actions of normal card play.

In other words, if you’re being dealt cards, looking at them and sorting them; the methods used in combination with the hidden device look exactly the same as the honest actions of a typical card player.

For my friend, this was the final straw and he ultimately abandoned the idea for a much better one that fools people badly to this day.

For expert machine players, the Kepplinger allows cards to be stolen from play, hidden in the sleeve and returned to their palm invisibly.

In fact, if you ever saw someone play the machine properly, you’d marvel at how there’s absolutely no visible sign that a switch is happening even when you stare at the mechanic’s hands as it’s happening.

No Two Stealing Machines Are The Same

The only reason there are just a handful of machine players out there is that the work is incredibly difficult to do well and the holdout device requires constant maintenance, so the operator needs to be an expert card cheat and a competent machinist.

Another reason is that there are several details about how to use the Kepplinger that remain well-kept secrets. Without that knowledge it’s only a matter of time before a cheater is caught.

Every device is a little different once it’s been used under fire, having been adapted by each owner.

I own a couple, one of which was made specifically for me and is pristine while the other is a hodgepodge of welded joints and additional pieces including the solution to a common problem for all holdout workers designed by its former owner, Wilbur Kelsey.

The pristine version works well but has never been “worked in” while the Kelsey holdout is smooth like butter and is the one I strapped to Sylvester Stallone when working with him on the movie Shade (more on that another time).

There’s A Reason People Still Use Them

I know there are still machine workers out there, stealing from private games and a good friend was perhaps one of the best machine operators who ever lived.

He had learned from another expert player and was able to switch cards without the slightest tell but even he admitted it was a lot of work and a lot of risk for not a lot of money.

As he put it: “You can’t tell them it’s just an ass scratching machine when you get caught!”

He was of the opinion that the best use for it might not be to steal cards and had an intriguing idea that I don’t think he ever pursued that would effectively turn any pack of cards into a marked deck.

It might seem that the Kepplinger is old-hat; an intriguing artefact with few applications in the modern world of community card games like Hold ‘Em. But just a few years ago an American casino caught someone playing Baccarat with one.

I’ll discuss how they might have used it another time but consider this: if you’re not even going to touch the cards, what use is a 130-year-old holdout machine?

Want more from our scams and cheating expert? Check out:

6 Reasons Why You Should Never Count Cards