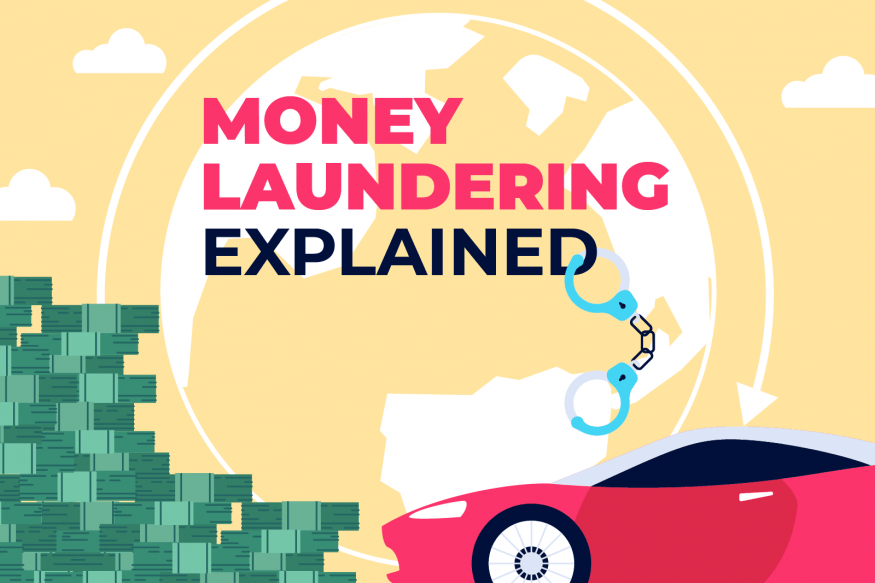 Money laundering is a very serious criminal activity and is much more prevalent than you might think.

What Is Money Laundering?

Simply put: Money laundering is the act of taking illegally-obtained money and making it look like it was earned legally instead.

Criminals ‘clean’ their money through certain kinds of transactions, investments in assets, and other moves that hide the original source of the funds.

The end result is money that ‘looks’ legal and is able to be used without raising any suspicion.

The term allegedly came from notorious mobster Al Capone, who liked to hide his illegal profits as legitimate income in the many laundromats he owned.

Today it’s something of an umbrella term to describe many different methods of deceiving the law about where money came from.

According to the United Nations, it’s estimated that the amount of money laundered globally in one year is between 2-5 percent of the world’s GDP, which could be as much as $2 trillion.

It’s worth noting that estimates should be treated with caution, however, as due to its clandestine nature, it’s impossible to collect accurate data on the amount of money that is globally laundered every year.

Such figures are only intended to give an estimate on the magnitude of the problem.

The 3 Steps of Money Laundering

Even though the practice has been around for centuries and has gotten increasingly complex, there are still just three basic steps to money laundering: placement, layering and integration.

Once dirty money is obtained by criminals, placement into the financial systemis the first step.

It could involve depositing the funds into a bank account registered to a business (real or otherwise) or to a middleman.

This step is where most would-be launderers get caught, as putting large amounts of money into these accounts out of nowhere generally looks suspicious if not done carefully.

Next, the money needs to be disguised by creating complex layers of financial transactions so that its original source can’t be traced.

This is the stage where criminals disguise the trail and make tracing the dirty money as difficult as possible.

There are many ways to do this, including dispersing the funds to multiple bank accounts in different names and countries, changing its currency, or buying expensive assets like houses or cars.

Finally, the launderer seeks to get their now-clean money back through integration into the legitimate financial system.

Everything appears to be legal and could be integrated through a bank transfer to a newly created business or may take the form of a salary.

Once money has been laundered, it is hard for law enforcement bodies to trace it as having been obtained through criminal activity.

Gambling has always been a magnet for people intent on processing the proceeds of crime – in short, money laundering.

That’s why the potential for it to be used as a vehicle for transforming filthy lucre into untraceable, clean cash will always be there.

In live casinos, dirty money is converted into chips, played with for a short while, then cashed out in the form of a check.

Sometimes this is also done through fixed-odds betting terminals (FOBTs) as players play and lose a little bit, then cash out so they have a receipt to show as proof of their ‘winnings’.

There has also been a huge increase in criminals laundering through online casinos, which has been made easier thanks to the astronomical amounts of cash flowing through digital sportsbooks and online casinos every day.

One strategy favored by money launderers is to deposit a large amount of money in a betting account.

They then place a few small dummy bets for appearances’ sake, before emptying the whole account.

This process is even harder to detect if the criminals are patient enough to break their loot down into small amounts.

They can then set up dozens of betting accounts, with deposits well below a benchmark likely to attract attention. After a short while, they cashout all their money.

In these instances, any paper trail will look innocent and legitimate.

The FBI has admitted that even licensed sites offer an opportunity to transfer high volumes of money in and out of different accounts.

And this is an industry in which dozens of unlicensed sites are launched every day – some of them in jurisdictions with weak or non-existent supervisory regimes.

However, law enforcement agencies are more determined than ever to tackle crime by cracking down on money laundering.

And many have their sights firmly trained on betting operators.

But whatever measures the authorities and betting operators impose, the global online gambling market is expected to be worth more than $92.9 billion in 2023.

That makes the challenge to eradicate money laundering a huge one – and means the temptation for criminals to use it for that purpose remains equally large.

Challenging it may be, but casino operators have a moral duty to protect customers and keep crime out of the gambling industry.

They have to be committed to them, assess them regularly and train employees to check customers and know what constitutes suspicious activity.

The Rise Of Crypto Laundering

The advent of digital banking and cryptocurrencies has made moving money quickly and covertly easier than ever by criminals, making laundering one of the biggest crimes of our time.

According to a recent report by Crypto.com, the number of global crypto users reached 221 million in June 2021.

Due to anonymity, it’s even easier for criminals to launder money through cryptocurrencies, which makes it even harder to track and therefore source data on the levels of crime.

In a report by the Basel Institute on Governance, of the estimated $21.4 billion in crytpo transactions in 2019, criminal activity represented around $450 million.

The actual figure could be much higher but it is very hard to trace.

As cryptocurrencies continue to grow in popularity and usage, it will be interesting to see how governments attempt to stop criminals from using them to launder money.

The contents of this blog are provided as an information guide only and do not amount to legal advice. The blog seeks to raise awareness of, and educate the public on, money laundering issues in order to shine the spotlight on and prevent this criminal activity.