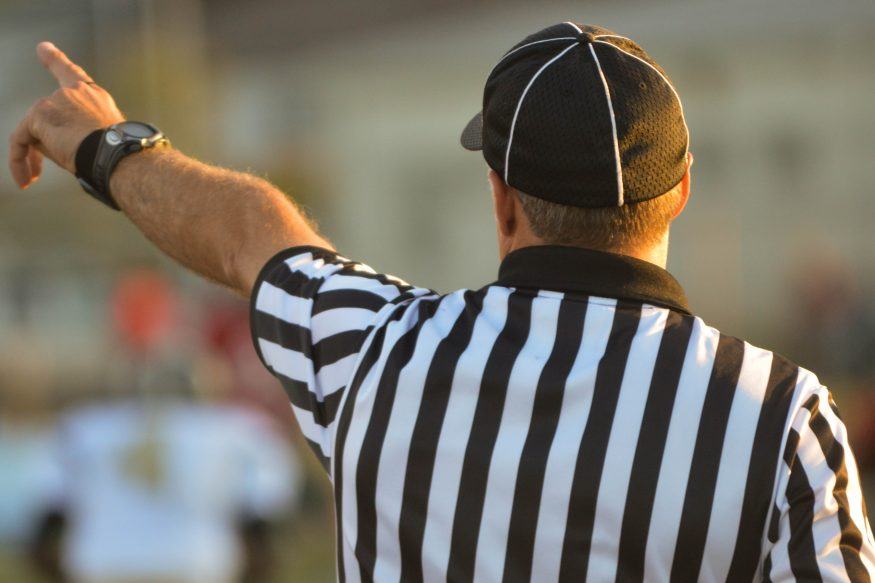 The NFL is preparing for its biggest game of the year this weekend. The Super Bowl is one of the most watched events, both on American TV and around the world. Fans love to see the best teams fight it out for the coveted title.

But many are furious this year that those two teams might not actually be the best thanks to a bad call against the Saints.

Referees in any game are tasked with upholding the rules and ensuring fair play. But there is still plenty of room for human error, although increasingly technology is helping to make games even more fair and transparent. As a result, we can hope that these bad calls will soon be a thing of the past.

1. No Interference in Saints-Rams Championship Game

During the final moments of the NFC Championship Game between the Los Angeles Rams and the New Orleans Saints, referee Bill Vinovich’s crew missed a blatant pass interference call.

Had the correct call been made, the Saints would have gotten a new set of downs and a chance to run down the clock. Instead, the Rams managed to get to overtime and beat the Saints 26-23, getting a spot in the Super Bowl.

Response to the bad call was instant, thanks to social media. Just check out these gems:

Oh no… They already got to his his Wiki page. #Saints pic.twitter.com/7zArM2OZ33

Really bad time for refs to do the Bird box challenge. pic.twitter.com/sCX0rWPv4u

The referees on that no call ?

The NFL has since acknowledged that it was a bad call, but no changes will be made.

It seems bad calls are an NFL tradition looking at this one from the 1970s. The Raiders intentionally batted the ball forward following a fumble, essentially pushing the ball into a touchdown.

The fact the referees let it fly is bad enough, but the players even admitted to advancing the ball illegally later on.

You would think the idea of when someone catches a ball would be fairly straight forward, especially in a game all about throwing, kicking and catching balls. But despite catching a wild throw, getting his feet on the ground in the end zone and even touching the ball to that ground, this pass was ruled as incomplete.

It led to the creation of the Calvin Johnson rule in his name, although questions persist about when a catch is really a catch.

Okay, catching could be confusing, but a coin toss is cut and dry. Well, maybe not. The referee, Phil Luckett, hears heads despite the player calling for tails.

LOL – How did he get that wrong?

It even led to a change in the NFL rules, requiring captains to call heads or tails before the referee tosses the coin instead of when the coin is in the air.

Sure, the usual referees might not be favorite characters, but the replacement referees used during 2012 were even worse.

When the Seahawks’ Quarterback, Russell Wilson, threw a desperation throw into the end zone, the Packers’ safety Jennings intercepted the attempt. Well, one referee signaled interceptions while another called it a touchdown.

The NFL rules state that if two players have possession at the same time, the ball goes to the offensive player, but this was not the case. The Seahawk player in the end zone barely had his hand on the ball, just as the replacement referees barely had a handle on the rules of the game, it seems.

But it’s just a game, right?

Bad plays are common in any sport, so why are people so up in arms about it?

Well, there are the immediate consequences in terms of team rankings and even entry into the Super Bowl. But there can also be some systemic issues.

If teams and fans can’t trust the referees, it’s hard to truly enjoy the game. Plus, this can lead to questions about ethics or the ability to buy a referee’s stance. With sports betting now legalized in more of the US, the NFL themselves are against proposition bets, also called prop bets, because they could lead to issues of cheating.

Prop bets let fans wager on additional elements of the game, such as the number of passing yards by a quarterback or how many flags a referee might throw. If a referee were in on that wager, it might adjust the way a game is called. Then again, these were concerns even before sports betting was legalized.

The reality is that TV viewership is steadily declining. That doesn’t mean that people of all ages aren’t sports fans anymore, but that they are consuming the content differently. Instead of putting a game on in the background, they might follow along on twitter.

When referees make bad calls, it can lead to a flurry of social media attention, but that might not change just how often people turn on a game to watch, especially when they can see the bad call in gif form on social media a minute later.