Our alleged obsession with casino demolitions continues with the latest from the 18 Fremont project in downtown Las Vegas.

Let’s cut to the chase.

Demolition crews have made quick work of several buildings at the block on Fremont Street that’s home to the closed Las Vegas Club. Recently leveled was the strip club equivalent of a Petri dish, Glitter Gulch.

On Aug. 2, 2017, excavators began having their way with a once-popular grind joint, Mermaids. (Please note it’s Mermaids, not Mermaid’s. Like Caesars Palace. And that’s the only way Mermaids was in any way like Caesars Palace, trust us.)

Here’s a sweet look at the sexy demolition happening at 18 Fremont. Yes, video is a bit of overkill, but blog awards don’t win themselves.

Mermaids closed on June 27, 2016. And, yes, this blog personally had the very last deep fried Oreos ever served there. We love living dangerously.

Look closely at our exclusive photos of Mermaids and you may get a glimpse of a little-known historical artifact, Cosmo’s Underground Italian Restaurant.

The demolition at 18 Fremont is being done by North American Dismantling Corp., considered to be one of the best demolition companies in the world.

The demolition company has proven it can multi-task, because on the same day they went to town on Mermaids, they also took some mighty big chunks out of the Las Vegas Club casino.

Plans are for the entire 18 Fremont block to be taken down to the ground, paving the way for a new downtown casino resort owned by Derek and Greg Stevens, owners of The D and Golden Gate.

Next, North American Dismantling Corp. will get to work on the Las Vegas Club parking structure, then the two Las Vegas Club hotel towers, with the assistance of the largest excavator in the country.

Crews will use a 182-foot CAT 5110B Ultra High-Reach Excavator to take apart the hotel towers. The excavator can reach the top of an 18-story building.

It’s expected demolition of the entire 18 Fremont block will be completed by the end of 2017, and the new resort is likely to open sometime in 2020.

Enjoy a few more photos from the Las Vegas Club and Mermaids demolition site, and if you bump into Derek Stevens at The D, please tell him he should let us share the name of his new resort, thanks. 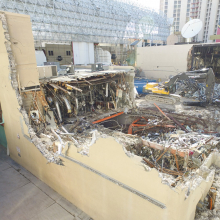 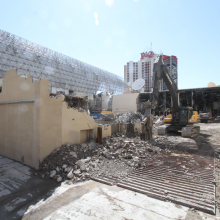 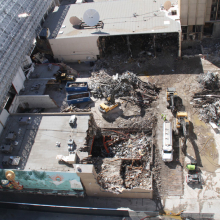 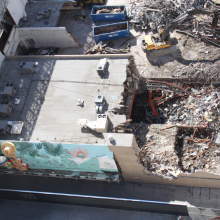 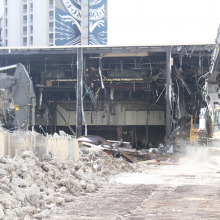 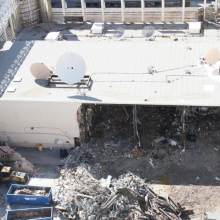 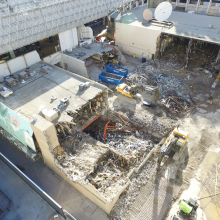 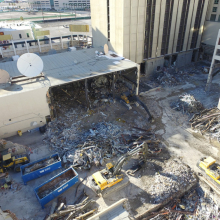 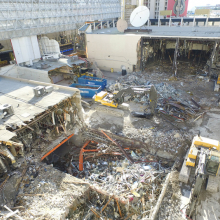 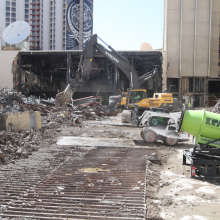