We’ve spent the better part of a year lambasting the Grand Bazaar Shops at Bally’s Las Vegas for being an appalling eyesore, a pox on the otherwise glorious Las Vegas Strip, then all of a sudden, we visited the alleged eyesore at night and, seemingly out of nowhere, voila.

That’s right. The Grand Bazaar Shops, the former laughing stock of The Strip, is actually sexy as hell in the dark.

It might be helpful to put this phenomenon into context.

Say you’re in a Las Vegas nightclub. You hook up with a hottie and have the time of your life. Then the sun comes up. You see your conquest in broad daylight. In many cases, the daytime reality is a far cry from the vision in your head.

Nighttime, it turns out, is the Vegas equivalent of beer goggles for the Grand Bazaar Shops at Bally’s, and we’re going to say it straight up, we were wrong about you, you sexy thang.

What’s not to love about the undulating glow of the kiosk rooftops that during the day look like the scales of a fish exposed to dangerously high levels of radiation?

Just think “Logan’s Run,” and you, too, will begin to appreciate the Vegas vibe of this much-maligned (we should know, we’ve been maligning it) new shopping center.

Not a fan of the color scheme? Hang out for a minute. The colors change. Check out our video below.

How did this monstrosity suddenly become one of the most eye-pleasing free shows in Las Vegas? We’re going to chalk it up to Sin City magic. Or Captain Morgan spiced rum. One of those things.

It’s been announced the Grand Bazaar Shops at Bally’s will officially open on Feb. 26, 2015.

Now, having viewed the shopping complex in all its colorful nighttime glory, the thing we once dreaded now borders on, gasp, “We might actually go there once, if we’re really bored and have the sudden urge to barter for a dice clock.”

Grand Bazaar Shops at Bally’s will feature 120 shops, including upwards of three we might actually care about. Because gelato.

Along with its souvenir kiosks, the shopping center will have food and bar offerings, including Wahlburgers (brought to you by, yes, the brothers Wahlburger of Marky Mark and New Kids on the Block fame) and an outpost of one of our favorite downtown joints, Nacho Daddy. Yes, the one with the scorpion shots.

Granted, it’s a mall. But we like eye candy, so we’re going to give the Grand Bazaar Shops the benefit of a doubt for the moment.

Our advice? Plan on visiting the Grand Bazaar Shops after sunset to best enjoy its glimmering luminescence. Because we expect that will be the best thing about it given the over-hyped Swarovski Crystal Starburst is going to be even more disappointing than the SkyVue observation wheel or a date with your mom, whatever that might mean.

More photos may or may not be available for viewing below, and feel free to tell us we’re barking up the wrong starburst. We can take it. 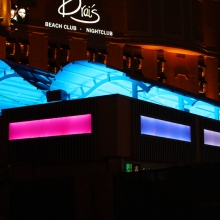 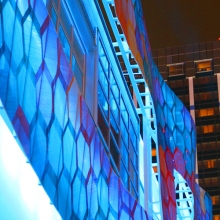 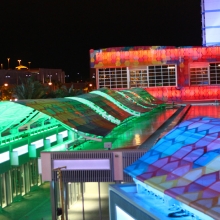 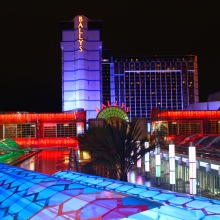 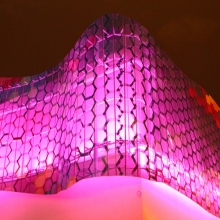 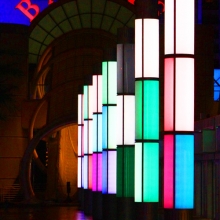 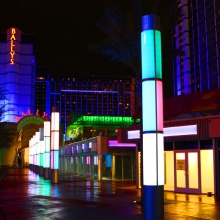 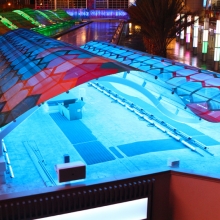 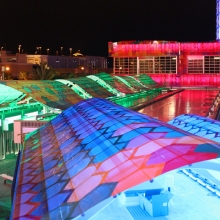 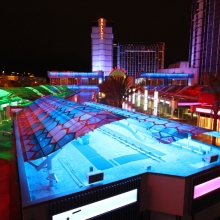 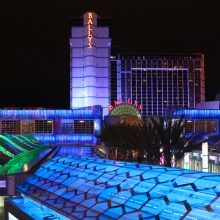 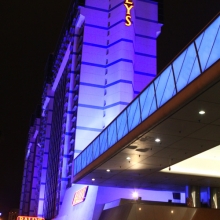 Leave your thoughts on “WTF Just Happened: Grand Bazaar Shops at Bally’s Go From Ugly Ducking to Swan Under Cover of Darkness”