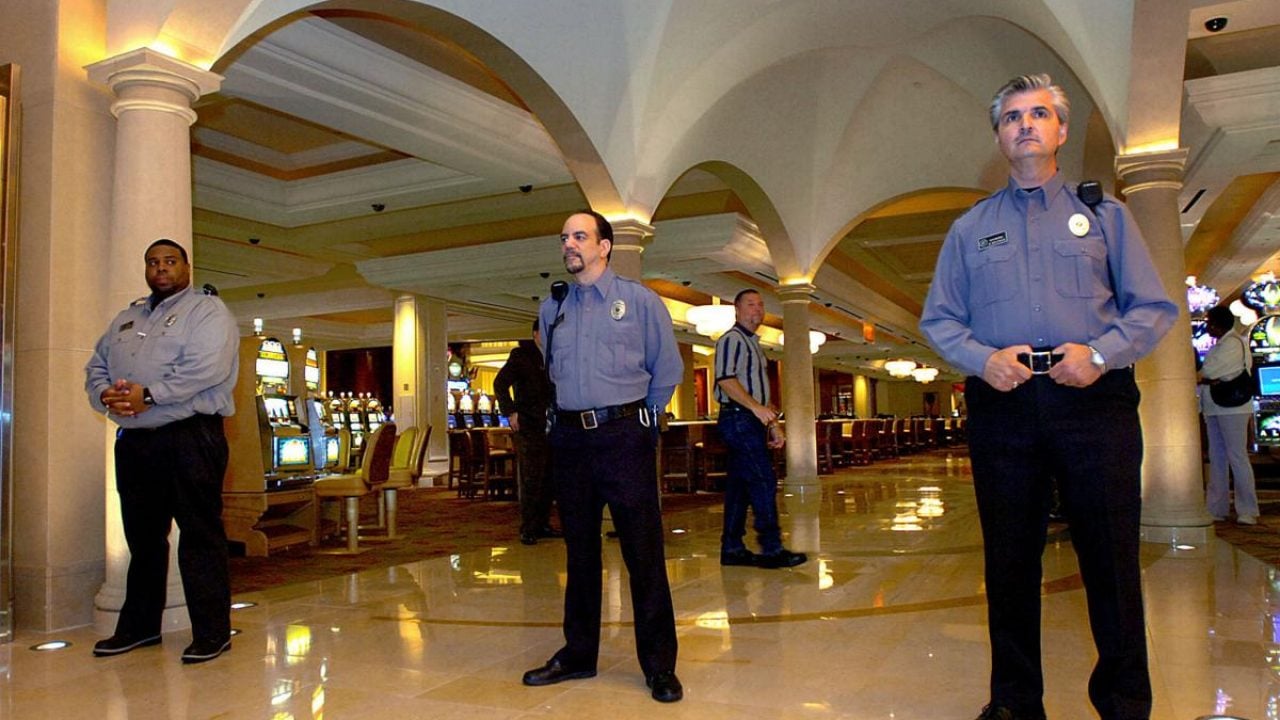 Being the world’s biggest poker competition, the World Series of Poker invests a lot of resources into its security.

But how do they prevent cheating and keep players safe?

In this article, we’ll look into various WSOP security aspects and how they dealt with the challenges of moving it online during the pandemic.

The Eye In The Sky And A Huge Security Team

The World Series of Poker has moved to a new Strip location this year – the Bally’s and Paris Las Vegas Hotels and Casinos – after 17 years at the Rio Hotel and Casino.

Both are major gaming venues in Las Vegas, so at the WSOP there are all the standard security measures in place you’d expect in a casino.

The entire gaming floor is covered by high-resolution surveillance cameras that follow everything that goes on.

The security teams behind the scenes keep their eyes peeled to the monitors and are ready to react to any suspicious behavior.

Poker tables are crowded and there are tens of thousands of players who come and go, so it may seem virtually impossible to keep everything under control. But that’s just an illusion.

Casino security personnel are used to dealing with huge numbers of visitors and are experts at their job. They know what things to look out for and can quickly spot someone up to no good.

Of course, there is also the security staff on the floor itself.

They observe everything that’s going on and are ready to react if they get a signal from the surveillance room. It’s all one big, well-oiled machine that operates around the clock.

Without strict security, it would be impossible for the WSOP to maintain the integrity of its tournaments.

While most players are fair and honest, what would prevent the dishonest ones from stealing chips from other stacks or cheating in other ways?

To an untrained eye, it may seem like anything goes when there are several thousand people in the room.

But the WSOP’s security team is very alert and quick to react if there is anything questionable going on.

The best proof of this is that in over five decades, there’s not been a single major cheating scandal at the series.

How Does WSOP Protect Winners?

There is no doubt that WSOP has got security covered inside the casinos, but what happens once players step outside?

Tournament winners and even those making a deep run can be carrying quite a bit of cash, making them very desirable targets for criminals.

In 2019, there was a fairly heated debate regarding this issue after one player shared a story about being robbed at the Rio parking lot.

There was an outcry from the community, asking the organizers to provide more security for players to ensure these things didn’t happen again in the future.

As expected, WSOP replied to these complaints and explained what resources are available to players if they feel they need protection.

So, if you don’t feel comfortable going alone, know that all players are allowed to ask one of the WSOP security staff on the floor to accompany them to their car.

This service will be provided with no questions asked.

There is also enhanced security presence inside and outside of the venue during the series, so there are more patrols going around.

Remember that WSOP also offers other alternatives if you’re not comfortable carrying cash.

You can always ask the casino to wire your winnings or use one of the WSOP cages to store your cash safely.

The second option is very safe and quite convenient if you plan on playing more events, as you’ll have cash on-site and can easily access it.

With all that being said, it’s also important to stay alert yourself.

It’s a huge area, so security can’t be present everywhere at all times – you’ll need to be vigilant.

As you probably know, the 2020 World Series of Poker was held almost entirely online thanks to the Coronavirus outbreak.

Having online WSOP events was nothing new.

For a few years now, players have had an opportunity to compete for coveted bracelets via their electronic devices in select events.

However, this was the first time the entire schedule took place online.

Plus, because of the delicate situation with internet poker, we essentially had two WSOPs – one for the US players and the other for the international player pool.

This created a whole new set of security challenges and problems that the organizers had to address.

One example being that online cheating techniques are much different from live ones and are often not as easy to detect.

In fact, when WSOP officials announced the online series, many members of the poker community voiced their concerns over potential security issues.

With so much money on the line, there was plenty of incentive for cheating.

Jeff Madsen was one of the more vocal players to raise concerns about WSOP online security issues. He put a particular emphasis on the fact that there were actual bracelets up for grabs.

In an online environment, it’s all too easy for someone to take over a tournament at any stage and continue playing under someone else’s name.

This practice, although technically against the rules, has been quite present in the online poker community. But with bracelets on the line, there are some obvious ethical concerns.

In live WSOP events, there is a clear “one player per one hand” rule.

If you tried to get advice from anyone while a hand was in progress, you’d probably end up with a warning and penalty. If such behavior is repeated, you risk being disqualified.

Online, though, this practice is known as “ghosting” and it’s virtually impossible to stop.

Without WSOP dispatching guards to every person’s home to watch them while they play, they can’t know if it’s a single person playing or if they have an entire team behind them to help them make the best decisions.

However, the organizers do have some tools available to them.

While it’s hard for the WSOP to do much on the spot, every tournament is carefully reviewed once the play is finished.

Security experts look for unusual patterns and any inconsistencies that could indicate any form of cheating.

If there are red flags, accounts are subject to a detailed examination.

If cheating is confirmed, the player will be disqualified, their account banned from the platform, and their winnings confiscated and distributed to the legitimate players.

This isn’t a foolproof system, but it’s certainly a deterrent for a majority of those who might think about cheating their way to a bracelet.

The WSOP has the experience and resources to keep players safe and its games fair, and there is hardly a challenge they can’t deal with.

Most importantly, whether you play live or online, you can rest assured you’re in good hands and protected against cheaters of all kinds as much as is humanly possible.

In poker, just like in life, nothing is guaranteed, but with a brand like WSOP running things behind the scenes, it’s probably as good as it gets.