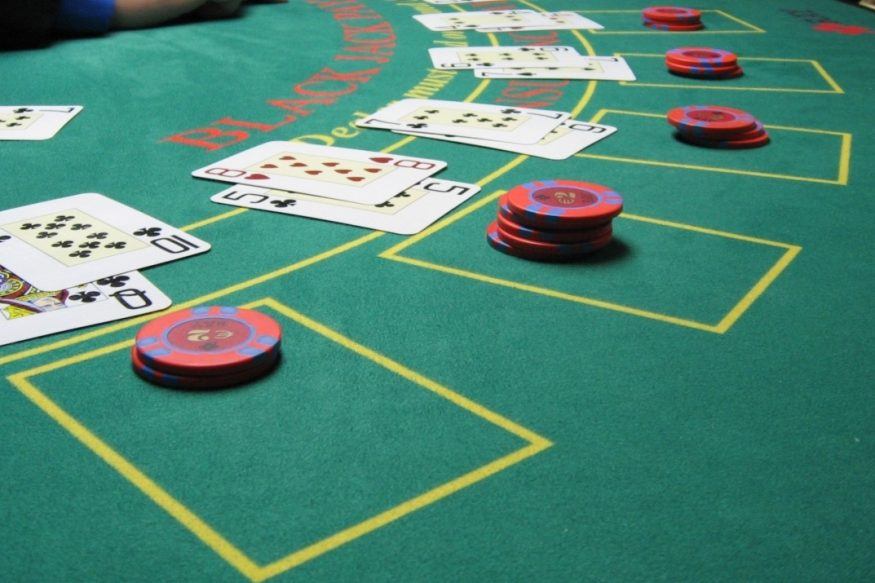 A few words on Counting cards for complete beginners.

A quick search of any gambling publisher’s catalogue will reveal an overwhelming selection of books offering to teach readers how to count cards when playing twenty-one.

Needless to say, I can’t cover enough information in one article to make anyone a serious card counter but for rank beginners or curious players, I offer a few words on what card counting is and how to begin practicing.

The core principle of counting is that cards already dealt reveal something about cards that remain unseen.

If cards are dealt without shuffling between rounds, it’s possible to use observations from previous rounds to predict whether the remaining cards will be more or less favourable to your chances of winning against the dealer.

If you’re new to card counting, don’t worry if it seems complicated.

To better understand this concept, let’s play a simple game to illustrate how counting works.

Shuffle any 10 red cards into any 10 black cards.

Imagine that you win one chip for a red card and lose one chip for a black card. After shuffling, deal 10 cards face up in a row and see how many red cards are amongst them.

If you see five red cards, the other five must be black since you’re looking at 10 face-up cards. So how many red and black cards are in the 10 cards you haven’t looked at yet?

Now let’s imagine you see only three red cards in the first 10 (below). You know a red card means you win, and a black card means you lose. And if you had been betting one-dollar chips for the first 10 cards, you will have won three dollars and lost seven dollars.

But how much should you bet for the next 10 cards?

Thanks to a very basic version of card counting, you already know that you will win seven times out of 10 if allowed to bet on all 10 cards.

If you keep betting one-dollar chips, the best outcome is you will break even. But now you have a clear advantage: you know you’re going to win more times than you’re going to lose!

Therefore, if you increase your bets now, you will easily cover your previous losses.

How much should you bet?

What’s the limit? A hundred bucks? Bet that. A million? A billion? If you can bet on all 10 of those cards with the information you now know you have, why wouldn’t you?

What if you decided to increase your bet to a hundred dollars per card but lost the first three times to all black cards? All remaining cards are now red cards and if you bet, you win. So, increase your bet size and let it ride!

The core principle: increasing your bets when you have a better chance of winning guarantees an advantage.

Sadly, even if you could find a version of this game, no casino would let you play to the last card; a plastic cut card would be inserted after the shuffle and anything behind that would not be played.

For our simple black/red game, let’s agree the dealer will only play 15 cards before the cards are reshuffled.

After the first 10, you know that there are seven red cards and three blacks remaining, but only five of those cards can be played and three of those might be black.

Never-the-less, the odds are in your favour so you should increase your bets accordingly!

Counting is not about knowing the exact cards you will be dealt; it’s about the contents of the remaining deck as a whole.

It monitors the quality of cards exposed so you can determine the quality of those remaining to be played. This allows players to decide whether they have a better or worse chance of winning with cards they are yet to see.

If you bet less money when the deck is less favourable (or have not counted) and more when your chances improve, your winnings over time will be dictated by the accuracy of that information and the size of your spread.

Bet spread: the difference between a small bet and a high bet. At a five-dollar table, I might bet five dollars a hand until my count becomes suitably positive at which point I would increase my bet accordingly.

The simplest model would be a one to 20 spread where I bet five dollars a hand until my count reaches a predetermined level, then I bet a hundred dollars a hand. This is the kind of wild swing in bet sizes that will wake up even the sleepiest of pit bosses in a live casino – more on how professional teams conceal their spread in a later article.

How good your system is depends greatly on how much data you can feed into it. The more cards you see before the decks are reshuffled, the more information you can process about what remains.

If a casino offers eight deck blackjack but place their plastic cut-card four decks down, you can’t beat that game with simple counting alone. You need to play into the bottom four decks to take advantage of information gained from the top four.

If dealers place the cut card six decks down, you gain an advantage when you play into those fifth and six decks because the first four decks reveal important information about what’s left.

In card counting, it’s not about red or black cards, of course. In the simplest systems, we monitor high and low cards and use the ever-changing “count” to decide whether the deck is becoming more or less profitable.

Imagine a single-deck game with a cut card around 40 cards down. The first 26 cards played are all low and middle cards so all the aces and high cards are still to be played.

Would you increase your bet?

If the answer is yes, I assume you get the idea.

If the answer is “Hell, yes!”, you may already be a card counter.

If you’re still not sure, simply the flip the example: Instead of low cards, all the high cards and aces are dealt from the first half of the deck. You have a few rounds left to play before the deck is shuffled but all the cards you really want are already dealt and sitting in the discard tray.

In this example, I’d go for a coffee or wait for a fresh deck.

Your Turn to Try: Grab A Deck!

Returning to our “red wins and black loses” game (above), find a deck of cards and shuffle it thoroughly.

Cut the deck into two approximate halves, pick one and deal the cards face-up one at a time.

You will pass through positive and negative numbers as you do this.

If there are more red cards in the cards you deal, your count will end with a negative number.

If there are more black cards, you will end with a positive number.

If there are the same number of reds and blacks, you will end with a zero count.

Check your work then ask yourself this question: are there more reds than blacks in the half I did not deal – if so, how many more?

If you can do this with any degree of accuracy, congratulations, you’re already on your way to being a card counter.

Internet casinos often employ constant shufflers unless they offer “live play” dealt from eight decks for online players. This means that the cards may be shuffled between each round of play offering no residual information to carry into the next round.

It’s still a good place to practice counting from round to round and some casinos even offer training tools, like this Casino.org card counting trainer!

Other articles by R. Paul Wilson include why you should learn to shuffle and how “The Tip” scam in poker works.  Come back on July 15 for his next post that covers one of the most commonly asked questions: “Did I get cheated?”