Up to £10 in free bets
Welcome Bonus
Certifications

PaddyPower Sports at a glance

A Look Inside PaddyPower Sports 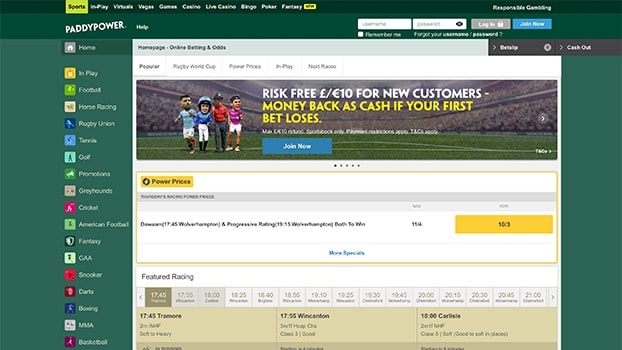 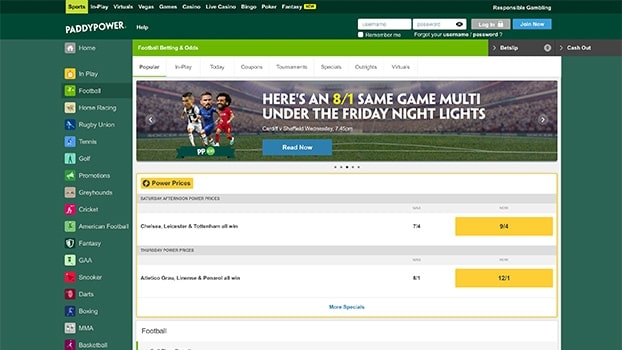 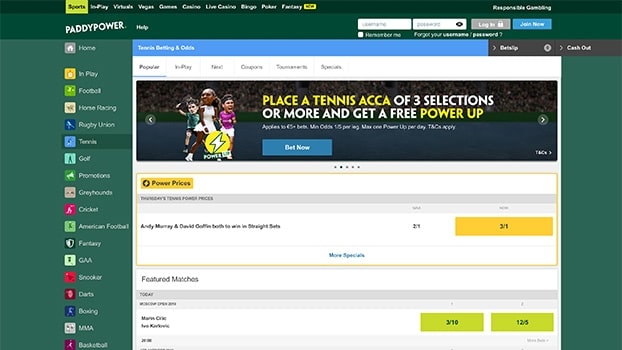 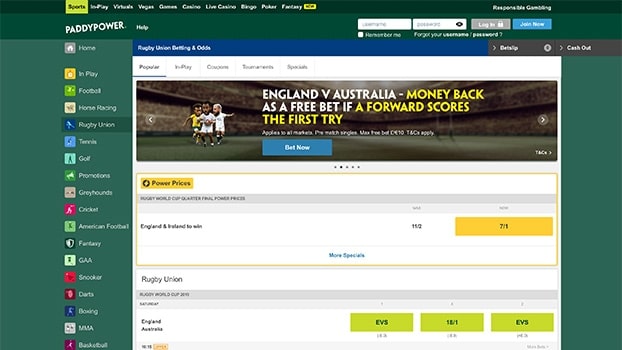 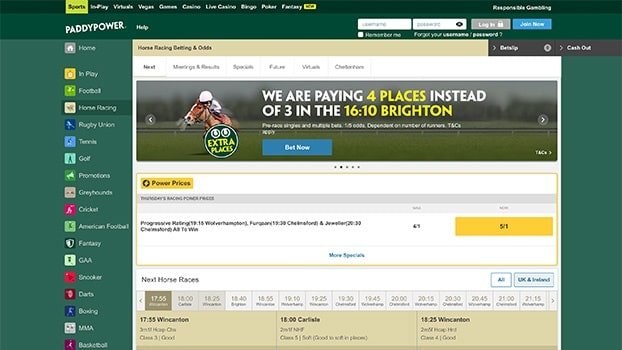 Paddy Power opened their doors over thirty years ago and now has over 350 betting shops and started taking online bets in 2000. Since then it’s become an industry leader in online sports betting, casino, poker and more. It has a lot to offer in terms of sports and bets, bonuses, banking options and fantastic customer support. Keep reading for our in-depth 2022 Paddy Power review.

Paddy Power definitely has its own style and personality. The site is colorful and fun to use but it doesn’t come at the cost of functionality. The website and app are laid out in a really intuitive way, especially if you’re betting on the most popular sports and matches. It’s easy to navigate between sports and you can drill down into specific leagues and matches to find all the available bets.

Pick from hundreds of bets

It has earned a reputation for taking action on almost anything and it shows when you start browsing the selection of bets. Money lines, point totals, props, futures and every other popular bet you can imagine are all covered. For major sports like football and the big North American leagues, there are too many different bets to list.

We are particularly impressed with the selection of in-play wagers you can make while the match is happening. The Paddy Power app and site both show a live graphic of the game to help you follow the action. It’s a cool feature, especially if you’re not in front of a TV when the game’s playing out.

Again, the exact selection of live and pre-game bets depends on the sport but we were really impressed with how much there is to choose from.

There’s a huge number of football leagues including Champions League, Premier League and over 100 other leagues from around the world that you can bet on. You can also bet on American major leagues like NFL, MLB, NBA and NHL plus golf, tennis, boxing, MMA, cricket, rugby, horse racing, greyhounds and virtual sports.

Paddy Power has a vertical toolbar with all the available sports pinned to the left side of the screen wherever you go on the site.

Sit back and relax because listing all the promotions on Paddy Power is going to take some time. Seriously, we’ve reviewed every major sportsbook on the market and it’s tough to find another site that can match Paddy Power’s bonuses.

Paddy Power follows the traditional bonus structure with a good welcome deal plus ongoing promotions as you keep betting. Where the site stands out is with its sport-specific offers, special boosted odds and wide variety of ways you can get your losing bets refunded.

You can get risk free bets that refunds your wager if you lose or weekly free bets, depending on your betting.

Paddy Power runs an interesting promotion called Money Back Mondays. Each week gamblers can vote on a specific losing football market from the previous week. Paddy Power then chooses the most popular market and refunds losing wagers with free bets.

Other promotions and bonuses

There are lots of bonuses that apply to specific sports and leagues too. A good example is the 2 Up - You Win offer. If your team goes up by two points at any point in the game, you can cash out your full winnings, regardless of whether the team goes on to draw or lose the game.

Depending on what big events are coming up you’ll also find special bonuses and deals on tennis, gold, horse racing and more.

Betting with one of the UK’s biggest sports betting brands has advantages and one of them is definitely the banking options. Not only does Paddy Power accept a lot of different online payment methods for deposits and withdrawals, there are some convenient ways you can make transactions in real life too.

Paddy Power has hundreds of land-based betting shops which makes it really easy to move money to and from your online betting account. The site also offers its own card called the Cash Card PPlus that makes cashing out from Paddy Power really easy. It’s basically a debit card that’s linked to your Paddy Power account instead of your bank account.

You won’t be charged any additional fees for using any of the options listed above. The processing times depend on which option you choose. Skrill, NETELLER and PayPal are the fastest and will be processed in between four and 24 hours. Credit and debit cards take 2-3 days and bank transfers can take up to five business days.

From its days as a brick and mortar betting establishment right through to accepting online bets, Paddy Power has earned a good reputation for security and fair play. Winning bets are settled quickly and cash outs are processed hassle free.

Paddy Power offers some of the best customer support on the market. There’s a help button at the top of every page which takes you to a big FAQ section. If you can’t find an answer on your own there are lots of ways to contact the customer support team. You can tweet at Paddy Power directly which is a really popular way to interact with the company. There’s also 24/7 live chat and phone support.

We had good luck with the support reps. They were easy to work with and really helpful trying to solve our problems.

The company has worked hard to improve its mobile betting options and it really shows in the newest version of the app. It’s simply great, just take a look at Paddy Power’s ratings in the App Store. It scored a 4.7 out of 5 across more than 73,000 ratings.

During our test we loved using the app for checking out new markets and placing bets. Everything’s laid out well and overall super easy and convenient.

If you prefer not to install more apps on your device you can also access Paddy Power’s mobile site right in your phone or tablet’s internet browser. It’s almost the same but we recommend using the dedicated app for the absolute best experience.

We tested Paddy Power’s sports app on lots of different Apple and Android devices including iPhone, iPad, Galaxy, Huawei P30 Pro and lots more. We made sure to access all the different sports, bets and tools.

Overall we were really impressed with Paddy Power’s sports betting site and app. All the most important features are there and we like that Paddy Power has its own personality and style. The company has worked hard to create a unique brand and it’s succeeded in building a real community among its players.

Paddy Power doesn’t take itself too seriously when it comes to marketing but it still delivers a professional experience in terms of payment methods, security and the caliber of its software and app.

Throw in a huge menu of sports and bets plus a ton of great bonuses and it’s easy to see why Paddy Power has been successful for so long. From what we’ve seen, when people sign up and start betting with Paddy Power they usually become lifelong customers.