Why Are There 12 Rounds In Boxing? 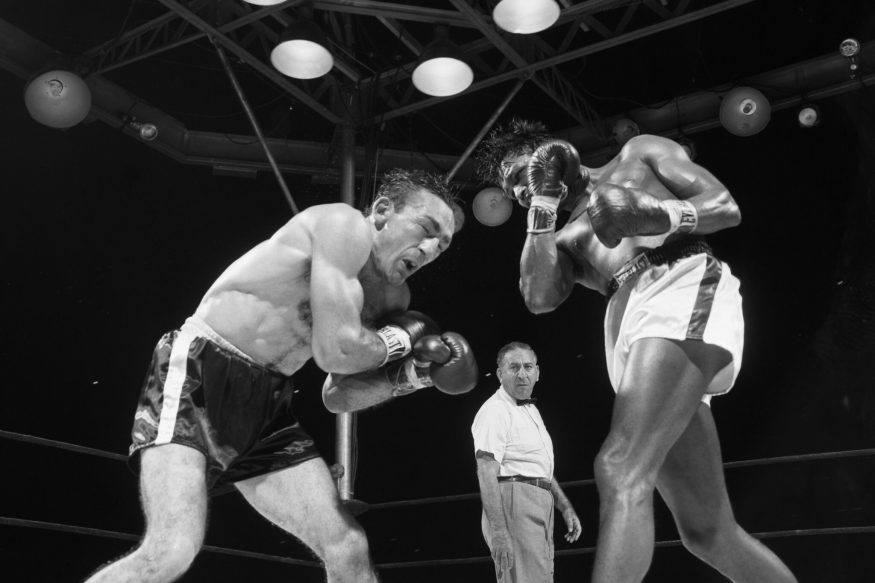 Nowadays in boxing the final bell sounds once the 12th round comes to an end in top level and world title fights. But that wasn’t always the case.

Before a change in the rules the end of the 12th round didn’t signal the conclusion of a bout but rather the beginning of what were known as the original ‘championship rounds’ ahead of the 15th and final period.

‘Going the distance’ once meant completing 45 minutes of action in the ring instead of the current 36 minutes in the big clashes.

So why are there 12 rounds in boxing today?

Rounds Reduced After Tragic Fatality In The Ring

The number of rounds were taken down from 15 to 12 mainly due to one hugely significant fight in boxing history.

Back on November 13, 1982, the brutal encounter between Ray Mancini and Duk Koo Kim ultimately forced an overhaul in the sport’s length and rules in a bid to help boost safety of combatants.

South Korean warrior Kim collapsed and was taken to hospital immediately after being stopped in the 14th and penultimate scheduled round of a truly gruelling meeting with American “Boom Boom”, having both gone toe to toe throughout proceedings.

He had to undergo emergency brain surgery but tragically passed away from his sustained injuries, with his death eventually being pivotal in the decision to reduce the number of rounds in championship bouts.

While tragedy is sadly a risk associated with prize-fighting, those in the sport’s hierarchy opted to make this massive reform of the rules.

Changes In The Rules

By 1988, all major world title fights had been decreased from the long-standing and standard 15 to 12.

The following year the first ever heavyweight title showdown under the new shortened distance took place, with Larry Holmes and Lucien Rodriguez colliding across a scheduled 12 rounds.

Notably, there was a difference of opinions between the sport’s belt organisations during this tractional period of time.

The WBC almost immediately altered their rules in light of the tragic Kim bout but others took longer to follow that same path.

The WBA, who had not yet separated from the WBO, eventually changed their rules and voted to reduce their championship distances to 12 rounds in 1987.

While the IBF, which had also recently broken away from the WBA, maintained the standard 15-round clashes as they claimed there was no documented medical evidence that the extra nine minutes were more dangerous.

However, in 1988 they too ultimately changed their stance though, reducing their governed fights to 12 rounds.

American superstar Mike Tyson was involved in the final scheduled heavyweight 15 rounder, when he stopped Tyrell Biggs inside seven to retain his WBA, WBC and IBF crowns in October 1987.

In recent times there have actually been several calls from certain fighters and their teams to return to the old scheduled distance of 15 rounds, in a bid to improve overall standards again.

In fact, a look back in history and it’s evident that a lot of the most iconic boxing moments would never have occurred if not for the 15-round limit.

While there have also been arguments in the other instance that famous results would’ve differed in the longer format, including Marvin Hagler’s high-profile and controversial defeat to Sugar Ray Leonard over 12 (1987) and Jermain Taylor’s middleweight victory over Bernard Hopkins (2005).

Would Leonard have been able to withstand Hagler’s pressure for a further three rounds? Could a tiring Taylor have had enough left in the tank for nine more minutes?

Questions like this are often asked in the modern era under the 12-round limit.

Before retiring, former heavyweight kingpin Larry Holmes once stated:
“It will cut down on injuries for a lot of fighters but it will take away from the true champions. A true champion can go 15 rounds.”

But reverting back to the past ruleset is highly unlikely of ever coming to fruition after so many years, with there having been many studies to highlight the damaging effects on combatants during the longer past format.

Some reports have previously concluded that the brain becomes more susceptible to damage beyond 12 rounds, while others have argued that 15 rounds escalates the risk of dehydration and exhaustion.

Therefore, a case has been in the past that it’s the fighters competing below heavyweight that are more in danger of fatal consequences due to the pressure of making weight, attributing deaths to dehydration.

Of course, there was a time in the sport’s rich history when 15 rounds may not have even been the midpoint of a fight.

In the very early days of pugilism there were literally no limits of the number of rounds in bare-knuckle clashes, meaning those involved would have to battle to a definitive conclusion (i.e. until someone was knocked out or surrendered).

This, expectedly, led to a host of incredibly brutal encounters that could last for hours on end until laws were eventually brought in under Queensbury Rules that saw pre-determined lengths introduced.

Before the use of official judges, often these bouts ended in draws once the ‘distance’ was met and a victor would be awarded a ‘newspaper decision’ based on popular acclaim.

The longest gloved fight ever recorded is widely believed to have lasted seven hours and 19 minutes back in April 1893 when Andy Bowen and Jack Burke traded blows for a remarkable 110 rounds.

The pair’s bloody battle was ultimately deemed a ‘no contest’ when they were too exhausted to continue in New Orleans, Los Angeles. This was later changed to a draw.

Even into the early 20th century many true legends of the sport were involved in incredibly long battles before 15-rounders became more common in the 1920s onwards.

Historic names like Sam Langford, Jack Britton, Sam McVea, James J. Jeffries and Jack Johnson are among those to have contested in 20+ round bouts.

While those days are well in the past and boxing has gradually progressed with its health and safety precautions since, it’s perhaps unfair to claim the overall excitement levels and calibre of match-ups have completely faded over the modern 12 rounders.

There are plenty of epic modern-day fights that have taken place since the sport’s prominent revisions, and undoubtedly many more to come on the horizon.