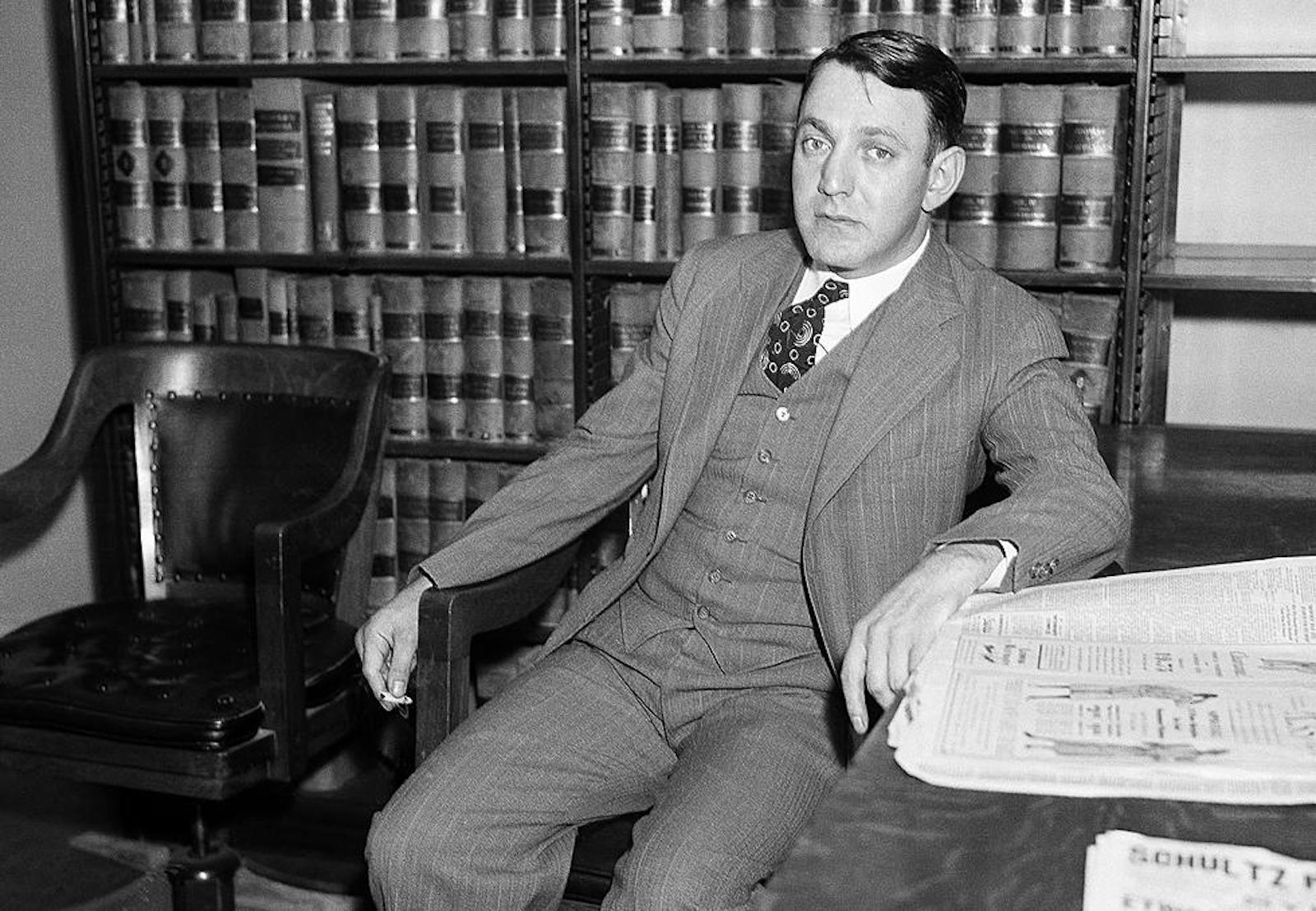 A brutal mobster and ruthless racketeer, Arthur “Dutch Schultz” Flegenheimer was one of the most intimidating figures of the 1930s.

Far from the complex philanthropy of Bumpy Johnson and the staunch activism of Stephanie St. Clair, Dutch Schultz was a stone-cold villain of the 20th century.

Schultz was determined to run New York’s most profitable numbers racket and destroyed anyone and everyone who got in the way of his rise to the top.

Known to pull the trigger without a moment’s hesitation, he instigated gang warfare faster than you could roll a pair of dice.

So, how exactly did this second-generation German immigrant ascend from the Bronx slums to become one of New York’s most infamous mobsters? Read on to find out.

Like most mobsters in the 1900s, Schultz’s upbringing was far from glamorous.

Arthur Flegenheimer was born on August 6, 1902, the son of two German Jewish immigrants, and grew up in poverty in the Bronx.

His father, a saloon keeper, abandoned the family when Arthur was 14 years old. Forced to assume the role of the breadwinner, Arthur dropped out of school and picked up a few odd – but legal – jobs around the Bronx.

His income wasn’t enough to provide for both him and his mother, so he had to start getting creative. He joined a local gang and began to rob craps games and burgle houses to earn a living.

At age 17, Arthur was caught red-handed. He was sentenced to 17 months in prison, his first – and only – time behind bars.

He was released from prison in December 1920, and it was around then that he started going by the name “Dutch Schultz.”

Some say he was given the name after another local (and equally violent) thug of the same name.

Others claim Arthur himself instigated this rebranding after the name of the company he was working for – Schultz Trucking.

Either way, one thing was clear: Arthur Flegenheimer was out, and Dutch Schultz was in.

Prohibition (otherwise known as the Volstead Act) was enacted in 1919 to reduce the crime rate in America. In reality, it was the catalyst for a massive wave of organized crime.

Not one to miss out on a money-making opportunity, Schultz decided to cash in on Prohibition.

While still working at Schultz Trucking, he began “bootlegging” – transporting liquor and beer across the border from Canada.

Schultz spent years working as a bootlegger, not just transporting but making his own beer.

He also picked up work in underground speakeasies, where he lived up to his namesake’s reputation for violence and brutality.

It was this violent streak that caught the attention of Joey Noe, owner of a Bronx speakeasy called the Hub Social Club.

Noe initially hired Schultz as security but ended up making him a partner of the club.

Together, the duo opened dozens of illegal speakeasies and breweries all across Manhattan, including in Yorkville, Washington Heights, and Harlem.

Their bootlegging business was thriving, especially after the pair began using intimidation as a sales tactic and forcing rival club owners to buy their beer.

While this massively increased both Noe’s and Schultz’s bankrolls, it also attracted the unwanted attention of other prominent mobsters.

Jack “Legs” Diamond was one such mobster. By moving their headquarters from the Bronx to Manhattan, Legs believed the pair were encroaching on his turf.

In 1928, an unknown gunman shot Noe in the street. Though he survived the attack, Noe died from his wounds a month later.

Schultz was devastated by the death of his partner in crime and vowed to take revenge.

Confident that Legs was responsible, Schultz ordered his assassination. In October 1929, Legs and his mistress were gunned down at the Hotel Monticello.

Despite sustaining five gunshot wounds, Legs lived to tell the tale. In fact, this was only one of several assassination attempts he would survive during his lifetime.

Certifiably spooked, Legs fled to Albany, where he would migrate most of his operations. Someone eventually found Legs’s Achilles heel, and he was murdered in December 1931.

Though nobody came forward to claim the murder, Schultz reportedly commented that Legs was “just another punk caught with his hands in my pockets.”

Life As A Racketeer

Legs’s departure gave Schultz almost complete domination of the New York speakeasy scene. By this point, the “Beer Baron of the Bronx” had become one of the biggest gangsters in the state.

However, the end of Prohibition meant Schultz had to find new ways to supplement his income.

His solution? The Harlem numbers racket.

Gambling was a lucrative business, particularly in Harlem. Gangsters like Stephanie St. Clair (known affectionately as the “Numbers Queen”) already had a stronghold over Harlem’s underground gambling scene.

Schultz had already proved he was not afraid of stepping on other mobsters’ toes and started using brute force to overthrow Harlem’s pre-existing rackets.

Illegal bookmakers were known as ‘policy bankers,’ and Schultz gradually became one of the most formidable policy bankers in Harlem.

Since it was played in African-American neighborhoods, New York’s rackets were predominantly Black-owned. So when Schultz started his violent tirade, policy bankers like Stephanie St. Clair saw it as a racially-motivated attack.

He gave his competitors three grim choices: Relinquish their business to him, continue to run it and hand over a share of the profits, or face the brutal consequences of choosing neither option.

When Schultz had used violence to force rival club owners into buying his beer, he had been met with little resistance. However, Stephanie St. Clair was unlike any gangster he had faced.

Instead of backing down, St. Clair fought fire with fire and launched counterattacks against Schultz’s own rackets and storefronts.

Tousling With The Taxman

During this time, Schultz was also dealing with opposition from the law. He was charged with tax evasion in 1933, and when the trial moved to a small town upstate, Schultz moved with it.

He hired a public relations team to smooth over his gangster image and donated hundreds of thousands of dollars to charity in an attempt to win over the public.

Though his scheme worked, it left a considerable dent in his bankroll.

By the time he returned to Harlem, he was in a desperate plight to gain total control of the gambling scene.

But there were two significant obstacles in his way: Stephanie St. Clair and special prosecutor Thomas Dewey (below).

Dewey had been hired by the mayor of New York, Fiorello La Guardia, to investigate Schultz and bring him down for good.

Meanwhile, the Numbers Queen was still refusing to back down from Schultz’s threats.

Nothing could make St. Clair hand over her numbers empire, so Schultz eventually ordered a hit on her life and forced her into hiding.

Wanting to do the same to Dewey, Schultz scheduled a meeting with the head of the mafia’s Five Families, Charles “Lucky” Luciano (below).

Schultz sought permission to assassinate Dewey. Fearing the attention that such a public act of aggression would bring to the underground gambling scene, Lucky prohibited it.

But Schultz – desperate and paranoid – decided to go ahead with his plans anyway.

Dutch Schultz was a powerful man, but if there’s one thing The Godfather has taught us, it’s that you don’t get on the wrong side of the mafia.

While Schultz continued with his scheme to assassinate Dewey, Lucky had come up with his own plan.

On October 23, 1935, Dutch Schultz, his accountant, and two of his bodyguards were dining at the Palace Chophouse in Newark. While Schultz was in the bathroom, two gunmen from the infamous hit squad “Murder, Inc.” slipped past security.

The men opened fire on Schultz and his posse and managed to hit them all.

However, Schultz was far from dead and lived almost 30 hours after being shot. He eventually succumbed to his wounds and died in his hospital bed.

What’s The Deal With Schultz’s Treasure?

Before he died, Schultz made several references to a secret stash of treasure.

Rather than naming his killer, he rambled on to the police about his fortune, alluding to stacks of hidden cash that were buried in the woods.

Delirious from his injuries, his messages were random and cryptic.

However, rumors about the existence and whereabouts of this so-called treasure are still rife today, with dozens of optimistic conspiracists journeying to the Catskills to uncover it.

Though there has been no actual evidence to support the theory, the Times Union released an article that claimed its value – if it actually exists – could be close to $100 million.

Regardless of his abhorrent behavior, Dutch Schultz’s journey from the Bronx slums to infamous multi-millionaire is nothing short of impressive.

Even from his early days as a Prohibition bootlegger, Schultz’s severe and unsentimental approach to his work allowed him to climb the lawless ladder.

It was this behavior that earned him the admiration of his partner-in-crime, Joey Noe, a collaboration that led to him becoming one of the most influential figures in the Bronx.

It wasn’t long before the “Beer Baron of the Bronx” branched out into the gambling business. In a merciless climb to the top, Schultz eliminated his enemies one by one, either through forced compliance or brutal (and often fatal) beatings.

His legacy as one of New York’s most infamous mobsters was solidified by the way he ran his numbers racket. With hundreds of gunmen at his beck and call, Schultz wasn’t afraid to engage in gang warfare to protect his portfolio of gambling businesses.

However, it was his desperation to become the lynchpin of Harlem’s numbers rackets that ultimately led to his demise.

His attempts to take down his most high-profile enemies – ordering a hit on Stephanie St. Clair and admitting plans to assassinate Thomas Dewey – ultimately caused his own murder.

By the year of his death, he had been named by the director of the FBI as “Public Enemy Number One.”

Despite an account-draining attempt to reconcile his public image, Schultz will forever be remembered as one of the most dangerous and violent gangsters of the era.