R. Paul Wilson On: Why You Should Read “The Expert at the Card Table” 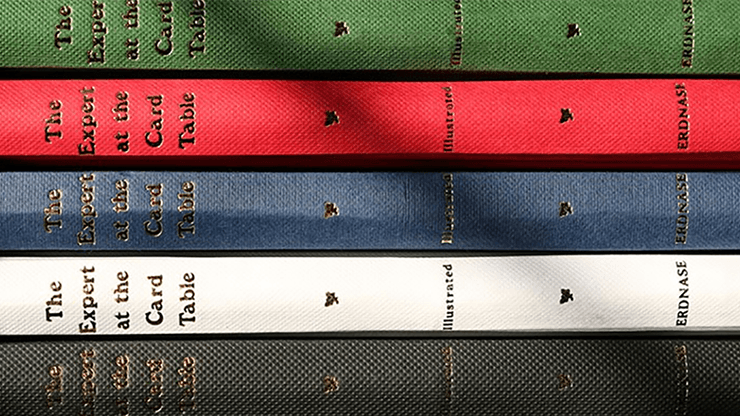 In this article, I’d like to introduce you to a book many might find interesting and, in some parts, informative when considering what’s possible in terms of cheating at the card table.

In the magic community, S. W. Erdnase’s book The Expert at the Card Table is considered to be an important, seminal work on the subject of sleight of hand with playing cards.

It features two distinct sections, the latter concerning the performance of magic with cards teaching several ingenious tricks and moves, mostly drawn from other conjuring books of the time.

It is the opening section of the book that sets Erdnase’s work apart from other books of the period since it not only exposes but teaches methods suitable for cheating at the card table.

This combination of cheating and magic was not only novel but proved extremely important to the development of card technique both for performers of miracles and stealers of money!

As a reader of this article on this site, the chances are good that you have little interest in card magic as a performer (although I strongly recommend seeking out a great close-up magician for your own entertainment) but there’s at least one important lesson to be gleaned from this book that applies to players both online and in the real world.

A Little Bit About The Book

Published in 1902, the book quietly entered the market with little fanfare other than a few ads, one of which appeared in a conjuror’s magazine from the period.

Some years later, several magicians began to sing the book’s praises and one young sleight of hand artist mined the book not only for methods and ideas but for the foundation of a new approach to card magic.

Dai Vernon was influenced not only by the magic section, which was not untypical of other books in terms of content, but by the cheating section and in particular, the advice given to potential cheaters in live games.

The writing style of the author leaned towards a serious, detailed approach to teaching the complex methods revealed in both sections.

Rather than simply expose the workings of a move like the bottom deal, Erdnase would carefully detail finger positions, pressure points and hand motion during the deal.

He would address flaws in each sleight and offer advice on timing or suggest ways he might be assisted by a partner at the table.

For the magic section, he would approach moves designed to secretly cut the deck with great precision but not written in long, dreary instructions. Instead, his text was tightly compiled to reveal more and greater detail on each analysis.

The Material – What’s Included And What’s Not

In actual fact, the book is written in such a way that the more one knows about the art of manipulation with cards, the more one gleans from Erdnase’s book. But this is in some ways a double-edged sword.

With greater knowledge of the possibilities at the card table, the more questions a student might ask about what Erdnase chooses to teach.

In fact, so much is missing from the book in terms of cheating methods from the time that an expert reader soon wonders whether the author was a professional cheater, or a magician who was fascinated and educated regarding the methods of crooked gamblers.

In fact, Erdnase states he betrays no confidences in the writing of this book, and this has been analysed for years.

Did the author invent all of the moves taught? Certainly not, since almost everything – including moves he names after himself – has been sourced to other books of the period.

So the reason for excluding other workable methods is puzzling for me and, when I was a kid, somewhat frustrating.

In the years since I first stumbled upon the book as a teenager, I’ve learned a lot more about card technique and most of what’s used by real cheaters is more practical and less fancy than the refined, almost indulgent methods shared by S. W. Erdnase.

So why is the book still held in such high regard and is it really worth studying?

For me, the reason for the book’s existence (and perhaps a huge clue as to the identity of the author) is in the book’s other title: A Treatise on the Science and Art of Manipulating Cards.

The meaning of the word “treatise” is recorded as “a written work dealing formally and systematically with a subject” – and this is exactly what Erdnase delivers both in tone and content.

In fact, Darwin Ortiz, himself a highly regarded expert on magic and gambling, notes that a key reason for reading the book is the “quality of thinking” in regard to sleight of hand with cards.

If you are at all interested in sleight of hand, either to inform yourself of what’s possible or to learn a detailed and elegant approach to the art, it is certainly worth reading.

As a player, you might glean some idea of what you might be facing across an unknown table. There’s some important advice given to cheaters concerning deportment and confederacy that all players should at least be aware of.

Certainly, the sleights are all intriguing.

Their construction and description are like manna from heaven for serious students of the art of sleight of hand but, in truth, it requires a connoisseur’s taste to fully appreciate both what is being taught and the means in which it is described.

In a way, it’s a bit like recommending Shakespeare to someone interested in seeing a play or two – it can be an acquired taste.

So let me boil it down for you:

Remarkable advantages can be obtained by manipulating cards secretly at the card table.

Cards can be culled, stacked and controlled using various techniques and what is described in this book will give you an appreciation of the kind of skill required by dedicated card thieves.

More importantly, manipulation is not necessary when two or more cheaters enter a game and manage their actions using signals or betting strategies to work together against a table of individuals.

In one short description, Erdnase instructs the reader on how to work a game without an ally (playing “single-o”) using sleight of hand to beat the cut etc. but when another cheater is at the table, methods become much easier. And if the two cheaters are sitting together, extremely simple moves can reap huge rewards.

Confederacy without sleight of hand will get most of the money most of the time and when I began playing poker seriously, I was stunned to find it was commonplace to find players who clearly worked together at the table.

Online, it can be much worse. And as online poker has evolved, providers have taken steps to identify collaborators at their tables.

In a future article, I’ll describe how I crossed the line to take on a group of collaborators with sleight of hand and the surprising lesson I learned in the process.

For now, just remember that when players collude, they can secure the kind of advantage an expert cheater could only dream of while working alone.

Back to the book.

As an interesting item to own, peruse and perhaps read just a little; of course, I think you should be interested.

If you play for money, why not learn a little about how cheaters think and operate?

But the actual information in the book is mostly outdated – there are better ways to do a lot of what’s described (though some methods remain superior, particularly for conjurors).

Perhaps you will be amused or intrigued by Erdnase’s writing style, or by his attitude towards the subject of sleight of hand both for cheating and conjuring.

His comments on various methods like marked cards and hold outs will certainly be of interest. But always think: “I wonder what’s possible these days”, because I promise anything taught or alluded to in the cheating section has been excelled.

Another Mystery: Who Was Erdnase?

One other reason to own a copy is to wonder about the author himself.

S. W. Erdnase remains a mystery and is still completely unknown to the community of magicians who continue to analyse and discuss his or her work.

Why would the writer of such a book never reveal their identity and why would they publish their work under a pseudonym that is so clearly an anagram.

Read backwards, it reads “E. S. Andrews” but it may also represent “W. S. Sanders” who is one of several candidates being considered as potential authors.

There are at least two documentaries being made on the subject but, personally, I’m not sure I want to know who wrote the book since their writing has evoked so much mystery and fascination for the art of magic.

In fact, this book may be the key to the development of close-up table magic where performers no longer had to rely on being apart from the audience and could manipulate cards under the noses of people while they watched closely, using techniques that might have started life as cheating methods.

The Expert at the Card Table is at least an important curiosity for anyone with a serious interest in cards, whether for players, performers or cheaters.

And I whole-heartedly recommend it to anyone who has read this article all the way to the end.