R. Paul Wilson On: A Beautiful Move in Poker 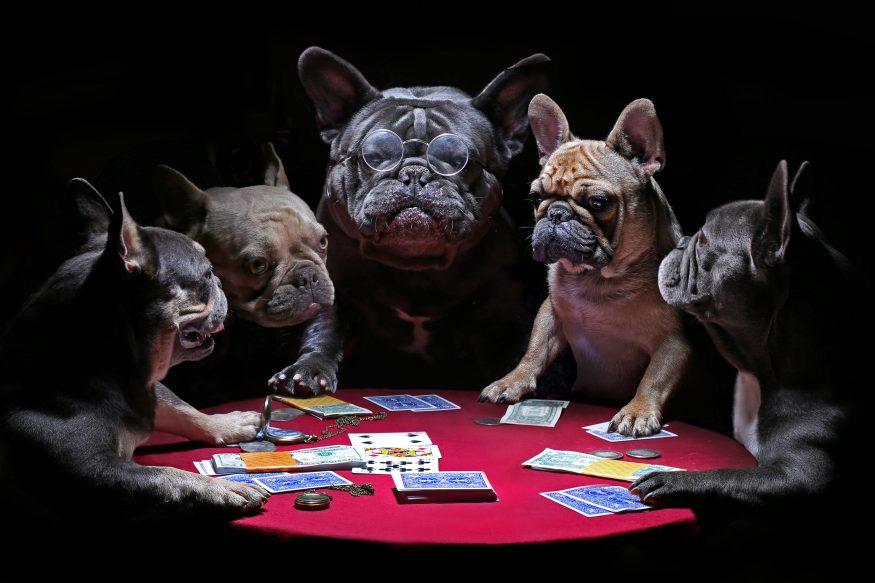 Editor’s Note: This week, R. Paul Wilson shares a story about when he took an extremely risky move during a poker game with three Glaswegian ruffians. He lived to tell the tale, so read on to find out how he pulled it off.

One night, in a large, well-appointed Glasgow apartment, I found myself head-to-head in the final stage of a seven-card stud tournament. With cards dealt by the players, the deck was in my hands every other round and across from me was a much better player with a habit of colluding with two other players.

I had already beaten the other two players by out-cheating them all but with a small crowd watching us duke it out, I was under constant scrutiny if not suspicion.

As our chips levelled out, I was in real danger of losing my advantage when an opportunity came up to take this guy out and finally beat him and his buddies at their own game.

To succeed, I needed to execute one of the most dangerous techniques in all of gambling sleight of hand, right under the noses of some of the roughest and toughest characters in one of the toughest cities in the world.

In other words, I was about to risk my balls to beat this game.

How I Got There

Okay, let’s back up a little.

In Erdnase’s book The Expert at the Card Table, he notes that collusion between players is one of the most powerful and effective ways to beat a game without the need to resort to manipulation.

When I began seeking out live games to learn how to play poker, I quickly recognised that collusion was happening all the time.

In Glasgow casinos at that time, three players in particular were constantly squeezing other players by passing chips openly and apparently playing out of the same pocket.

After about a year, I started winning through to the final tables of Pot-Limit Hold ‘Em tournaments regularly enough to see that two or all three of these players would also be in the money and, in most cases, they placed in the top three!

Put simply: if all three were at the top table it was almost inevitable that they would be in the money.

Their methods included over-betting one round to squeeze out another player, then folding all those chips to a partner in order to increase his chip count. Another was to always play the best hand of three, probably by signalling to each other (though I never picked up their code).

The truth is, they were excellent players.

And by working together they were unbeatable, unless someone had serious luck on their side – or was a better cheat.

I was frustrated and angry not only by the fact they were cheating, but because the other players tolerated it.

“What can you do, you can’t prove it.” someone told me – so I proved it to myself.

When house dealers were short, I would offer to sit in (after being knocked out) and could glimpse the colluders’ cards from the last round during a shuffle. Sure enough, they either always played the best hand or would fold strong hands when playing against each other.

So, I was in zero doubt I was against three players who were colluding and therefore (to my mind) cheating and when I was against them (twice in one week) at a final table I was poorly suited to out-play their methods.

My chance came during a private tournament in a regular player’s home game.

The game was played in an enormous Glasgow flat in a fashionable part of town with tables scattered around several rooms.

A seven-card stud tournament was an odd choice of game, but I had attended several times before and enjoyed the atmosphere, so I joined the game and ran into an unusual streak of lucky hands.

I’m not much of a stud player but I know enough to cause some trouble and managed to translate that luck into a seat at the final table alongside three familiar faces, who were up to their old tricks.

The deck was being passed between players so when we were down to the last four it was me against the unholy trinity. But this time, I had the chance to out-cheat them; three colluders against one mechanic.

All I had to do was not get caught.

Being careful, I avoided getting tangled up in any hands while the other three evened out their chips by betting and folding to each other.

It wouldn’t be long before my chips would dwindle, so I took the opportunity to glimpse a few cards after a hand and control them for the next round.

In the next round I was dealt the nuts and actually suspected these guys were cheating right back at me – the timing was too perfect – but I took out another player and the game was head to head.

Not that anyone was supporting me particularly, they just wanted to see all three get some just desserts.

Unfortunately, I was being thoroughly outplayed.

I need to point out that I’m not proud of cheating, even under these circumstances, but in my defence, I felt it was fair to respond to one form of cheating with another.

That being said, while their system was strangely accepted as “one of those things”, being caught manipulating the cards would have sent me straight to the hospital or the river!

The remaining player was also an unapologetic asshole.

While his two partners were nice guys and genuinely likeable, his tactic was to rile players up and antagonise people, so every decision I made was accompanied by a stream of insults and abuse.

So, you bet your ass I was going to screw this guy over any way I could. But with so many people watching, how could I hope to get away with it?

The answer was simple: don’t f**k it up.

We played a few rounds on the square with no opportunity to cheat but in a seemingly uneventful hand, I was sitting on a two pair prior to dealing the last down card.

While my opponent sounded off about something or other, I executed a tiny heel peek, squeezing the top card of the deck to glimpse the index of the card I was about to deal across the table.

It was the card I needed to make a full house.

Suddenly, I knew how I could beat him but it meant keeping that card for myself and as it happens, there’s a move designed for exactly this purpose: the second deal.

If you’ve ever seen the film Rounders, you’ll recall the moment when Edward Norton’s character is caught by one of the suckers who sees him “catch a hangar” (see video below).

In other words, the card being dealt from the second position or from the bottom doesn’t make it all the way out and is left hanging for a split second.

This is just one of the dangers when not dealing off the top and smart cheaters will tell you never to attempt such a move when the heat is on and people are watching.

In this scenario, everyone was watching us play and these were not police officers like in the movie (who still beat them up when caught); in fact, some of these guys were probably wanted by the police!

After years of perfecting these moves, I decided to go for it.

First, I raised and watched him call.

Then I mocked him.

Naturally, he responded with the usual cruel jibes and while all attention was on him I executed a perfect second deal, sailing the second card to his hand before dealing the original top card to myself.

It was perfect and even if you’d been staring at it, it might have fooled you.

I was so pleased with myself I almost forgot to look at the card I dealt to myself!

In For The Kill

I had made my full house and it was well hidden so when he checked his hand, I put in a small raise, hoping he would raise back in an attempt to bully me.

He did, so I re-raised and he went over the top. In seconds, we were all-in and I turned my hand to show the nuts.

Except— they weren’t the nuts.

He revealed his hand to show not just a flush but a straight flush he made with that last card!

I had him beat with two pair but because I cheated to steal a full house, I gave him the best possible hand to take me down.

What can I tell you?

I’m an excellent sleight of hand artist, a half-decent player but a bloody awful cheat.

Fate, providence and luck always conspire against me when I don’t play fair and this is only one example of several.

Afterward, while sitting in my car at three in the morning, I looked up to the still-blazing lights of that apartment where cash games would continue until morning and I reflected on the risk I took to win a little money and score a meaningless victory against three dodgy players.

Sure, they cheated by collusion but the risk they were taking was zero compared to the risk I took dealing seconds in that situation.

As our late friend Rod the Hop liked to say, “you can’t cheat and get lucky.”

I decided to take it as a sign and retired from ever screwing with the outcome of an honest game.

No matter the reason (or my bullshit justification) it was a stupid and dangerous move and I’m hugely fortunate that fortune chose to teach me a valuable lesson without costing me my legs or fingers.

That being said, it was a beautiful move.