Under Cover of Darkness, Bourne 5 Car Chase Revs Up the Las Vegas Strip

Jason Bourne may have tried to stay incognito during his first few weeks in Las Vegas, but he’s out in the open now.

We’ve been sharing Bourne scoops since the production arrived, and now we’ve had our first legit Jason Bourne encounter.

Filming of Bourne 5 is taking place in the driveway of Aria Las Vegas (Jan. 18-19, 2016). Thanks to one of our earlier reports, picked up by local news stations, lots of fans braved chilly weather to see Bourne in action.

Seeing the action being shot, pieces of the Bourne 5 puzzle are falling into place.

Accounts inside the shoot say someone is assassinated at the conference, and since it’s not Matt Damon’s character, and it’s probably not Tommy Lee Jones’ character, we’re betting it’s Riz Ahmed’s.

As happens in Bourne movies, a chase ensues.

Police and rescue units respond to the emergency, and Bourne takes off after a SWAT vehicle. That’s the scene we saw being filmed on Jan. 18, 2016, and it was awesome. And repetitive. But awesome.

The crew did many, many takes with the SWAT truck and Bourne’s Dodge Charger zipping down the Aria driveway.

Dozens of cars lined the entrance, all manned by extras. For at least six hours. Sitting in their cars. Movie making is so glamorous!

At one point, there was a potentially dangerous mishap between the Charger and the SWAT vehicle. The SWAT vehicle stopped short and changed lanes, and the Charger narrowly missed slamming into the back of the SWAT van. Here’s video of the tense moment, uneventful take first.

There were no injuries, other than to the bumper of the Charger, and the shoot continued into the wee hours.

All the chase scenes are being filmed at night, including upcoming sequences in the center of the Strip and at Riviera.

Here’s a list of the best places to watch the Bourne 5 chase on the Las Vegas Strip.

The chase sequence is expected to end dramatically at the Riviera. The exterior of the building has been lit for several days in preparation for the sequence’s climax.

The gutted casino’s interior will be dressed with slot machines and table games, and we hear at least one vehicle will crash into the casino. Which sounds so cool, our limited vocabulary isn’t adequate to describe how excited we are.

So, back at Aria, another sequence was being readied, a collision between a limo and another SWAT van. (It was an exact duplicate, so only one will appear onscreen.)

The production had three limos ready to go for three takes of the collision.

The expectation was that Matt Damon wouldn’t be around for the filming of these action sequences, as those are typically done by a film’s “second unit.” But at 2:30 a.m., the “Jason Bourne” star jumped into the Charger and did a test run down the ramp with his stunt driver.

Shortly thereafter, Damon did the drive on his own. Not the most dangerous stunt, but it was pretty thrilling seeing Jason Bourne peeling out in pursuit of the bad guys.

While there are long stretches of not-a-whole-lot on movie sets, it was a blast being in such close proximity to what is likely to be a huge hit, especially for Bourne fans (this blog is that, in case that wasn’t obvious).

We’ve got more Bourne 5 scoop than most humans can handle, including spoilers and pics inside Aria and a security breach from an earlier location, the Greyhound depot downtown.

Enjoy more photos from the set of “Jason Bourne” in Las Vegas, and if you capture pics or video of the Bourne 5 production in Las Vegas, send them our way! 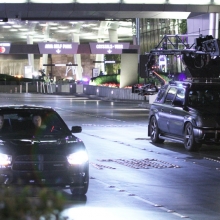 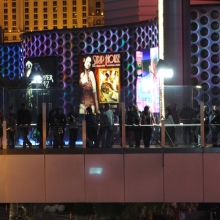 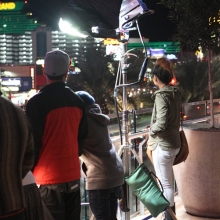 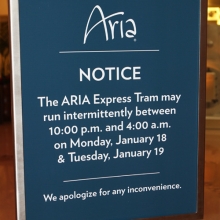 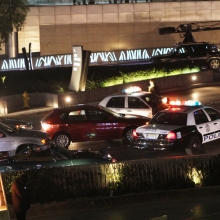 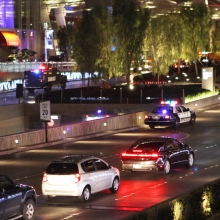 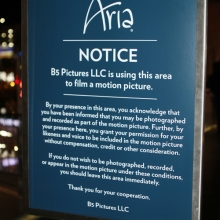 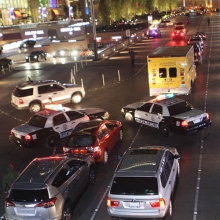 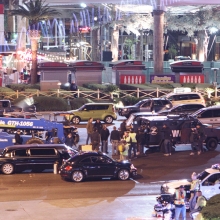 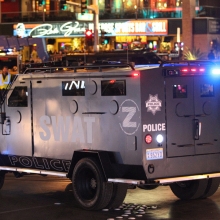 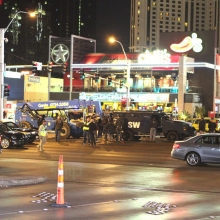 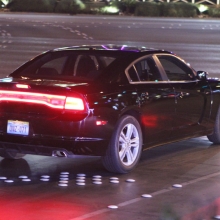 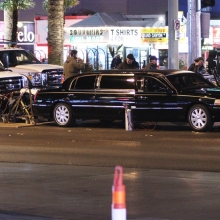 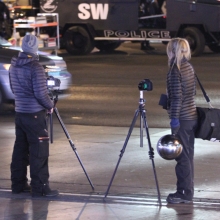 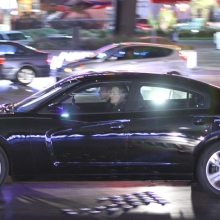 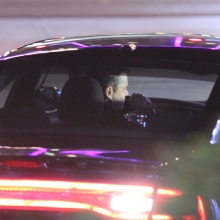 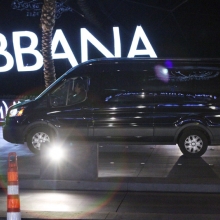 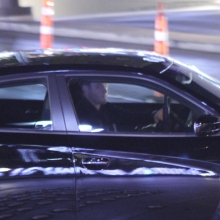 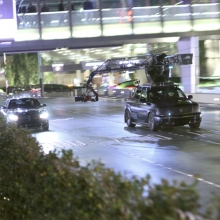 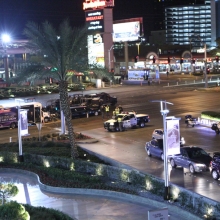 Leave your thoughts on “Under Cover of Darkness, Bourne 5 Car Chase Revs Up the Las Vegas Strip”